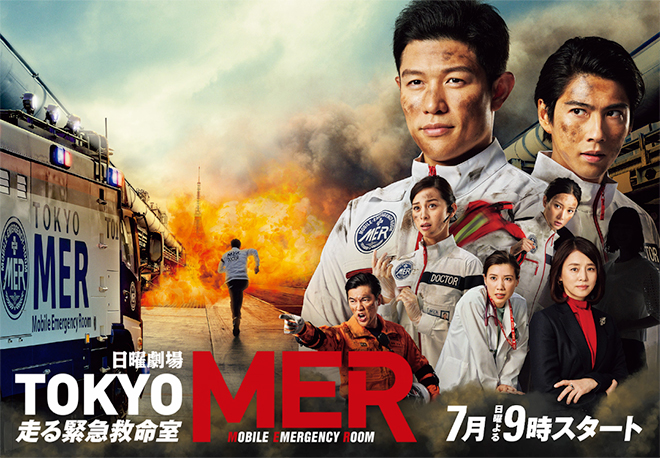 Story
The newly established Tokyo Mobile Emergency Room, or Tokyo MER for short, is a professional emergency response team created on the orders of Tokyo’s governor Akatsuka Azusa. Their mission is to save every life. They rush to the scenes of hazardous or serious accidents, natural disasters and other emergencies in their vehicle, which is equipped with the latest medical devices and a large mobile operating theatre, and quickly carry out life-saving procedures on the injured to prevent any deaths. There are seven members in the team – chief doctor Kitami Kota, resident Tsurumaki Hina, nurse Kuramae Natsume and Vietnamese nurse Hoang Lan Minh, anaesthetist Fuyuki Jiro, clinical engineer Tokumaru Motoichi and doctor Otowa Nao. Everyone is an emergency specialist. During the inauguration ceremony, Tokyo MER receives a call about people who have been severely injured in a bus accident and they rush to the scene. The team attempts an unprecedented mission to operate on numerous patients at an accident scene that is full of hazards. Handpicked by Akatsuka, Tokyo MER’s leader Kitami is a valiant emergency doctor with astounding life-saving skills. Driven by the strong belief that lives cannot be saved just by waiting, he would go into dangerous sites to save people in critical condition without any regard for his personal safety. His unconventional life-saving act is considered problematic by the Ministry of Health, Labour and Welfare and TOKYO MER is quickly thrown into a crisis of survival not long after its creation. Otowa, who is also a young elite Ministry of Health, Labour and Welfare bureaucrat, has been deployed on a secret mission to carry out the Minister’s wishes and prevent the team from obtaining official approval. But he ends up forming a close professional bond with Kota, and together the two men put their lives on the line every day to rescue others.

Characters
Suzuki Ryohei as Kitami Kota
The chief doctor of TOKYO MER. An emergency doctor who is self-assured and never gives up under any circumstances due to his experience in medical care in conflict zones and remote areas overseas. A childhood experience shaped his policy that “there are lives that cannot be saved just by waiting”. He rushes to be with patients despite the risks. He accurately diagnoses patients and carries out procedures astoundingly fast.

Kaku Kento as Otowa Nao
A TOKYO MER doctor and a bureaucrat with the Ministry of Health, Labour and Welfare. Minister Shirokane Mariko’s spy. He was dispatched to TOKYO MER on her orders to prevent the team from being granted official approval. He is the opposite of Kitami Kota – a cool-headed and ambitious guy who has an ideal medical policy that he wants to achieve. TOKYO MER’s survival depends on his assessment.

Nakajo Ayami as Tsurumaki Hina
A TOKYO MER doctor-in-training. She is unhappy about being made to double as a doctor at TOKYO MER while she undergoes training at Tokyo Kaihin Hospital’s cardiovascular surgery department. Her first choice is to be a cardiac surgeon and her ideal medical care is to carefully handle patients with a full-scale medical system. She is bewildered that surgeries are done on-site without being able to adequately examine the patient, and pushes back at Kitami Kota’s way of doing things without regard for safety.

Nanao as Kuramae Natsume
A TOKYO MER nurse. She is experienced and knowledgeable about emergency medical care and displays her skills as Kitami Kota’s right-hand person as they fight against time. She has a positive personality and likes to take on new challenges. She is a single mother with a young daughter who goes to nursery school, but she concurrently working in both emergency medical care and hospital wards because of her passion for saving lives.

Naka Riisa as Takanawa Chiaki
A cardiovascular surgeon at Tokyo Kaihin Hospital. She is a world-renowned cardiovascular specialist and also a dependable supervisory doctor whom Tsurumaki Hina admires. She gives advice to Hina who is unhappy with Kitami Kota while criticising Kitami’s reckless way of doing things. She and Kitami seem to have known each other for a long time but their relationship is unknown.

Kaname Jun as Senju Mikio
The chief of the Tokyo Fire Department’s Rapid Response Unit. It is a seasoned hyper rescue team which has saved lives at many sites. He is always pressed to make difficult decisions to quickly save lives under harsh conditions without causing a secondary disaster. As a result, he clashes head on with Kitami who tries to swoop into a dangerous sites in order to save lives.

Ishida Yuriko as Akatsuka Azusa
The governor or Tokyo. A journalist who won a seat in the House of Representatives and later became the governor. She gained popularity for her fearless demeanour and gentle smile dubbed Azusa’s smile, and is widely viewed as a prominent candidate for the country’s first female Prime Minister. She proposed the creation of TOKYO MER and appointed Kitami Kota to be its chief, gambling her political life on this team’s survival.

Watanabe Makiko as Shirokane Mariko
The Minister of Health, Labour and Welfare. A very competent member of the House of Representatives who rose up in the political world through her ability to push through her own agenda. She aspires to be the country’s first female Prime Minister. She regards Akatsuka Azusa as her greatest rival and TOKYO MER, which was created through Akatsuka’s policy, as an enemy. She is only looking at dismantling TOKYO MER in order to call attention to Akatsuka’s blunder.

This blog contains information and musings on current and upcoming Japanese dramas but is not intended to be comprehensive.
View all posts by jadefrost →
This entry was posted in Summer 2021 Dramas, TBS/MBS and tagged Ishida Yuriko, Naka Riisa, Suzuki Ryohei, Tokyo MER. Bookmark the permalink.