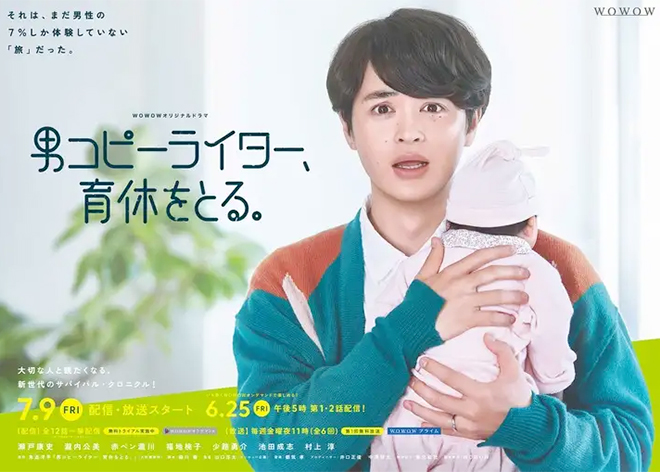 Story
Ugaeri Yohei is a copywriter who works for VN Advertising, an advertising agency. He is overjoyed when his wife Aiko announces that she is pregnant and he impulsively decides to take six months of paternity leave. It is an unprecedented move as no one at his workplace has ever taken paternity leave for a long period of half a year. After consulting his colleague Kamachi Yu who is the “master of childcare leave”, Yohei comes up with a detailed transition plan and submits his leave to his anxious boss Hamasaki Daisuke. Although he is deeply moved by the birth of his daughter, it is a fleeting moment that soon gives way to chaos. This paternity leave puts him close to breaking point with neither support from his juniors nor fixed working hours. The chaotic days gradually blur the boundary between reality and delusion. But at the same time, he also encounters a new world that was previously unknown to him. There are also a string of thorny problems such as hunting for a nursery school, making friends with other fathers and sharing childcare duties. As his six-month paternity leave filled with anxieties, struggles and fun comes to an end, what awaits him is … …

Characters
Seto Koji as Ugaeri Yohei
A capable copywriter who works for VN Advertising. While he is extremely busy at work, he learns about his wife Aiko’s pregnancy. This spurs his decision to take paternity leave. However, six months is unchartered territory at his workplace … …

Takiuchi Kumi as Ugaeri Aiko
Ugaeri Yohei’s wife. She works in a sales position at a printing company. She takes maternity leave after giving birth. Together with Yohei, she overcomes this “childcare leave barrier” with smiles at times and disagreements at others. She likes kimchi ramen.

Murakami Jun as Hamasaki Daisuke
Ugaeri Yohei’s boss at VN Advertising. He is the “first hurdle” that Yohei has to overcome after he makes up his mind to take six months of paternity leave.

This blog contains information and musings on current and upcoming Japanese dramas but is not intended to be comprehensive.
View all posts by jadefrost →
This entry was posted in Summer 2021 Dramas, WOWOW and tagged Otoko Copywriter Ikukyu o Toru, Seto Koji. Bookmark the permalink.