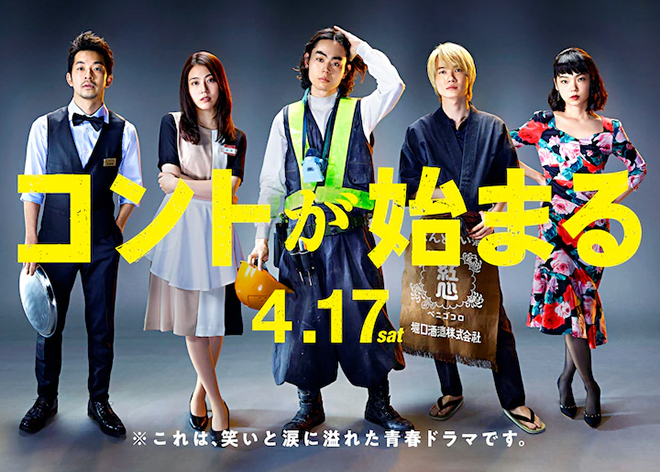 Story
Takaiwa Haruto, Asabuki Shunta and Minowa Junpei are a comedy trio called Macbeth. They appear on brightly lit stage with a skit about water problems. Nakahama Rihoko is at home watching footage of these struggling comedians begin a rambling lead in to their punch line. Haruto, the straight man of the trio which has remained in obscurity, was forced to make a decision when Macbeth was formed 10 years ago. On the other hand, Rihoko resigned from a large company a year ago for a reason and seems to become like a shell of her old self. Her younger sister Tsumugi uses the excuse of taking care of Rihoko to aimlessly work in the nightlife district. Rihoko waiting on tables at a family restaurant. The comedy trio Macbeth happen to come to this restaurant where Rihoko works. They soon become regulars and routinely create material at the restaurant. Rihoko grows fascinated as she watches their efforts and becomes a secret fan. As the days go by, Rihoko comes to realise that Macbeth is what she lives for … … However, on the day that Rihoko goes to watch them perform live for the first time, she is in for a surprise when they announce that they are breaking up. The five of them in their late 20s are all stuck in situations that anyone would call a “big failure”. But maybe this is the big lead up to glittering futures?

Characters
Suda Masaki as Takaiwa Haruto
A member of the comedy trio Macbeth. He is in charge of creating their routine. He performed a comedy skit with his classmate Minowa Junpei during their high school’s cultural festival. An incident at that time spurred him to seriously decide to make a career in comedy. However, he has not gained much popularity since then and the day that he had promised to decisively give up comedy if they were not successful in 10 years is just around the corner. He has a strong sense of responsibility and says that his routines are to blame. He takes a decision … …

Kamiki Ryunosuke as Asabuki Shunta
A member of the comedy trio Macbeth. He was often alone at home from the time he was an elementary school student. He passed the time by playing games that he was given. When he entered junior high school, he started going to a game arcade with his pocket money and was absorbed in the PvP game Puyopuyo. His life at home and outside was all about Puyopuyo and in the summer of his third year in high school, he came out top in a competition to determine Japan’s best player. After graduating from high school, he chose to be a programmer but Takaiwa Haruto and Minowa Junpei suddenly showed up and he joined Macbeth. He is not a sociable person by nature and was low profile but he was recognised after his performance at the school’s cultural festival became the topic of conversation. His interest is going to bars.

Nakano Taiga as Minowa Junpei
A member of the comedy trio Macbeth. When he was in high school, he started out as a comedian at Takaiwa Haruto’s invitation. Back then he had gone ahead to confess his heart to Natsumi, who was the most beautiful girl in school, even though everyone tried to stop him because it was impossible between them. But he succeeded. They have continued to date for 10 years and he prostrates himself once a year. Like Haruto, he is aware that the day they have to break up is approaching due to a promise he made to his parents but Natsumi’s presence weighs on his mind.

Arimura Kasumi as Nakahama Rihoko
She has been a model student from a young age and got a job at a top company that everyone knows. However one day one and a half years ago, she abandoned everything due to her circumstances at the time and resigned from the company. Her younger sister Tsumugi was worried when she could not contact her and arrived to find her on the verge of death. She was immediately hospitalised for malnutrition. She has been living with Tsumugi ever since she was discharged from hospital. She was unemployed for six months before starting a part-time job at a family restaurant nearby. While observing the comedy trio Macbeth who visit the restaurant as customers, she develops an interest in them. Before she knows it, cheering them on gives her the strength to get through life … …

Furukawa Kotone as Nakahama Tsumugi
She had not been doing anything after graduating from high school, when she was suddenly informed that her older sister Rihoko was out of contact. She went to check on her and found her in a state that was unimaginable for a former model student. After that, she started living together with her sister in Tokyo on the pretext of taking care of her, and gets a job at a bar called Ibis in the neighbourhood. She is a young lady who leads an empty life in her 20s with no goals or plans for the future.

This blog contains information and musings on current and upcoming Japanese dramas but is not intended to be comprehensive.
View all posts by jadefrost →
This entry was posted in NTV, Spring 2021 Dramas and tagged Arimura Kasumi, Kamiki Ryunosuke, Konto ga Hajimaru, Suda Masaki. Bookmark the permalink.