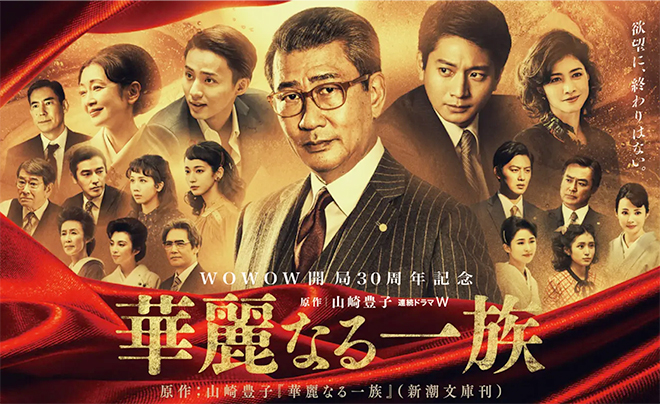 Story
Manpyo Daisuke is the owner and president of Hanshin Bank which is ranked in tenth place in terms of volume of deposits at a time when Japan is enjoying rapid economic growth after World War II. He heads the Manpyo group of companies which manages many businesses including Hanshin Steel, Manpyo Real Estate, Manpyo Trading and Manpyo Warehouses in addition to Hanshin Bank. The family has gained wealth and power through family connections in Kansai’s business circles. When Daisuke obtains information from his eldest daughter Ichiko’s husband Mima Ataru, who is an elite Ministry of Finance official, that the move to restructure the city’s banks is gathering momentum, he plots a merger with a major bank to ensure Hanshin Bank survives. The Manpyo family includes Daisuke’s wife Yasuko; eldest son Teppei, who is the senior managing director of Hanshin Steelworks; second son Ginpei who works at Hanshin Bank; second daughter Fujiko and third daughter Mitsuko and long-time live-in mistress Aiko. Aiko has great influence in the family and is pushing to create a powerful clan. Teppei and the rest find her distasteful. In addition, Teppei has decided to embark on a massive undertaking to build an in-house blast furnace in order to free the company from its reliance on raw material supplied by other companies. He asks his father for a huge loan. However, what comes to Daisuke’s minds is his ambition to ensure the survival of the bank that he controls and a suspicion regarding his son. A love-hate drama unfurls within the family from discord between father and sons to wife and mistress.

Characters
Nakai Kiichi as Manpyo Daisuke
The president of Hanshin Bank and the head of the Manpyo group of companies. He hears about the upcoming restructuring and mergers in the financial industry and wages a fierce battle for the survival of the Manpyo family.

Mukai Osamu as Manpyo Teppei
Manpyo Daisuke’s eldest son. The senior managing director of Hanshin Steelworks. Admired by company employees and loved by his mother and younger siblings, he is the conscience of the family. He bears a resemblance to his late grandfather Keisuke who founded the Manpyo group of companies.

Fujigaya Taisuke as Manpyo Ginpei
Manpyo Daisuke’s second son. The head of Hanshin Bank’s Second Loan Division. He has an impeccable fashion sense, carries out his work and always makes level-headed decisions regardless of the mood around him or flurry of people who come and go.

Uchida Yuki as Takasu Aiko
The Manpyo family’s private tutor and female butler. She is also Manpyo Daisuke’s mistress. She controls the marriages of his children and has taken it upon herself to extend the family’s alliances. She won over Daisuke with her exceptional beauty.

Aso Yumi as Manpyo Yasuko
Manpyo Daisuke’s wife. She is the daughter of Kyoto nobility and has classic Japanese beauty. Although she has been forced into the odd arrangement of living with his mistress Takasu Aiko, she has continued to maintain her composure. Although every day is like a nightmare, her children’s happiness come first.

Kaname Jun as Mima Ataru
The deputy director of the Ministry of Finance’s Budget Bureau. He is the husband of Manpyo Daisuke’s eldest daughter Ichiko. While the Budget Bureau controls the country’s finance, he knows the movements of the Banking Bureau which controls the banks.

Mimura Rie as Mima Ichiko
Manpyo Daisuke’s eldest daughter. Of the three daughters, she is the most similar to her mother. She is feminine and reserved. She was forced into an arranged marriage with Mima Ataru.

Sasamoto Rena as Manpyo Sanae
Manpyo Teppei’s wife. The daughter of Ogawa Ichiro, a former Minister of International Trade and Industry and Minister of State. She is another victim of family alliances and resents Takasu Aiko. She understands her husband.

Yoshioka Riho as Yasuda Makiko
The daughter of Yasuda Tazaemon of Osaka Heavy Industries which is a leader in Kansai’s business circles. She is introduced to Manpyo Ginpei as a prospective marriage partner. At one time, she gets a brief glimpse of the Manpyo family’s secrets and learns about the darkness in the family.