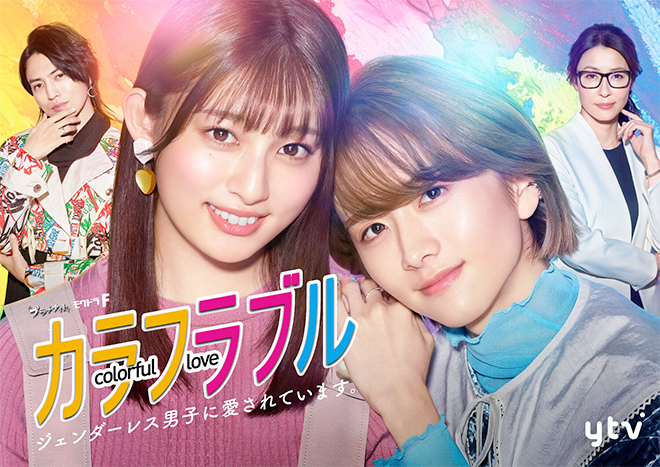 Story
Rookie manga editor Machida Wako has a weakness for beautiful things and people. But she focuses too much on her work and puts herself in second place. Wako admires her boss Tetsumoto Asahi who is always cool and shows consideration for the people around her. On one occasion, Wako is asked by a colleague who is a fashion magazine editor to help out at a photoshoot. When she arrives at the location, the popular model Kira turns up and she is captivated by his good looks. Someone comes chasing after Kira. He is Soma Meguru, Wako’s junior back in high school and a guy so pretty that he can be mistaken for a female. Meguru has been working at a fashion shop and taking charge of Kira’s styling since he came to Tokyo. This unexpected reunion catches Wako by surprise. She gets a bigger shock when Meguru suddenly hugs her and declares that he has always liked her because she saved him from bullying. The cute pair who are mistaken for sisters when they walk together, grow closer and try out dating. However, Wako feels disconcerted about going out with a guy who is too pretty.

Characters
Yoshikawa Ai as Machida Wako
A rookie manga editor who works for a publishing company. She has been assigned to the editorial department for female manga and is training under Tetsumoto Asahi who is the editor in chief. She has a weakness for beautiful things and people. During her high school days, she saved Soma Meguru from being bullied. This becomes the reason why she is loved by him. But she finds it disconcerting to date a guy who is so pretty.

Itagaki Rihito as Soma Meguru
Machida Wako’s junior during high school days. He works at a fashion shop and also styles the famous model Kira. He gets mistaken for a female because of his beautiful appearance. He fancies his own appearance and enjoys makeup and fashion which allows him to become the person he likes. His encounter with Wako was a big turning point in his life and he makes up his mind to live without being tied down to anyone.

Kiriyama Ren as Kira
A famous model who is detested by staff and people in the same industry for being a self-centred and conceited. He noticed Soma Meguru’s cuteness and ability to emphasise his best features and has Meguru accompany him as a friend and a stylist. He lacks consideration for people, has no interest in anyone besides himself and cannot even remember names. Although he thinks there is no one in this world that he will like, he actually does not know true love and has never even dated someone. Then he meets Machida Wako’s boss Tetsumoto Asahi and begins to change.

Mizuno Miki as Tetsumoto Asahi
Machida Wako’s capable boss and editor in chief. As the first woman in this role, she has been making every effort to increase the sales of female manga. She is full of ideas but this is the result of daily research. She always smiles and does not get ruffled. She is called “iron woman” as she is unwavering and does a perfect job. She believes that she does not need romance because she wants to keep calm but that assumption unravels after she meets Kira.

This blog contains information and musings on current and upcoming Japanese dramas but is not intended to be comprehensive.
View all posts by jadefrost →
This entry was posted in NTV, Spring 2021 Dramas and tagged Colourful Love, Mizuno Miki. Bookmark the permalink.