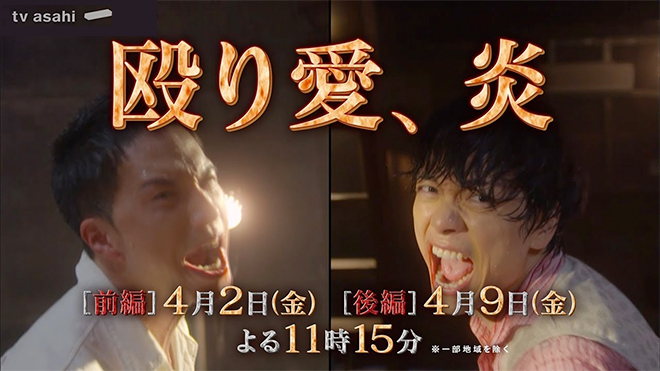 Date: From 11.15 p.m., 2 & 9 April 2021
Scriptwriter: Suzuki Osamu (Sensei o Kesu Houteishiki, Meishi Game, Ubai Ai Series)
Director: Kinoshita Naomi
Theme Song: Knockdown by Kiyoshi Ryujin
Cast: Yamazaki Ikusaburo, Takimoto Miori, Sakai Wakana, Nagai Masaru, Ichihara Hayato, Ishino Mako, Nishioka Tokuma
Synopsis: Akita Mitsuo (Yamazaki Ikusaburo) is a brilliant heart surgeon at a general hospital. He believes his hands are for saving people’s lives and promises himself that he will never ever hit a person. With his wedding to Toyoda Hidemi (Takimoto Miori), a nurse working at the same hospital, just a month away, he is on cloud nine. One day, Mitsuo is put in charge of surgery for an emergency patient Ogawa Nobuhiko (Ichihara Hayato) who suffered a heart attack. He deftly saves Nobuhiko from the jaws of death. However, the moment Hidemi is introduced as Nobuhiko’s attending nurse, the wheels of fate begin to turn in an unexpected direction. Nobuhiko is apparently Hidemi’s high school senior. When he hears that she is getting married to Mitsuo, he sincerely congratulates her. But life is never that easy. Mitsuo’s childhood friend Tokushige Ieko (Sakai Wakana), who is in love with him and expected that they would marry, eavesdropped on that conversation. In addition, she gets close to Hidemi by pretending to look out for her and manages to extract information that Hidemi had confessed her feelings to Nobuhiko in the past but was rejected. Taking advantage of this situation, Ieko plots to steal Mitsuo. She not only spreads a false rumour by making Nobuhiko think that Hidemi is troubled about Mitsuo’s violence but also stirs things up by making it known that Hidemi still likes Nobuhiko. Meanwhile, Mitsuo begins to suspect that Hidemi likes Nobuhiko. On the day of Nobuhiko’s discharge, he instinctively hugs Hidemi while they are alone in the hospital ward. However, Mitsuo shows up … …
Website: www.tv-asahi.co.jp/naguriai
Twitter: twitter.com/ubaiai

This blog contains information and musings on current and upcoming Japanese dramas but is not intended to be comprehensive.
View all posts by jadefrost →
This entry was posted in Spring 2021 Drama Specials, TV Asahi and tagged Naguri Ai, Takimoto Miori, Yamazaki Ikusaburo. Bookmark the permalink.