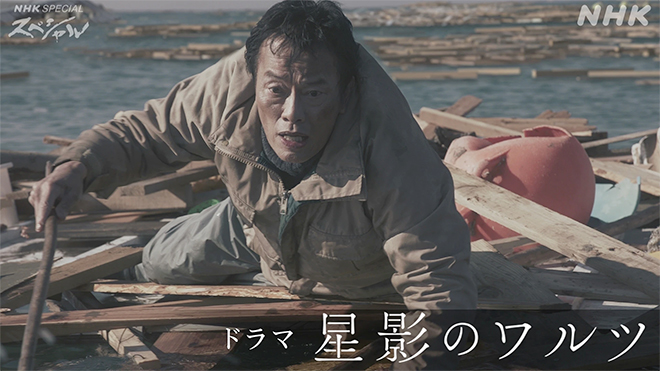 Date: From 9.00 p.m., 7 March 2021
Scriptwriters: Mineo Kento, Oishi Michiko
Cast: Endo Kenichi, Kikuchi Momoko, Kawaei Rina, Okayama Amane
Synopsis: Right after the Great East Japan earthquake struck on 11 March 2011, 60-year-old Otani Takashi (Endo Kenichi) comes back to his house in Minami Soma, Fukushima Prefecture from work. His wife Kyoko (Kikuchi Momoko) is at home and they have to seek shelter. But he cannot leave the rice seedlings as it is and carries them into the shed. From the second floor of his place, he sees the neighbour’s house engulfed by the tsunami. Kyoko runs up from downstairs to assure him. But a short while later, they feel a jolt and husband and wife end up getting separated. As Otani is carried away by the turbid waters, he manages to scramble onto a part of his house’s roof and searches for his wife. But she is nowhere to be found. Swept out to sea, he braves the unbearable cold, hunger and thirst and then witnessing the explosion at the Fukushima Daiichi nuclear plant. Otani remains adrift for 43 hours until he is rescued by a Marine Self Defence Forces’ Aegis cruiser. It tells the story of just how precious everyday life before the disaster was, and the bonds of family and the hidden strengths of humans, with footage of his rescue and of the disaster from the news mixed in.
Website: www.nhk.jp/p/special/ts/2NY2QQLPM3/episode/te/7865L8Z9ZV
Twitter: twitter.com/nhk_dramas

This blog contains information and musings on current and upcoming Japanese dramas but is not intended to be comprehensive.
View all posts by jadefrost →
This entry was posted in NHK, Winter 2021 Drama Specials and tagged Endo Kenichi, Hoshikage no Waltz. Bookmark the permalink.