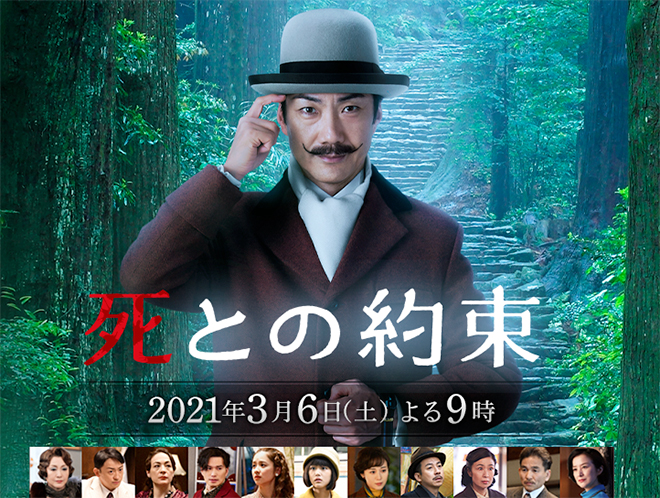 Date: From 9.00 p.m., 6 March 2021
Original Work: Appointment with Death by Agatha Christie
Scriptwriter: Mitani Koki (Sanada-maru, Orient Kyuukou Satsujin Jiken, Sutekina Kakushidori)
Director: Joho Hidenori
Cast: Nomura Mansai, Matsuzaka Keiko, Yamamoto Koji, Sylvia Grab, Ichihara Hayato, Hotta Mayu, Hara Nanoka, Higa Manami, Tsubokura Yoshiyuki, Nagano Satomi, Anan Kenji, Suzuki Kyoka
Synopsis: “You understand, don’t you? If it comes to this, I’ll have no choice but to kill.” The great detective Suguro Takeru (Nomura Mansai) picks up these disturbing words that are unbefitting for his location – a hotel along the Kumano pilgrimage route in Wakayama Prefecture that he is visiting for a vacation. At this time, things are already in motion. The next morning, when Suguro heads to the hotel lounge to have breakfast, he sees the doctor Sara Kinuko (Higa Manami) reading a medical book there and greets her. Sara knows about Suguro through the newspapers and the two of them have a friendly chat. Then Madam Hondo (Matsuzaka Keiko), her second son Mondo (Ichihara Hayato), eldest daughter Kyoko (Hotta Mayu) and second daughter Junna (Hara Nanoka) arrive at the hotel. She exudes a somewhat peculiar aura as she shouts at the hotel staff and starts issuing all sorts of orders to her children. Her eldest son Reiichiro (Yamamoto Koji) and his wife Nagiko (Sylvia Grab) arrive later. Madam Hondo seems like a dictator of her family from her behaviour and all her children are completely under her control. Suguro taken aback by this strange family. According to Jumonji Kota (Tsubokura Yoshiyuki) who says that he is an old family friend, all the members of the Hondo family have been travelling around Japan after the head of the family passed away and left enough money for them to have a good time for the rest of their lives. Suguro visits Kumano Hongu Taisha at the invitation of Sara. While he is walking around the shrine grounds, someone calls out to him from behind. He turns around to see Diet member Uesugi Honami (Suzuki Kyoka) and editor Asuka Hana (Nagano Satomi). Honami says she is visiting Kumano to write her own biography but is apparently Suguro’s old acquaintance. Two days later, the Hondo family, Suguro, Sara, Honami and Asuka take a chartered bus for a tour of the pilgrimage route. Kumano which is called a sacred site, has many mystical mountain trails and mysterious landscapes. There has also been no end to first-hand accounts of the long-nosed goblin Tengu. Each person spends time at a place of their choice. However, Madam Hondo who was supposed to be resting at a bench along a path to a shrine is later found dead from a heart attack. Suguro is asked by the chief of local police station Kawabari Taisaku (Anan Kenji) to solve the case and quickly launches an investigation. Madam Hondo has always had a weak heart. But when Suguro discovers a hypodermic needle mark in her right arm, he wonders whether she died of illness or was murdered by someone? He recalls the words that he happened to hear on the night that he got to the hotel. “You understand, don’t you? If it comes to this, I’ll have no choice but to kill.” Whose voice was that? Every family member had a motive and a chance to kill her. He is about to make deductions for the most complicated case he has ever faced.
Website: www.fujitv.co.jp/yakusoku
Twitter: twitter.com/shitonoyakusoku

This blog contains information and musings on current and upcoming Japanese dramas but is not intended to be comprehensive.
View all posts by jadefrost →
This entry was posted in Fuji TV, Winter 2021 Drama Specials and tagged Matsuzaka Keiko, Mitani Koki, Nomura Mansai, Shi to no Yakusoku, Suzuki Kyoka, Yamamoto Koji. Bookmark the permalink.