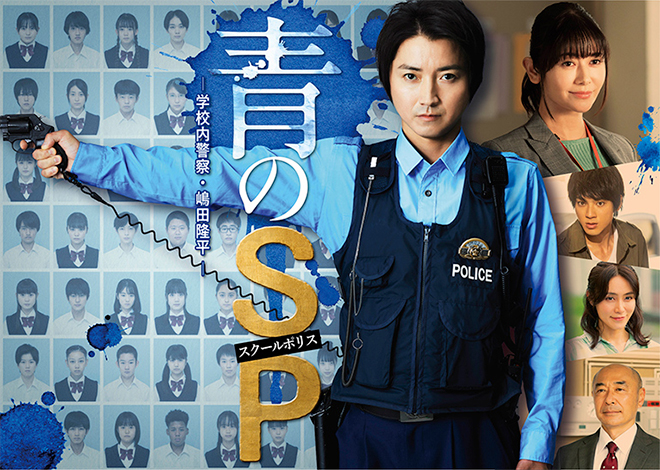 Story
Japanese language teacher Asamura Ryoko is also the form teacher of Class 3/1 at Akamine Junior High, a public junior high school. While patrolling downtown at night, Ryoko observes a junior high school student who had money taken by a group of fellow students but finds herself held at knife point instead. A police officer shows up. Even though they are junior high school students, he arrests them on the spot for extorting and assaulting students, and hands them over to Saegusa Hiroki, a detective at a police precinct’s juvenile section. The next day, Akamine Junior High is about to introduce a trial of the school police programme which has the Ministry of Education, Culture, Sports, Science and Technology’s approval. Amid the uneasiness among the teachers including Ryoko, Mizuno Kaede and Abe Yusuke, the man who arrested the students last night is introduced by the school’s principal Kijima Toshifumi. He is Shimada Ryuhei, a detective from the Tokyo Metropolitan Police Department’s First Investigation Division. When Ryoko asks for the reason why he volunteered to be a school police, he tells her, “I want to ascertain if this school’s students are worth protecting”. From the outside, Akamine Junior High seems like any junior high school but all sorts of incidents are uncovered after the school police is deployed such as social media issues, suspected drug use among students, hidden cameras, sexual harassment. Shimada shows no mercy in arresting both teachers and students if they go against the law. This results in frequent clashes with Asamura Ryoko, a Japanese language teacher who is also the form teacher of Class 3/1. Although Shimada’s methods are considered drastic, this gradually leads to various changes in the school and the hearts of students.

Characters
Fujiwara Tatsuya as Shimada Ryuhei
A competent detective from the Tokyo Metropolitan Police Department’s First Investigation Division who is assigned to Akamine Junior High on a trial basis as a uniformed police officer. He volunteered to test the effectiveness of a school police system within a school. He is always composed and acerbic. He takes on social problems that stoke public fears such as social media issues, hidden cameras and sexual harassment.

Maki Yoko as Asamura Ryoko
A Japanese language teacher at Akamine Junior High and also the form teacher of Class 3/1. She is an intelligent, passionate teacher with a strong sense of professionalism. She opposes the school police system from the beginning as considers it unnatural to have police officers in school. She always takes the side of the students. As a result, she repeatedly clashes with Shimada Ryuhei who heartlessly handcuffs students that have committed crimes.

Yamada Yuki as Saegusa Hiroki
A junior detective who becomes Shimada Ryuhei’s partner. He belongs to the Juvenile Section of Sumihama Police Precinct’s Community Safety Division which has jurisdiction of Akamine Junior High. He is very earnest and hopes to rehabilitate youths who have gone astray. Shimada often uses him at his own convenience.

Takahashi Katsumi as Kijima Toshifumi
The principal of Akamine Junior High. He is the typical type who does not want to rock the boat and agrees to the introduction of the school police in order to get on the good side of the Board of Education in consideration of his second career. He tries to cover up every problem to prevent them from getting in the way of his future.

This blog contains information and musings on current and upcoming Japanese dramas but is not intended to be comprehensive.
View all posts by jadefrost →
This entry was posted in Fuji TV, Winter 2021 Dramas and tagged Ao no SP, Fujiwara Tatsuya, Maki Yoko, Takahashi Katsumi. Bookmark the permalink.