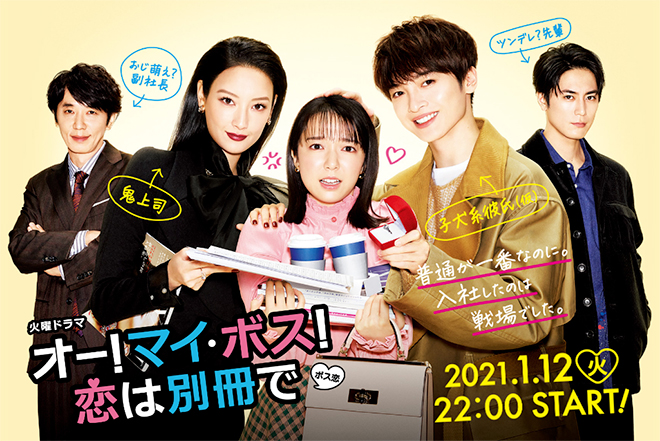 Story
Suzuki Nami wants ordinary happiness. She was born and grew up in a town in the countryside and has no particular dreams or things that she wants to do. Following after a childhood friend Hioki Kenya who is her crush and lives in Tokyo, Nami has been hunting for a job. She finds out that the equipment management department of a big publishing company Otowado Publishing is recruiting. While she is killing time until her interview, she gets acquainted with the handsome Junnosuke by chance. Although she has an accident, she is somehow able to get through the interview because of her fateful encounter with him. Nami is hired. However, she is assigned not to the equipment management department but to the newly created fashion magazine Miyavi’s editorial department instead. Nami finds herself caught in a hellishly busy life as an office girl to the very capable, caustic and cold Horai Reiko who is the youngest chief editor to date. In addition, she gets an outrageous suggestion from Junnosuke. Nami would have been fine with a decent job and romance but she discovers what is truly important to her as she observes the way Reiko works and faces the challenge of a rocky romance with Junnosuke. Her attitude begins to change and she starts to have dreams and live positively.

Characters
Kamishiraishi Mone as Suzuki Nami
Like her name suggests, she wants ordinary happiness like the average person. She interviews for a position at Otowado Publishing’s equipment management department but is assigned to a fashion magazine’s editorial department instead and becomes the office girl of the very capable, caustic and cold editor in chief Horai Reiko. In addition, she encounters the photographer Junnosuke and gets a crazy proposal from him. Both work and romance were supposed to be in moderation but she grows as she fights hard … …

Nanao as Horai Reiko
Suzuki Nami’s boss who is the editor in chief of the magazine Miyavi. She was the first Japanese editor in chief of Marie Claire in Europe at the young age of 30. She came back to Japan from Paris for the launch of Miyavi. A career woman who works round the clock, she is a super sadistic and horrible chief. It is said that money changes hands when she smiles, and it is called the “devil’s smile”. She is cold towards Nami who is half-hearted in her work.

Tamamori Yuta as Horai Junnosuke
A handsome photographer who is the son of a wealthy family. He twists Suzuki Nami around with a carefree smile and makes an outrageous suggestion to her after their fateful encounter. He may like to do things at his own pace but as he comes in contact with Nami’s kindness and warmth, his involvement with her gives him the courage to take a big step forward.

Mamiya Shotaro as Nakazawa Ryota
An editorial staff with the magazine Miyavi. He used to be in charge of a culture magazine and has no experience with fashion magazines but is called a young ace as an editor. He is a cool and matter-of-fact person. Even though he initially looks down on Suzuki Nami who is an office girl and has no dreams or motivation, he gradually starts to be attracted to her straightforward nature.

Hashizume Jun as Suzuki Yoshiro
Suzuki Nami’s father. He runs a bookstore in Kumamoto. Even thought he is over 50, he has not given up on his dream of becoming a writer, and continues to give his family a hard time.

Miyazaki Yoshiko as Suzuki Mami
Suzuki Nami’s mother. She is meddlesome and overly helpful. Her husband Yoshiro still dreams of becoming a writer even though he is over 50 now. She drills it into Nami that its best to be ordinary. She hopes that marriage to Hioki Kenya who is a certified public accountant will make Nami happy. She is unable to leave people who are in need alone but her effort often comes to naught.

Takahashi Hitomi as Horai Kaori
Horai Junnosuke and Reiko’s mother. She is a very wealthy woman who runs a paper manufacturing company in Kanazawa. Because that attracts nothing but people interested in money, she essentially has no faith in people. She wants her son to follow in her footsteps and hopes that he will quickly get married and come back home.

Kurashina Kana as Hasumi Rio
Horai Junnosuke’s childhood friend. She has a cheerful and carefree personality. After graduating from university, she became a professional violinist and left for Europe with her sights set on the world.

Santamaria Yusuke as Ugajin Shinichi
The Deputy CEO of Otowado Publishing whom the female employees adore for his eloquence, leadership and ability to lighten the mood. He is actually the person who headhunted Horai Reiko and unlike Reiko, he is amused by Suzuki Nami.

This blog contains information and musings on current and upcoming Japanese dramas but is not intended to be comprehensive.
View all posts by jadefrost →
This entry was posted in TBS/MBS, Winter 2021 Dramas and tagged Kamishiraishi Mone, Kurashina Kana, Mamiya Shotaro, Oh! My Boss! Koi wa Bessatsu de, Santamaria Yusuke. Bookmark the permalink.