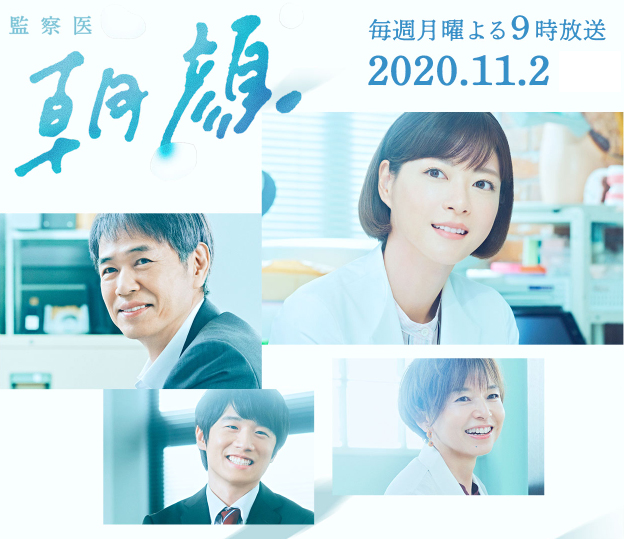 Story
Forensic pathologist Maki Asagao still works at Kouun University’s Department of Forensic Medicine in Kanagawa Prefecture. She has a happy life with her father Taira, a detective at Nogeyama Police Precinct; her husband Kuwahara Shinya, a detective at Kanagawa Prefectural Police’s First Investigation Division who used to be Taira’s subordinate; and their five-year-old daughter Tsugumi. One morning, the family is talking while having breakfast when Tsugumi suddenly declares that she wants a younger brother. As the atmosphere turns awkward, Shinya and Taira leave for work. Asagao drops Tsugumi off at her nursery school and heads to Kouun University like always. On the way there, she comes across the scene of an accident caused by a stampede on a pedestrian bridge as people panicked and tried to flee after a fire alarm system at a nearby stadium was activated. The next day, a blonde-haired guy who lost his wife in the stampede, takes a media interview at the scene and claims that this was not an accident but a murder … … Asagao lost her mother Satoko in the Great East Japan Earthquake 10 years ago and continues to feel raw grief that the body has not even been found. She and her father have leaned on each other as if to fill the void in their hearts just a little. Whenever Taira has time, he heads to the Tohoku region to search for his wife’s body. Asagao has started to overcome her grief little by little through her marriage to Shinya and the birth of Tsugumi. No one would have expected that amid the household routine, some incident would prompt Asagao to travel to the Tohoku region alone on behalf of her father to search of her mother’s dead body and the traces of her.

Characters
Ueno Juri as Maki Asagao
A forensic pathologist who works at Kouun University’s Department of Forensic Medicine. She is a loving, compassionate and sincere young woman who cares more about others than herself. However, she not only lost her mother Satoko in the Great East Japan Earthquake but continues to feel raw grief that the body has never been found. This sorrow has given her an unshakeable conviction as a forensic doctor to never allow a death to go unidentified. She will whisper “Please tell me” in front of a body before carrying out an autopsy, and is more determined and sincere than anyone else when facing it. The truth that is found occasionally exposes crime or heals the grief of bereaved families. The dead bodies talk to Asagao, conveying their final thoughts to her.

Tokito Saburo as Maki Taira
Maki Asagao’s father. A veteran detective with Nogeyama Police Precinct which often works Kouun University’s Department of Forensic Medicine. He is even more serious than his daughter. As long as there is a 1% possibility of a clue, he will thoroughly investigate even the most trivial details and will not give up on getting information even though his legs have gone stiff. Whenever he has time to spare, he still heads to the Tohoku region, just like any investigation, to continue his search for the body of his wife who has been missing since the Great East Japan Earthquake. He is very indulgent with his granddaughter Tsugumi.

Kazama Shunsuke as Kuwahara Shinya
Maki Asagao’s husband. After working at Nogeyama Police Precinct’s Violent Crimes Section, he has been extremely busy at Kanagawa Prefectural Police’s First Investigation Division. As he and Asagao are both working, they essentially split household chores and childcare duties equally. But there are also times when they rely on Asagao’s father Taira. He has a strong sense of justice and is a modest young man but also a coward and prone to worrying. After he knows about Asagao’s mother, he cries as if this incident happened to him. He emotionally connects with father and daughter with his good nature and warmth.

Yamaguchi Tomoko as Natsume Chako
The senior professor of Kouun University’s Department of Forensic Medicine. She takes pride in her work and never forgets that in the shadow of one death, lies the grief of many. Her motto is “death may come tomorrow”. An uninhibited, elusive woman of many mysteries. She understands Maki Asagao, the forensic pathologist, the best. In fact, she is the person who inspired Asagao to become a forensic pathologist. In addition, she has had a long friendship with Asagao’s father Taira, and is like an encouraging older sister to the family.

Emoto Akira as Shimada Hiroyuki
Maki Asagao’s maternal grandfather. Although he was never a jovial character, there have been times since the Great East Japan Earthquake when he is too depressingly uncommunicative. Although there were times when he did not like his son-in-law Taira for coming to the Tohoku region to search for Satoko’s body, he accepts Taira’s feelings and also searches for his daughter’s body on his own. He gets along well with Asagao and dotes on his great-granddaughter Tsugumi.

This blog contains information and musings on current and upcoming Japanese dramas but is not intended to be comprehensive.
View all posts by jadefrost →
This entry was posted in Fall 2020 Dramas, Fuji TV, Winter 2021 Dramas and tagged Emoto Akira, Kansatsui Asagao Series, Nemoto Nonji, Tokito Saburo, Ueno Juri, Yamaguchi Tomoko. Bookmark the permalink.