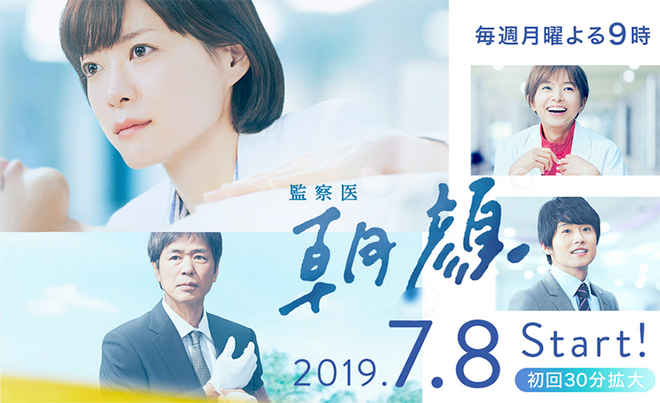 Story
Maki Asagao is a rookie forensic pathologist who works at Kouun University’s Department of Forensic Medicine in Kanagawa Prefecture. She lives with her father Taira, a veteran detective who is always by her side. However, her mother Satoko has not been around since the Great East Japan Earthquake in 2011 when she returned to her hometown along the coast of Tohoku where she grew up in order to meet her father Shimada Hiroyuki. This sorrow has given Asagao an unshakeable conviction as a forensic doctor to never allow a death to go unidentified. One day, when Asagao gets to work, lab technician Todo Emi and forensic odontologist Takahashi Ryosuke are excitedly gossiping about the detective who has transferred to Nogeyama Police Precinct’s investigation unit looking like a Hollywood star. Emi even says that she wants Asagao’s boyfriend Kuwahara Shinya, a rookie detective in the same unit, to confirm this. At the same moment, the members of the unit at Nogeyama Police Precinct are dying with curiosity to find out what kind of detective will come. Then Taira arrives. They are alerted that a woman has died in a warehouse within Nogeyama Police Precinct’s jurisdiction. Taira immediately heads out to the scene and Kuwahara is ordered to go with him. They are informed by the medical examiner that an autopsy is necessary to know the full details. As Nogeyama Police Precinct has jurisdiction over Kouun University, the police will bring any dead bodies found to the department where Asagao works. Taira and Kuwahara soon arrive at the Department of Forensic Medicine with the body. Asagao is surprised to learn for the first time about her father’s transfer to Nogeyama Police Precinct. Her boyfriend Kuwahara is even more surprised to find out that Taira is her father. So Asagao now has to work with her father.

Characters
Ueno Juri as Maki Asagao
A rookie forensic pathologist who works at Kouun University’s Department of Forensic Medicine. Although she is still a novice, she possesses outstanding skills and a wealth of knowledge that has earned her the respect of the people around her. She is a loving, compassionate and sincere young woman who cares more about others than herself. However, she not only lost her mother Satoko in the Great East Japan Earthquake but continues to feel raw grief that the body has never been found. This sorrow has given her an unshakeable conviction as a forensic doctor to never allow a death to go unidentified. She will whisper “Please tell me” in front of a body before carrying out an autopsy, and is more determined and sincere than anyone else when facing it. The truth that is found occasionally exposes crime or heals the grief of bereaved families. The dead bodies talk to Asagao, conveying their final thoughts to her.

Tokito Saburo as Maki Taira
Maki Asagao’s father. A veteran detective. He is even more serious than his daughter. As long as there is a 1% possibility of a clue, he will thoroughly investigate even the most trivial details and will not give up on getting information even though his legs have gone stiff. Whenever he has time to spare, he will head to the Tohoku region to continue his search for the body of his wife who has been missing since the Great East Japan Earthquake just like any investigation. One day, he is unexpectedly transferred to Nogeyama Police Precinct which has jurisdiction over Kouun University.

Kazama Shunsuke as Kuwahara Shinya
Maki Asagao’s boyfriend. A rookie detective belongs to Nogeyama Police Precinct’s homicide investigation unit where Maki Taira recently transferred to, after working at a police box for a long time. He has been dating Asagao since his time at the police box and it has always been his dream to become a detective. He has a strong sense of justice and is a modest young man but also a coward and prone to worrying. He is partnered with Taira. He feels a pain in his stomach every day to be with his superior who may become his father-in-law. After he learns about Asagao’s mother, he cries as if this incident happened to him and starts to emotionally connect with father and daughter with his good nature and warmth.

Shida Mirai as Yasuoka Mitsuko
A part-timer who serves as a forensic assistant. She applied just for the hourly pay and has no interest in forensic medicine. She says what she thinks without reading the situation. At first, Maki Asagao and the rest give in to her. However, she gradually changes as she interacts with them but … …

Yamaguchi Tomoko as Natsume Chako
The senior professor of Kouun University’s Department of Forensic Medicine. She takes pride in her work and never forgets that in the shadow of one death, lies the grief of many. Her motto is “death may come tomorrow”. An elusive woman of many mysteries, she behaves without inhibition. At the same time, she understands Maki Asagao the most. She is the person who inspired Asagao to become a forensic pathologist and is also the one Asagao whom trusts the most. Given her long friendship with Asagao’s father Taira, she is like an encouraging older sister to the family.

Ishida Hikari as Maki Satoko
Maki Asagao’s mother. Asagao got her loving, kindhearted nature from her. She was gentle and the sunshine of the family with her playful humour. However, she became a victim of the Great East Japan Earthquake while she was returning to her hometown along the coast of Tohoku with Asagao. She remains missing to this day.

Emoto Akira as Shimada Hiroyuki
Maki Satoko’s father. Although he never had a sunny personality, there have been times since the Great East Japan Earthquake when he gets far too quiet as if he is depressed. However, his granddaughter Asagao is the apple of his eye. He does not appear to like Taira who comes to the Tohoku region to search for Satoko’s body.