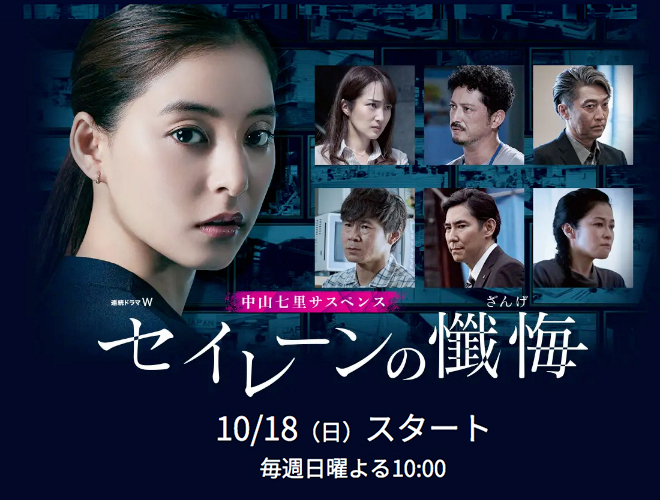 Story
The survival of Teito TV’s news programme Afternoon Japan is at stake after a series of scandals. 24-year-old Asakura Takami who is in her second year with the TV station and involved in this production, does her work with pride despite her painful past. At the same time, a high school girl called Ayaka is kidnapped in Tokyo. Takami and a senior broadcast journalist, Satoya Taichi, pursue the case in the hopes of getting a scoop to save their programme. Takami tails Detective Kudo Kenji from the Tokyo Metropolitan Police Department’s First Investigation Division and sees the body of the victim with a horribly burned face at an abandoned factory. Although Takami is caught between her personal convictions, press freedom and the unfortunate reality which overlaps with her own troubled past, she persists in going after the truth. Her tenacity pays off and she scores a big scoop related to the criminal. However, when the truth about the case is revealed, it also causes an incident to happen. Who is the true criminal of this case and what is a journalist’s “justice”?

Ikeuchi Hiroyuki as Satoya Taichi
A broadcast journalist for Teito TV’s news programme Afternoon Japan. Asakura Takami’s senior. He believes a scoop makes the news stronger. There are times when he does daring stories as he goes after a genuine scoop.

Takanashi Rin as Mishima Nanako
A broadcast journalist for Teito TV’s rival, Japan TV. While pursuing the kidnap and murder case, she reaches out to all sorts of people in order to get hold of “genuine material”.

Komoto Masahiro as
The father of the victim Ayaka. He is weary of the near daily media coverage.

Hamada Mari as
The mother of the victim Ayaka. She is worn out and troubled by the media which even descends on her workplace.

Ikeda Narushi as Hyodo Kunihiko
The chief editor of Teito TV’s Afternoon Japan. He only cares about viewership ratings and demands scoops that bring in the ratings every day.

Takashima Masanobu as Kudo Kenji
A senior detective with a murder investigation unit in the Tokyo Metropolitan Police Department’s First Investigation Division. Rank: Assistant Inspector. The ace of the First Investigation Division, he is in charge of the case involving the kidnap and murder of the high school girl. He is well-known for disliking the media and condemns the media including Asakura Takami’s sensationalised and continuous reporting of this case as well.

This blog contains information and musings on current and upcoming Japanese dramas but is not intended to be comprehensive.
View all posts by jadefrost →
This entry was posted in Fall 2020 Dramas, WOWOW and tagged Araki Yuko, Haba Yuichi, Ikeuchi Hiroyuki, Siren no Zange, Takashima Masanobu. Bookmark the permalink.