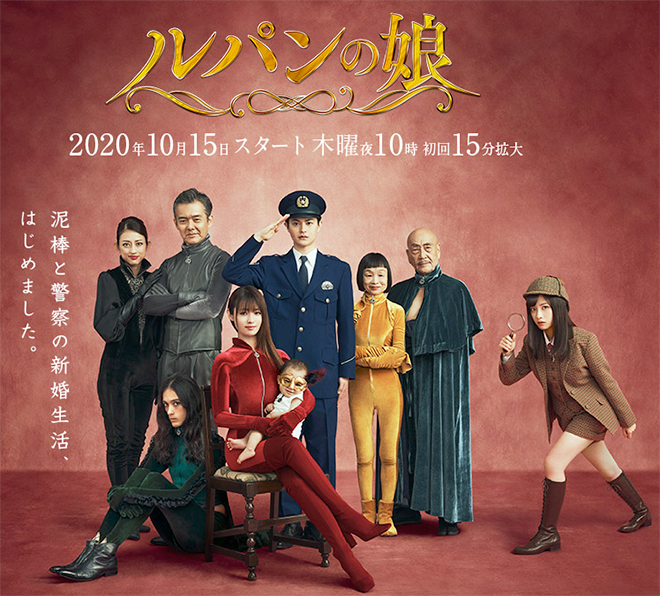 Story
Mikumo Hana and Sakuraba Kazuma decided to part forever even though they love each other because she belongs to the L clan of professional thieves that is on the nationwide wanted list. However, the two of them finally wed after her father Takeru said the family would fake their own deaths. Despite overcoming numerous obstacles, theirs is only a common-law marriage because Hana is supposed to be dead. Kazuma is made to take responsibility for dating the daughter of the L clan and demoted from the First Investigation Division to a police precinct. He naturally keeps his marriage a secret at his workplace and pretends to be a bachelor. The Mikumos moved to Kazuma’s house. However, the Sakurabas are a family of police officers. Although Hana’s father Takeru is less flashy than before, his constant thieving causes the health of Kazuma’s father Norikazu to suffer and he ends up sick in bed. Hana seizes the opportunity to move out with Kazuma when her father also vacates the Sakuraba residence. As the couple begin life as newlyweds in a shabby apartment, Hana finds herself in a predicament when the police come to make door-to-door inquiries about a neighbour that is wanted. Her father saves her from this crisis. Worried about Hana and Kazuma’s wellbeing, Takeru gives them a luxurious apartment, needless to say stolen, as a wedding gift. The catch is that it is a two-generation family residence connected to the Mikumos’ new home. Then Hana’s older brother Wataru finds a huge target – Nobunaga’s hidden treasure – and the L clan swings into action again. Meanwhile in Kyoto, junior high school student Hojo Mikumo’s grandfather Soma, who is the head of a family of famous investigators, is teaching her about being an investigator. He is pleased when she deduces the criminals in a case that actually took place. What Mikumo does not yet realise is the Hojo family’s connection with the L clan.

Characters
Fukada Kyoko as Mikumo Hana
The daughter of the L clan. She considers it a curse to be born to a family of thieves and she stubbornly refuses to take over the family business. However, she is actually the most talented at stealing among her family members. Once she wears her thief outfit, she dramatically transforms from her usual gentle self into a strong, gorgeous and sexy thief. She fell in love with Sakuraba Kazuma when they met. Even though their family backgrounds are incompatible, they eventually get married after overcoming numerous challenges.

Seto Koji as Sakuraba Kazuma
The son of the Sakuraba family which has been police officers generation after generation. Due to his strict parents, it has been decided that his future wife will be a police officer. But he chose to tread a difficult path after he met Mikumo Hana. He was assigned to the First Investigation Division which fulfilled the family’s long-cherished wish. However, he eventually takes responsibility for dating Hana and is demoted to a police precinct.

Hashimoto Kanna as Hojo Mikumo
She comes from a family of famous investigators in Kyoto. Her late father was called the Holmes of Heisei while her grandfather, whom she lives with, is called the Holmes of Showa. She strives to be the Holmes of Reiwa and has been training for it every day. While she is perceptive and has good powers of deduction, she is actually ditzy. Her family was ruined and has an enormous debt because of the L clan.

Watabe Atsuro as Mikumo Takeru
Mikumo Hana’s father who is a thief specialising in art pieces. He leads a high life in an upscale apartment building but everything is stolen goods. However, the family’s motto is to only steal from villains. He usually seems easygoing and irresponsible but he is a professional in his work. He hates the police and was also furious with Hana for dating Sakuraba Kazuma. However, he decides to support them after seeing how much she cares for Kazuma.

Ozawa Maju as Mikumo Etsuko
Mikumo Hana’s bewitching mother who is a thief specialising in jewellery. Because of her quest for beauty, she looks like she is in her late 30s even though she is about to celebrate her 60th birthday. She and her husband mess around like love birds but like Takeru, she does a great job when the time comes to steal. She does not seem to have done anything motherly for her children but she wishes for her daughter’s happiness.

Kurihara Rui as Mikumo Wataru
Mikumo Hana’s older brother. Although he is the eldest son and rightful heir of the family, he never leaves his room. A hardcore social recluse, even his parents have given up on him because he communicates in an artificial voice with the family through a tablet … … However, like father like son, he is a top hacker who steals information through the internet. He takes the big first step of trying to go for matchmaking sessions with an eye towards marriage and having an heir.

Donguri as Mikumo Matsu
Mikumo Hana’s grandmother who is an elusive locksmith. Hana looks exactly like her when she was young. Circumstances required her to undergo plastic surgery which accounts for her current appearance. It turns out that she has a deep connection with the Sakuraba family. She and Sakuraba Kazuma’s grandfather were in love with each other. There are traces that she used to pass herself off as someone from the Kansai region.

This blog contains information and musings on current and upcoming Japanese dramas but is not intended to be comprehensive.
View all posts by jadefrost →
This entry was posted in Fall 2020 Dramas, Fuji TV and tagged Fukada Kyoko, Lupin no Musume Series, Seto Koji, Watabe Atsuro. Bookmark the permalink.