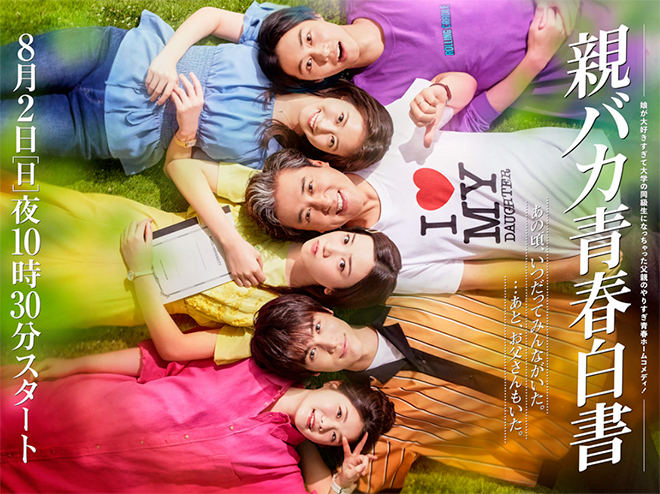 Story
40-year-old Obika Taro is a single father and a struggling novelist. Nicknamed Gataro, he raised his daughter Sakura alone after his beloved wife Sachiko died from an illness. Father and daughter get along well. But Gataro is worried sick about Sakura attending a coed university since his pure and innocent daughter has only gone to all girls’ schools. He loves her so much that he decides to take the entrance exam for the same university and enroll in the same faculty as a fellow student. Fearing that his work will be affected, Gataro hides the fact that he has become a university student from his editor Ozaki. On the first day of school, he keeps a close eye on the male students to make sure no undesirable ones cling to Sakura. However, he appears suspicious to Professor Omura, who is the professor in charge, and gets hauled up quickly. In the meantime, Sakura heads to the university cafeteria with an outspoken schoolmate Yamamoto Hiroko whom she met at the enrollment ceremony. They share a table with the handsome Hatakeyama Masaharu and thrifty Eto Misaki. But Sakura is struck by love and freezes at the sight of Masaharu being firm with an arrogant senior. As shock runs through the students who discover that both father and daughter have enrolled in the university, Gataro chooses to join extra curricular activities with Sakura to guard her. He involves himself in everything that she does such as seminars, interest groups, drinking sessions, matchmaking parties and cultural festivals. In the process, he finds himself enjoying his “youth” to the fullest.

Characters
Muro Tsuyoshi as Obika Taro (Gataro)
A father who loves his daughter so much that he decides to go to the same university. An alumni of Tokyo University, he debuted as a novelist during his school days and wedded his late wife Sachiko when they were students. Unfortunately, only one of his books did well. He enjoys his “youth” more than everyone else at the university.

Nagano Mei as Obika Sakura
Obika Taro’s sheltered daughter who is going to her first coed school in university. She inherited her late mother’s pickled plum recipe and is good at cooking. She never used to question her father but now that they are attending university together, she starts thinking that her family is probably strange.

Nakagawa Taishi as Hatakeyama Masaharu
The son of a farming family from Akita Prefecture. Although he is an agreeable young man who accepts people’s words without questioning, he is troubled by his life which is ordinary in every aspect and really wants to change it one way or another. Because Obika Sakura likes him, he gets pressured by her father Gataro.

Imada Mio as Yamamoto Hiroko
She hails from Hiroshima Prefecture and longed to live in Tokyo so much that she came to Tokyo as a university student. She becomes Obika Sakura’s first friend in university and later her good friend. She may seem like someone who loves to win but she actually cares for her friends more than anyone else.

Tozuka Junki as Negoro Kyosuke
The son of a fisherman, he is from Wakayama Prefecture. A self-professed YouTuber with a mere 20 subscribers. He is a guy who has no aspirations to make easy money, and falls in love too quickly.

Ono Karin as Eto Misaki
She comes from Fukuoka Prefecture. She is obsessed with money and does a lot of part-time jobs. Despite the impression she gives as a cool and tough person, she is also very caring.

Aragaki Yui as Obika Sachiko
Obika Taro’s late wife and Sakura’s mother. She was quick to laugh, had a cheerful personality, and supported Gataro. She taught a very young Sakura how to pickle plums.

This blog contains information and musings on current and upcoming Japanese dramas but is not intended to be comprehensive.
View all posts by jadefrost →
This entry was posted in NTV, Summer 2020 Dramas and tagged Aragaki Yui, Muro Tsuyoshi, Nagano Mei, Nakagawa Taishi, Oya Baka Seishun Hakusho. Bookmark the permalink.