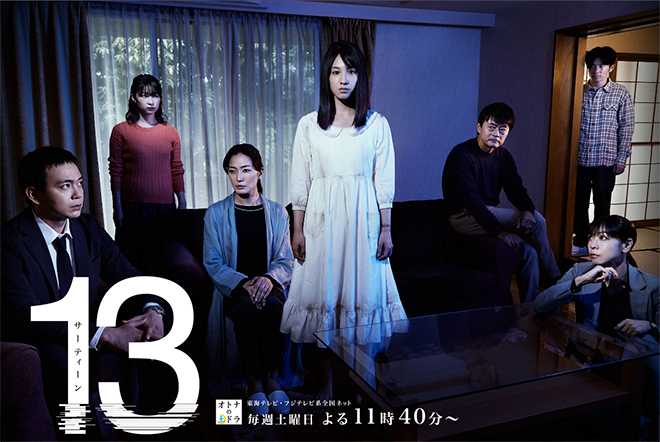 Story
An emaciated young woman staggers along a road with a vacant look on her face. Her clothes are worn-out and tattered, and she has a broken handcuff around her wrists. This woman is Aikawa Yuria who has been missing since the age of 13. Two detectives Nagai Toshihiko and Tanabe Saori are notified. “I’ve been locked up all this while,” Yuria tells them when they start questioning her. However, she goes into a panic while recalling the past. The police drop the questioning and decide to return Yuria to her family to let her recover her composure. At the Aikawa family home, Yuria’s mother Asami and younger sister Chiho are waiting anxiously for the police after receiving word that Yuria was found unharmed. Then Yuria’s father Soichi arrives. The family had broken up in the wake of Yuria’s disappearance and Soichi has been living apart. Torn between regret over the loss of her daughter and her belief that Yuria will return alive, Asami now wants them to play the part of the close family that they once were to make Yuria feel at ease at home. Soichi reluctantly agrees while Chiho watches them with a chilly attitude. Yuria’s return home immediately comes to the attention of the public and starts to change her family’s lives. She may look 26, but emotionally she is still a 13-year-old. Even though Yuria says she was kidnapped, she does not say her captor’s name or remember the place where she was confined. The detectives begin to suspect that she is hiding something and doubt her statement because she contradicts herself and changes her story several times. In the midst of this, a second case happens in a neighbouring town. Then the truth that Yuria has been hiding comes to light.

Characters
Sakuraba Nanami as Aikawa Yuria
She suddenly disappeared at the age of 13. 13 years later, she returns to her family under the protection of the police but she does not belong there. Her boyfriend is living with a different woman and her parents have separated. At first, she draws attention as the beautiful young victim but when the possibility that she knew the male criminal by sight emerges, public sentiment turns against her in a sudden reversal. Even her family does not know who she really is after 13 years apart.

Itaya Yuka as Aikawa Asami
Aikawa Yuria’s mother. She has been waiting for the day her daughter comes back and has left her room untouched. However, she has been too focused on her older daughter. She and her husband Soichi put the blame on each other and she is resented by her younger daughter Chiho. When Yuria returns, she wants the scattered family members recreate the family of 13 years ago to help Yuria recover emotionally. She is the happiest that her daughter has come back alive but deep down she has mixed feelings and she is eventually forced to come to terms with a secret that she had hidden.

Aoyagi Sho as Nagai Toshihiko
A detective in charge of Aikawa Yuria’s case, he is an intense person who hates crime. As he investigates Yuria who has no one to turn to, he is mesmerised by her mysterious charm. He wavers over whether she is truly a victim or the little fiend that the public says she is. Although there are occasions when he lashes out at his boss who is the head of the Criminal Affairs Division, he is no match for his partner Tanabe Saori.

Yui Ryoko as Tanabe Saori
A strong-willed senior detective who is paired with Nagai Toshihiko. She is candid and sarcastic, and occasionally harsh on her subordinates. She is outstanding in her work and always tries to read the flip side of things. Sensing that Nagai has been enchanted by Aikawa Yuria, she is wary of her and is tough in the investigation.

Ishikawa Ruka as Aikawa Chiho
Aikawa Yuria’s younger sister. She resents the fact that all the family’s concern was on her missing sister while she was neglected. She also feels inferior to her beautiful sister and this inferiority complex manifests in her initial refusal to acknowledge Yuria when she returns. She is hunting for a job but has had poor results so far and this adds to her stress.

Inoue Yuki as Hioki Wataru
Aikawa Yuria’s boyfriend at the time she went missing. A kind, simple and honest guy. He now runs his own juice shop. After Yuria’s disappearance, he started living together with a female classmate who had been by his side all along and they are now engaged.

Jinbo Satoshi as Aikawa Soichi
Aikawa Yuria’s father. He feels responsible because at the time Yuria disappeared, he was busy with work and paid no attention to his family. The incident took a toll on his relationship with his wife Asami. He soon had an affair with a subordinate at work and has lived apart from Asami since five years ago. He reluctantly goes along with Asami’s suggestion when Yuria comes home alive. They start living together as a family of four again but … …

Fujimori Shingo as Kurokawa Kazuki
The man who kidnapped Aikawa Yuria 13 years ago. He has been deprived of love because he was neglected by his mother. He does something shocking after he loses Yuria. But … …

This blog contains information and musings on current and upcoming Japanese dramas but is not intended to be comprehensive.
View all posts by jadefrost →
This entry was posted in Fuji TV, Summer 2020 Dramas and tagged 13, Itaya Yuka, Sakuraba Nanami. Bookmark the permalink.