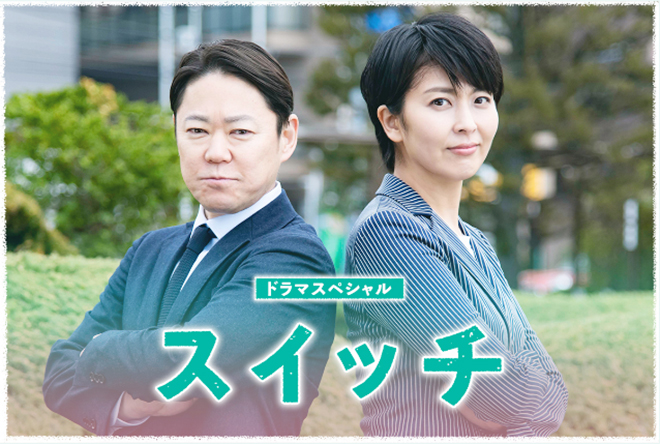 Date: From 9.00 p.m., 21 June 2020
Scriptwriter: Sakamoto Yuji (Anone, Quartet, Saikou no Rikon Series)
Director: Tsukikawa Sho
Cast: Matsu Takako, Abe Sadao, Mashima Hidekazu, Nakamura Anne, Ishibashi Shizuka, Kishii Yukino, Inowaki Kai, Sakoda Takaya, Shinohara Yushin, Hara Hideko, Shimada Kyusaku, Okabe Takashi, Omi Toshinori, Takahata Atsuko
Synopsis: Prosecutor Komazuki Nao (Abe Sadao) from the Yokohama District Public Prosecutors Office’s Minato Mirai branch and lawyer Tsutaya Madoka (Matsu Takako) from the law firm Yokohama Gold dated for seven years since the time they were in school. Even after they broke up, they have continued to be hopelessly linked to each other. One day, Nao and Madoka arrange a meal in order to introduce each other’s significant other. Nao’s girlfriend Sato Aki (Nakamura Anne) is a cooking expert while Madoka’s boyfriend Suzuki Takashi (Mashima Hidekazu) works for an advertising agency. After the awkward dinner with Aki and Takashi, each couple ends up boarding the ferris wheel to enjoy the night scenery. By some amazing coincidence, both Nao and Madoka get proposals during the ride but … … Meanwhile, there is a new development in a case that Nao is in charge of – a series of incidents in Minato Mirai where someone has been shoving passersby in the back and running away. The seventh victim saw the culprit and just as it seems that there will be a breakthrough in the investigation, a person turns up dead. While case has been considered unimportant thus far, the situation immediately escalates as a result of this death. However, a young man called Oki Kazuma (Shinohara Yushin) who voluntarily submitted to police questioning, confesses to the crimes. In addition, clothing fibres from the seventh victim are also found on Oki’s gloves. Although the police can request an arrest warrant for now, Nao feels a sense of crisis at the snap decision made despite the absence of evidence of murder. Then one day, Madoka is asked the head (Takahata Atsuko) of Yokohama Gold, to represent Oki. This is an important case for the law firm because Oki’s father is considered a significant client as the presumptive CEO of a major construction company, and they have to secure the young man’s release. Madoka had decided not to accept any criminal cases due to some reason. However, she reluctantly ends up defending Oki with some conditions attached. In the meantime, material evidence is found. While reading the investigation report, Nao discovers a mistake. He is also shocked to learn that Madoka has become Oki’s lawyer. As the two of them pursue the truth from different standpoints, they see each other more and more. When the astounding facts hidden behind the seemingly simple case come to light, the time comes for Nao and Madoka to make a life choice … …
Official Website: www.tv-asahi.co.jp/switch

This blog contains information and musings on current and upcoming Japanese dramas but is not intended to be comprehensive.
View all posts by jadefrost →
This entry was posted in Summer 2020 Drama Specials, TV Asahi and tagged Abe Sadao, Matsu Takako, Sakamoto Yuji, Switch. Bookmark the permalink.