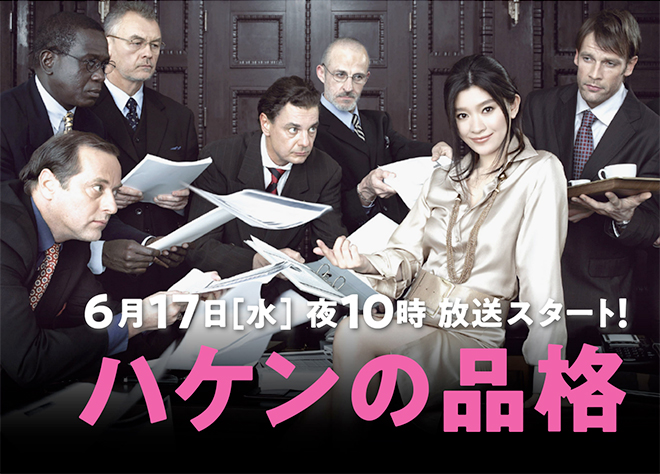 Story
Omae Haruko, the legendary A-rank super temporary worker who possesses many skills and qualifications. She will only do the scope stipulated in her contract and never works overtime or on her days off. Although she baffles her colleagues, they gradually come to accept her. The hiring system in Japan where new graduates were set for life if they got into a company and became full-time employees ended in the Heisei era. It is an illusion now and the Japanese people have also shown big changes in their attitudes towards work. With work reforms, ageing population, gigs, outsourcing, AI, death from overwork, what will Haruko’s style be in the Reiwa era? The food company S&F has lost momentum and business is on the decline. Satonaka Kensuke who has become the manager of its Marketing and Sales Promotion Division, is eager for the return of Haruko whom he had worked with 13 years ago. Uno Ippei, the head of the Sales Department, is flabbergasted that one of Haruko’s conditions is no overtime work but she declares that she will work hard for the three months she is paid and they will not regret hiring her. Having heard about Haruko’s return, Shoji Takeshi who is now the deputy manager of S&F’s Asahikawa branch office, comes back to Tokyo. He is delighted to meet Haruko again but is completely ignored by her. Meanwhile, Satonaka assigns Haruko to act as an interpreter for an important business meeting with a Russian company that will determine the company’s fortunes. However, the talks held on a cruiser that lies at anchor are on the verge of breaking down. In the midst of this, Satonaka gets a call from a new temporary employee Chiba Konatsu. She asks for help and says that she and a fellow temporary employee Fukuoka Aki have been locked up by people from human resources. It seems that this happened because she had anonymously complained that Aki was being sexually harassed by a male colleague but this backfired on them. Something unthinkable is about to happen to all of them as a result of a decision that Haruko makes … …

Characters
Shinohara Ryoko as Omae Haruko
A highly paid “Special A” rank super temp from the temporary employment agency Haken Life, she possesses many qualifications which are very difficult to obtain. She neither helps out in work that is beyond the scope she is given at the company that she has been sent to nor works overtime or on her day off. In fact, she wants no part of the corporate office culture and its politics. She will not work at the same company for more than three months due to a past experience. She is good at flamenco. She has the habit of saying, “And so? (Any problem with that?)”

Koizumi Kotaro as Satonaka Kensuke
The manager of the Sales Department’s Marketing and Sales Promotion Division for the food company S&F. He feels a vague sense of unease about the company’s future and calls Omae Haruko back to S&F. Although he had feelings for Haruko 13 years ago, he realised that she liked someone else and held back.

Katsuji Ryo as Asano Tsutomu
A senior staff with the Sales Department’s Marketing and Sales Promotion Division at S&F. He often encounters setbacks because of his propensity to overreact and be hasty.

Sugino Yosuke as Ide Yutaro
A new unmotivated employee who belongs to S&F’s Sales Department. He joined the company through his relative’s connections.

Kamiji Yusuke as Kon Kosaku
A manager at Haken Life. He has good computer skills. A temporary employee who accepted an offer to become a permanent employee, his life is constantly run by work.

Oizumi Yo as Shoji Takeshi
The deputy manager of S&F’s Asahikawa branch office. He still believes that Japanese company employees should present a united front. He is eyeing a promotion to headquarters.

Ito Shiro as Miyabe Renzo
The CEO of S&F who is popular with employees. He appears to be an affable man but he actually favours his company employees and hates temporary staff.

This blog contains information and musings on current and upcoming Japanese dramas but is not intended to be comprehensive.
View all posts by jadefrost →
This entry was posted in NTV, Spring 2020 Dramas and tagged Haken no Hinkaku 2020, Ito Shiro, Koizumi Kotaro, Oizumi Yo, Shinohara Ryoko. Bookmark the permalink.