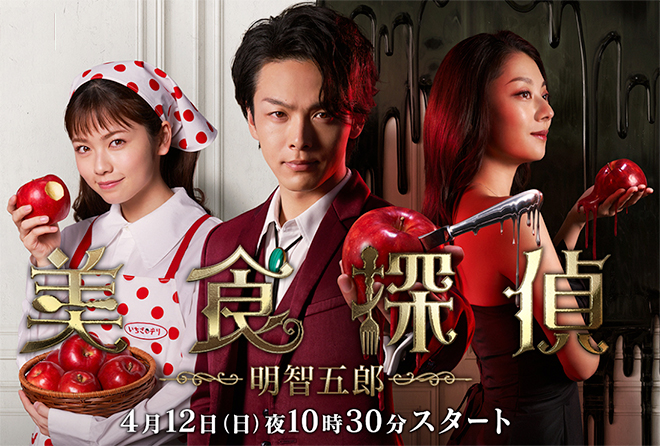 Story
Private investigator Akechi Goro runs Edogawa Investigation Agency in a multi-tenant building near Omotesando. is connoisseur of good food and lives for every meal. Handsome but very eccentric, he uses his exceptional knowledge of food to solve food-related murders. He treats Kobayashi Ichigo, the owner of his favourite Ichigo Deli, like an assistant and gets her involved in all sorts of cases even though she has only just made his acquaintance and is perfectly happy just running her food truck. One day, a housewife who is troubled by her husband’s infidelity, visits Akechi. He has been coming home smelling of different food every day and she is suspicious about what he has been up to. Akechi is loathe to sacrifice his lunch time to investigate the matter. However, Ichigo empathises with the housewife and promises to deliver a lunch box to Akechi. He determines that the husband has been spending an hour every day at lunch time at a young woman’s house, proving the housewife’s instincts right. As Akechi eats a meal that the housewife had quickly prepared after he reported on the investigation, he is enchanted by her melancholic smile and tells her to set her true self free. However, she transforms into a serial killer after meeting him and they find themselves drawn to each other despite their adversarial relationship as sleuth and murderer.

Characters
Nakamura Tomoya as Akechi Goro
A private investigator who runs Edogawa Investigation Agency. He has a passion for good food. He is good looking, has refined manners and exceptional powers of deduction. However, he is quite an eccentric and throws the people around him into confusion due to his unique way of speaking. His trademark outfit is a wine red suit and loop tie. He is actually the son of the owner of the swanky Ohgiya Department Store.

Koshiba Fuka as Kobayashi Ichigo
The owner and chef of the food truck, Ichigo Deli. She is constantly recruited by her bothersome regular customer Akechi Goro to be his assistant. Her palate and culinary skills become key to solving cases. Akechi calls her Kobayashi #1!

Kitamura Yukiya as Katono Toru
A veteran detective with the Tokyo Metropolitan Police Department’s First Investigative Division. Rank: Inspector. He does not like Akechi Goro to stick his nose into investigations. However, he is a pathetic guy who always ends up needing assistance. He gets Akechi’s help to join the Tokyo Gourmet Club which has dinner parties once a month but he is obviously no gourmet.

Sato Kanta as Takahashi Tatsuomi
A rookie detective with the Tokyo Metropolitan Police Department’s First Investigative Division. Rank: Assistant Inspector. He respects and admires Akechi Goro. Furthermore, he is willing to blabber investigation information to Akechi, and follows his orders over those of Katono Toru who is his superior. He is actually a graduate of Tokyo University and on the career track.

Zaizen Naomi as Akechi Suzue
Akechi Goro’s mother. She is the only person whom he cannot say no to. She married into the Akechi family which has owned Ohgiya Department Store for generations, and displays her management talent as the current deputy CEO. Although her father-in-law and son are both gourmets, she is quite hopeless where flavours are concerned.

Koike Eiko as Maria Magdalena
She used to be an ordinary housewife. Suspecting that her husband was having an affair, she asked Akechi Goro to investigate him. However, making Akechi’s acquaintance drastically changes her life. She awakens to her “true self” and transforms into a bloodthirsty killer, staging one murder after another to get his attention. She calls herself Maria Magdalena and manipulates her underlings.

This blog contains information and musings on current and upcoming Japanese dramas but is not intended to be comprehensive.
View all posts by jadefrost →
This entry was posted in NTV, Spring 2020 Dramas and tagged Bishoku Tantei Akechi Goro, Kitamura Yukiya, Koike Eiko, Koshiba Fuka. Bookmark the permalink.