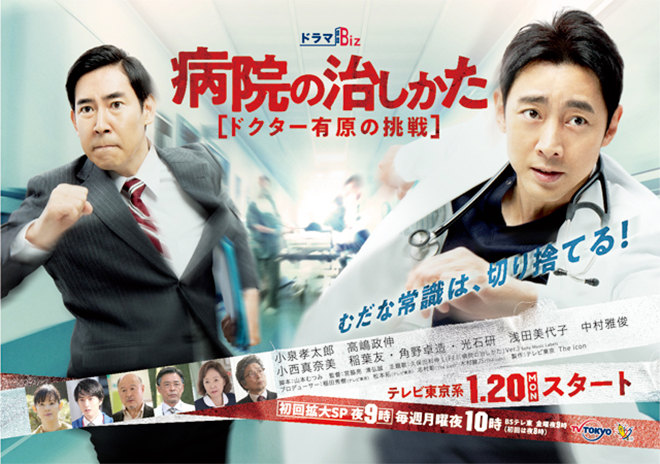 Story
Arihara Shuhei works for a university hospital in Tokyo and has devoted himself to research on catheter-based treatment. One day, he receives a phone call from his family. His father Shotaro, who is the former director of Arihara General Hospital, has suffered a stroke. Shuhei hastily returns home for the first time in six years, but Shotaro has fallen into a coma. He hears from the head nurse Hyodo Etsuko that the hospital is heavily in debt and on the brink of bankruptcy. According to her, the management of the hospital has been deteriorating since his uncle Kenjiro took over as the chairman and director of the hospital. Shuhei is lost for words. In addition, Kenjiro had been moving forward with a bank plan to sell off the hospital behind the scene. Although Shuhei later becomes the new hospital director, he sees the terrible situation on the ground with his very own eyes. The medical staff are working on their own terms and not for the patients. Shuhei decides to take on reforms the together with Kurashima Ryosuke, the deputy manager of Kaishin Bank’s loan department, based on his conviction that hospitals should be for patients.

Characters
Koizumi Kotaro as Arihara Shuhei
He gives up a promising career at a university hospital in Tokyo to head Arihara General Hospital, and fights to rebuild the hospital. He is passionate to the point that he is occasionally called “reckless express”.

Takashima Masanobu as Kurashima Ryosuke
The deputy manager of Kaishin Bank’s loan department. He has an honest and sincere personality and is a kind man who values family. He works together with Arihara Shuhei to proceed with the hospital’s reforms.

Konishi Manami as Arihara Shiho
Arihara Shuhei’s wife. She works as an editorial designer as she firmly supports him.

Asada Miyoko as Hyodo Etsuko
The head nurse of Arihara General Hospital. She watches out and supports Arihara Shuhei like an older sister.

Nakamura Masatoshi as Yoneda Masateru
The vice president of Kaishin Bank. He has supported Arihara General Hospital since Arihara Shotaro’s time. Although he understands Arihara Shuhei and Kurashima Ryosuke, there are occasional flashes of his hard-headedness as a banker.

Owada Shinya as Arihara Shotaro
Arihara Shuhei’s father. The honorary director of Arihara General Hospital. A well-known doctor who is loved locally. He continuously expanded the hospital for the sake of patients and the community but … …

This blog contains information and musings on current and upcoming Japanese dramas but is not intended to be comprehensive.
View all posts by jadefrost →
This entry was posted in TV Tokyo, Winter 2020 Dramas and tagged Byouin no Naoshikata Series, Koizumi Kotaro, Takashima Masanobu. Bookmark the permalink.