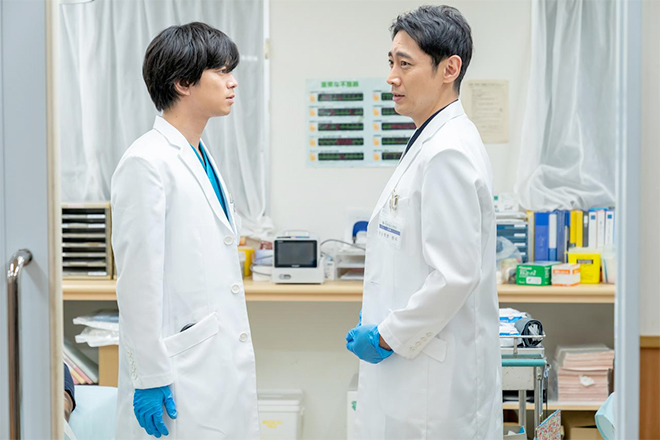 Date: From 8.00 p.m., 26 July 2021
Scriptwriter: Yamamoto Mutsumi (Byouin no Naoshikata, Kounodori Season 1, Yae no Sakura)
Director: Kiyohiro Makoto
Cast: Koizumi Kotaro, Takashima Masanobu, Kato Shigeaki, Konishi Manami, Yamazaki Shigenori, Inaba Yu, Masuoka Toru, Asada Miyoko, Kadono Takuzo
Synopsis: The coronavirus which suddenly appeared in January 2020, rapidly spread around the world and overwhelmed hospitals in many parts of the world. Arihara General Hospital, a local hospital in Japan, was no exception. Due to fears that a cluster would develop in the hospital, they refrained from accepting outpatient consultations. The hospital’s director Arihara Shuhei (Koizumi Kotaro) and office manager Kurashima Ryosuke (Takashima Masanobu) have to grapple with financial difficulties once again. However, it was surprisingly the small Arihara Minami Hospital that was started three years ago, which saved it from this predicament. At that time, Arihara Hospital had many elderly patients with mild conditions as if it had transformed into a medical facility for old people. Surgeries, which are assigned high points under the Japanese medical system, dropped sharply, and the hospital fell into a chronic deficit as revenue stayed flat. Therefore, Shuhei decided to establish the region’s first new hospital with the ability to support hospital discharge and home-based medical treatment. This was such a wild idea amid cashflow problems that there were understandably many dissenting opinions but it was the light of hope that illuminated the future. Although Arihara Hospital has managed to tide through the pandemic, they have no time to catch their breath before the next adversity hits. It comes in the form of a government push to reorganise and consolidate hospitals. The construction of a large-scale hospital in the same area is part of the pursuit of an aggressive policy that disregards the fact that small hospitals will go bankrupt. Shuhei raises a red flag and resists with all his might but … …
Website: www.tv-tokyo.co.jp/premiere8_drama/lineup/naoshikata_sp
Twitter: twitter.com/Biz_byouin

This blog contains information and musings on current and upcoming Japanese dramas but is not intended to be comprehensive.
View all posts by jadefrost →
This entry was posted in Summer 2021 Dramas, TV Tokyo and tagged Byouin no Naoshikata Series, Koizumi Kotaro, Takashima Masanobu. Bookmark the permalink.