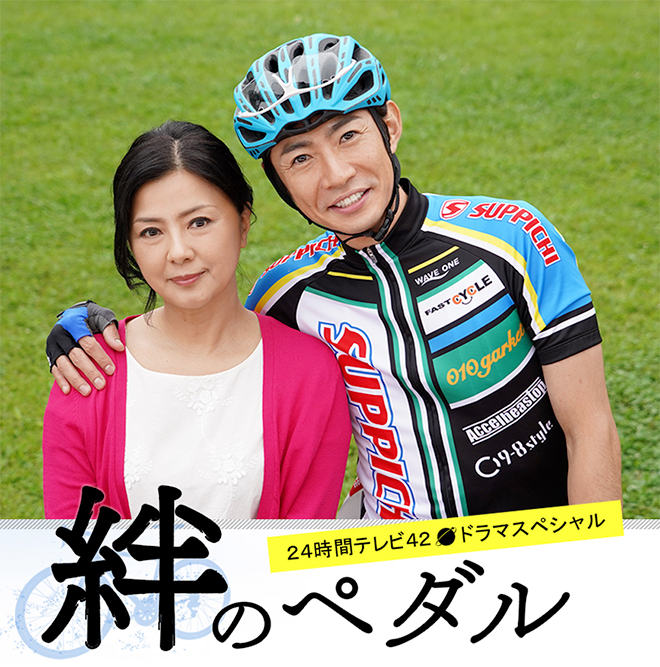 Date: From 9.00 p.m., 24 August 2019
Scriptwriter: Matsuda Yuko (Seigi no Se, Tokyo Tarareba Musume, Hanasaki Mai ga Damattenai Series)
Cast: Aiba Masaki, Yakushimaru Hiroko, Sakai Wakana, Haru, Tanaka Kei, Fujii Takashi, Takahashi Kyohei, Imai Yuki, Horike Kazuki, Tagawa Shunji, Hiraoka Yuta, Takahashi Tsutomu, Koyanagi Yu
Synopsis: With distances of 200 km, road racing is called the most demanding sport. One man achieved a miracle in the world of competitive cycling, overcoming numerous difficulties to become a top athlete. His name is Miyazawa Takashi (Aiba Masaki).When Takashi (Takahashi Kyohei) was a junior high school student, he declared his intention to be a professional cyclist after watching the Tour de France on television. His mother Junko (Yakushimaru Hiroko) knew that her son had found something that could engross him and decided to give her full support. After graduating from high school, Takashi went on to become a professional cyclist. He surmounted ordeals with his mother and was just one step from realising his dream to be the top cyclist in Japan. Then Junko was diagnosed with liver cancer and given one to two years to live. A liver transplant from a living donor was the only way to save her life. Takashi was the first to tell her doctor that he would donate his own liver. However, undergoing the transplant operation meant putting an end to his career as a professional cyclist. Believing in his own future, Takashi decided to give it a go. Believing in her son’s future, Junko supported him.
Official Website: www.ntv.co.jp/24h-drama2019

This blog contains information and musings on current and upcoming Japanese dramas but is not intended to be comprehensive.
View all posts by jadefrost →
This entry was posted in NTV, Summer 2019 Drama Specials and tagged Aiba Masaki, Haru, Kizuna no Pedal, Tanaka Kei. Bookmark the permalink.