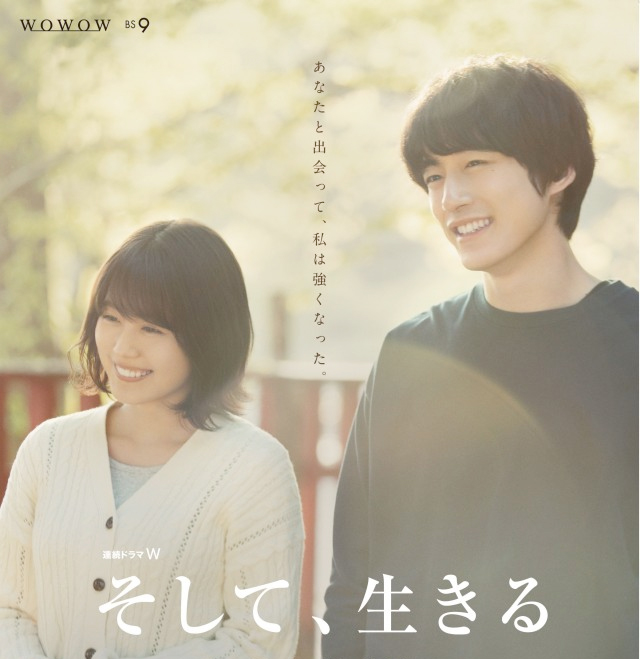 Story
Ikuta Toko’s parents died in a traffic accident when she was three years old. She was adopted by her father’s older brother Kazutaka who runs a barber shop in Morioka, Iwate Prefecture, and grew up happily. Toko was occasionally active as an idol in her hometown and eventually aspired to become an actress. When she turned 19, Toko decided to try for an audition that was being held in Tokyo. However, on 11 March 2011, the day before her performance, the Great East Japan Earthquake struck. That autumn, Toko participates in volunteer activities in Kesennuma in Miyagi Prefecture together with Han Yuri, a Korean coworker at the cafe. This is where she meets Shimizu Kiyotaka, a Tokyo University student who is an executive committee member of a student volunteer group. Kiyotaka runs operations on the ground quietly and systematically, but Toko feels something is off about his smile for some reason. She has no way of knowing his own cruel fate. As Toko and Kiyotaka spend time together in Kesennuma, they begin to develop special feelings for each other. When the volunteer activities end, the two of them return to their own lives in Morioka and Tokyo feeling renewed. Toko works at the cafe as she sets sights on becoming an actress with greater fervour than before and devotes herself to lessons every day. Kiyotaka follows his family’s wishes and gets a job at a major general trading company but struggles over whether he is truly on the right path. They keep in contact through emails and phone calls and their feelings for each other grow stronger.

Characters
Arimura Kasumi as Ikuta Toko
Her parents died in an accident when she was 3, and she grew up with her uncle Ikuta Kazutaka in Morioka. She played an idol in her hometown as she worked part-time at a cafe. She dreamt of going to an audition and becoming an actress to ease her uncle’s burden. She is kind-hearted and cheerful. On 11 March 2011, she was about to go to Tokyo for the audition but that was the day when Great East Japan Earthquake struck. Wanting to help the reconstruction in some way after that, she decided to participate in volunteer activities in Kesennuma with her friend Han Yuri.

Sakaguchi Kentaro as Shimizu Kiyotaka
A Tokyo University student. He grew up in the lap of luxury in a family of four. His father holds an important post at a major corporation, his older sister is a doctor and his mother is a full-time housewife. After the Great East Japan Earthquake stuck, he became an executive committee member of a student volunteer group to find things that he can do, and visits Kesennuma frequently. He always has a smile for people and is trusted by the locals and fellow volunteers. His volunteering experience in Kesennuma subsequently takes on great significance in his life.

Ji-young as Han Yuri
She works part-time at the same cafe in Morioka as Ikuta Toko. She has travelled around the world and worked in each place as she studied. She is a naive young woman who lives as she wants. After the Great East Japan Earthquake happened, she was initially fearful of earthquakes and tried to go back to South Korea. However, she goes along with Toko’s suggestion and participates in the volunteer activities in Kesennuma together with her.

Okayama Amane as Kubo Shinji
Ikuta Toko’s junior in the same high school. He was rejected by Toko whom he once had a crush on. His job in Tokyo is not going well. He was picked by a CEO who runs a solar power company and has been working as a salesman.

Mitsuishi Ken as Ikuta Kazutaka
He runs a barber shop in a shopping street in Morioka’s. He adopted his niece Ikuta Toko after her parents passed away. He is a bachelor and always by Toko’s side watching over her. His signature dish is a Morioka specialty called Hittsumi-jiru.

Minami Kaho as Shimizu Mieko
Shimizu Kiyotaka’s mother. She constantly thinks about her son’s future and is an education-obsessed parent. She hopes he will get a job at the same company that her husband works at and have a bright future. She is concerned when he devotes himself to volunteer activities more them job hunting.

This blog contains information and musings on current and upcoming Japanese dramas but is not intended to be comprehensive.
View all posts by jadefrost →
This entry was posted in Summer 2019 Dramas, WOWOW and tagged Arimura Kasumi, Mitsuishi Ken, Okada Yoshikazu, Sakaguchi Kentaro, Soshite Ikiru. Bookmark the permalink.