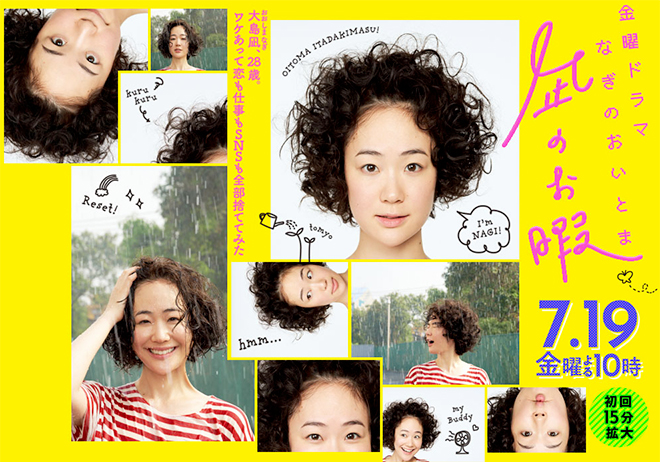 Story
28-year-old Oshima Nagi works for a home appliance manufacturer in Tokyo. She constantly gauges people’s moods and goes along with whatever others say or do to keep the peace. Her goal is to pass each day without incident. However as a result of reading too much into situations, she gets ordered to redo work by her “well-meaning” colleagues and dumped unreasonable tasks every day until she collapses from hyperventilation. One day, a careless comment by Nagi’s boyfriend Gamon Shinji breaks her heart. It prompts her to reexamine her life, and she makes the decision to change it. Nagi quits work, vacates the apartment she is living in, stops communicating with everyone including Shinji and even cancels her mobile phone line. Planning to turn her life around and be happy, she also stops straightening her natural curly hair, which was a painstaking one-hour ritual she used to do every morning. Nagi moves to a small, shabby apartment in the outskirts of Tokyo. She was supposed to lead a happy, carefree life not bound to work or anyone. However, she ends up being concerned about people’s views and picking up on the mood all the same. Nagi begins to change her life while surrounded by Shinji who has run after her, Arashiro Gon, her new next-door neighbor, and the new people she meets.

Characters
Kuroki Haru as Oshima Nagi
An employee who works in sales administration. Unlike her showy colleagues, she works silently. She has a complex about her natural curls and spends one hour every morning to straighten her hair. She dresses in conservative clothes like a TV announcer so that she does not intimidate other females. She is earnest and has a mild personality. She strives to read between the lines of the conversations of fellow female colleagues with the goal of getting through each day without incident. But one day, she snaps. She quits the company, work, cancels the contract for the apartment she is living in and also stops communicating with everyone including her boyfriend Gamo Shinji. She stops straightening her natural curls and tries to turn her life around and become happy.

Takahashi Issei as Gamon Shinji
Oshima Nagi’s ex-boyfriend. Before she quit, they worked at the same company’s sales department. He may behave impertinently but remembers to be solicitous. He is constantly top in sales with his ability to get into the pockets of the bosses at client companies. Although he is perfect at work, he is dreadfully tactless with Nagi.

Nakamura Tomoya as Arashiro Gon
Oshima Nagi’s new neighbour who says he is an event organiser but has an air of danger. A strange man unlike anyone she has ever met. He is open minded with everyone, kind and good at listening. He is an unbelievably popular guy. Everyone eventually gets by overwhelmed by the pleasant atmosphere he creates with a smile that envelopes the other party whole.

Ichikawa Mikako as Sakamoto Ryoko
A former company employee who is still searching for a job at the public job placement office despite her good academic results. In contrast to Oshima Nagi who reads too much into situations, she cannot sense the atmosphere. Her encounter with Nagi was the worst but … …

Takiuchi Kumi as Adachi Kokoro
Oshima Nagi’s ex-colleague. She had instinctively pushed odd jobs on Nagi with a smile. Although she caused Nagi to quit the company, she does not realise this. She is interested in Gamon Shinji.

Katahira Nagisa as Oshima Yu
Oshima Nagi’s mother. She brought Nagi up on her own and raised her strictly. She now lives alone in their hometown of Hokkaido. Even though she contacts Nagi once in a while, it makes Nagi stiffen. It is this relationship with her mother who was a strict disciplinarian that conditioned Nagi to read situations.

Yoshida Yo as Shiraishi Misuzu
A single mother with a daughter Urara who is in the fifth grade in elementary school. She gets acquainted with Oshima Nagi as fellow neighbours after Nagi, a former latchkey kid, becomes friendly with Urara whose situation is very similar to her own. She tends to get put down by Nagi and other mothers around her but … …

This blog contains information and musings on current and upcoming Japanese dramas but is not intended to be comprehensive.
View all posts by jadefrost →
This entry was posted in Summer 2019 Dramas, TBS and tagged Kuroki Haru, Nagi no Oitoma, Takahashi Issei, Yoshida Yo. Bookmark the permalink.

1 Response to Nagi no Oitoma