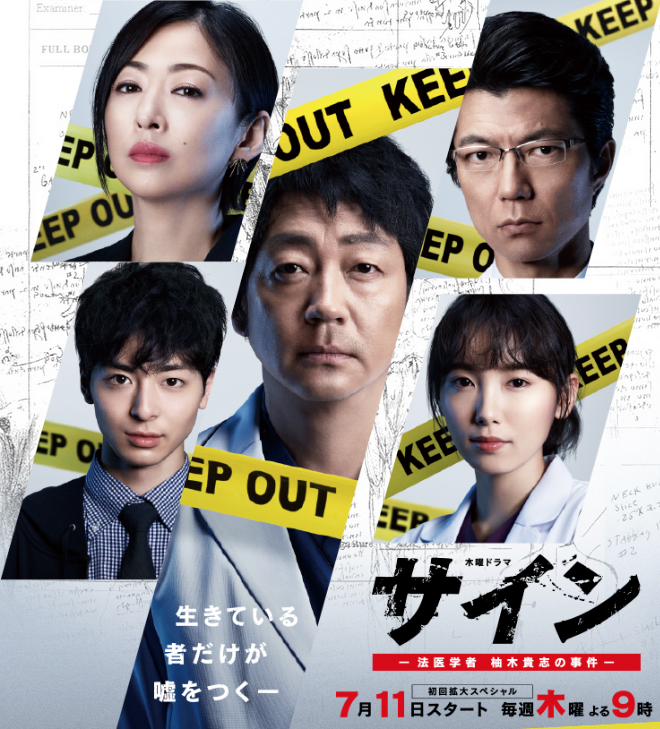 Story
The Japan Forensic Research Institute is co-managed by the Ministry of Health, Labour and Welfare as well as the National Police Agency. The forensic pathologists listen to the silent voices of the dead but come up against the powerful who cover up inconvenient truths. One of pathologists is the eccentric Yuzuki Takashi will pursue the truth and justice without yielding to authority. Despite failures, setbacks, betrayals and intrigue, the pathologists and their associates press on in their quest for signs of the truth left on the bodies and justice. In every case, the “truth” they uncover exists side by side with the “truth” fabricated by those with power. They find themselves in a fierce fight to the finish as both sides try to establish that their “truth” is the actual truth. In the midst of this, a popular national singer Kitami Eiji is found dead in the waiting room at a live show venue. However, no proper fingerprints can be lifted from the scene. It is not an exaggeration to say that Kitami’s dead body is the only evidence. Izumi Chisato, a director of the Tokyo Metropolitan Police Department’s First Investigation Division, gives instructions for his body to be taken to the Japan Forensic Research Institute immediately. Meanwhile, the police obtain information of Kitami’s quarrels with the CEO of the agency that he belongs to as well as his stylist who was the first person to discover his body. However, Chisato puts the investigation on hold until the autopsy results are out. Hyodo Kuniaki, the director of the Japan Forensic Research Institute, entrusts Kitami’s autopsy to Yuzuki. However, right before the autopsy, he is unexpectedly interrupted. Date Akiyoshi, a professor of forensic medicine at a national university, suddenly shows up at the request of the Tokyo Metropolitan Police Department, and tells Yuzuki that he will be conducting the autopsy. Kitami’s death has led to maneuvering behind the scenes by someone with immense power beyond imagining, and the “truth” that the pathologists arrive at will get buried in darkness.

Characters
Omori Nao as Yuzuki Takashi
A pathologist at the Japan Forensic Research Institute. A forensic doctor who is honest to a fault, he does not yield to authority in the pursuit of truth and justice. He is the best pupil of the institute’s head Hyodo Kuniaki, and his skill in conducting autopsies are topnotch. Although he has an extremely sharp tongue and is an obstinate, prickly person, he is a warm person deep down – a side that he hardly displays.

Matsuyuki Yasuko as Izumi Chisato
A director of the Tokyo Metropolitan Police Department’s First Investigation Division. Strong-willed and gutsy, she is an ambitious woman who has set her sights on becoming the division’s first female chief. She channelled her frustrations with the overwhelming male dominated police organisation to worked hard and get to where she is today. She and Yuzuki Takashi used to date and they were even engaged to marry for a time. She is usually a cool and calm person but behaves badly when drunk.

Iitoyo Marie as Nakazono Kei
A rookie pathologist at the Japan Forensic Research Institute. She approaches forensic medicine sincerely. She volunteers to be a pupil under Yuzuki Takashi, the best pupil of Hyodo Kuniaki, the director of the Japan Forensic Research Institute whom she respects. She does not lose heart and hangs on even though he tyrannises her. She is a naive young woman who thrives on adversity. In fact, a relative of hers was involved in some incident in the past … …

Takasugi Mahiro as Takahashi Kirito
An assistant inspect at the Tokyo Metropolitan Police Department’s First Investigation Division. Izumi Chisato’s subordinate. A lady-killer and lone wolf. He is still inexperienced because of his youth but he has good intuition as a detective and is excellent at his work. Although Chisato’s intensity makes him feel nervous sometimes, he is not daunted and speaks frankly. He can be quite impertinent but he is impossible to hate.

Nishida Toshiyuki as Hyodo Kuniaki
The director of the Japan Forensic Research Institute. He believes even the dead have human rights and is the “conscience of Japan’s forensic medicine community” who continues to listen sincerely to the silent voices of the dead. To Yuzuki Takashi, he is a benefactor and foster parent. He is fond of him and also acknowledges his skill in autopsies. He is soon put in an unexpectedly difficult position … …

Nakamura Toru as Date Akiyoshi
A professor of forensic medicine at a national university. He asserts that “the truth is bestowed upon the winner” and is a dangerous man who is close to those with power. He is even willing to falsify autopsy results in order to protect himself. He once fought for the Japan Forensic Research Institute director’s position with Hyodo Kuniaki and lost. But he is still eyeing that position now.

This blog contains information and musings on current and upcoming Japanese dramas but is not intended to be comprehensive.
View all posts by jadefrost →
This entry was posted in Summer 2019 Dramas, TV Asahi and tagged Iitoyo Marie, Matsuyuki Yasuko, Nakamura Toru, Nishida Toshiyuki, Omori Nao, Sign, Takasugi Mahiro. Bookmark the permalink.