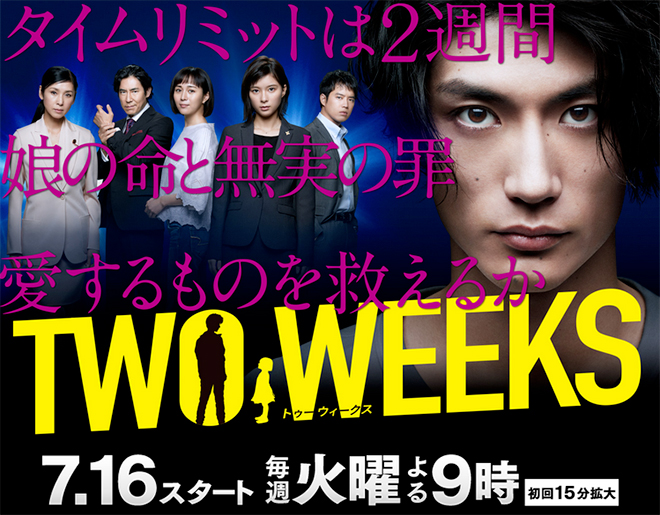 Story
Yuki Daichi previously served time for attempted murder and now feels no hope in life. He spends each day just living for the moment. Then one day, his girlfriend Aoyagi Sumire, who was the only one he ever loved deeply but told him they were over because of some incident, shows up. She says that she gave birth to their daughter whom she calls Hana. Hana is now 8 years old and has leukemia. Although Yuki is bewildered this sudden revelation of his daughter’s existence, he feels a fatherly affection when he meets Hana for the first time at the hospital. As luck would have it, Yuki learns that he is a match with Hana and this gives him meaning in life once again. Meanwhile, Tsukishima Kaede has taken the path of a prosecutor with the support of the lawmaker Kuga Sahoko who is an old family acquaintance. She has continued with her own investigation into the case that drove her father to his death eight years ago in order to take revenge on the mastermind. Then a collaborator who had got close to the mastermind as Kaede’s spy is found dead. Yuki was at the scene where the body was discovered and ends up getting arrested for a murder. With the bone marrow transplant surgery scheduled to take place two weeks later, Yuki decides to go on the run in order to save Hana’s life. The police including detective Arima Hirotada as well as the Kaede, who wants to confirm the truth behind her collaborator’s death, try to track him down. In addition, Shibasaki Kaname, a businessman and long-time acquaintance of Yuki, is also alert to these movements … …

Characters
Miura Haruma as Yuki Daichi
A man who previously served time for attempted murder and now feels no hope in life. He is suddenly informed by his ex-girlfriend Aoyagi Sumire who broke up with him eight years ago, that their daughter called Hana has leukemia. While visiting the hospital for a bone marrow examination, he happens to meet Hana and his paternal instincts being to grow. Just when he is scheduled for a bone marrow transplant surgery two weeks later after he is found to be a match, he is framed for murder and arrested. However, he decides to go on the run.

Yoshine Kyoko as Tsukishima Kaede
A rookie prosecutor with a strong sense of justice. She belongs to the Tokyo District Public Prosecutors Office’s Konan branch office. After graduating from university, she immediately passed the bar exam. She is efficient in her work but can be careless sometimes. She has been investigating an attempted murder that led to her father’s death eight years ago for the sake of take revenge against the mastermind. When her collaborator who holds the key to the case is found murdered, she comes forward as the prosecutor to track down Yuki Daichi who was happened to be at the scene of the incident.

Higa Manami as Aoyagi Sumire
Yuki Daichi’s ex-girlfriend. She is now engaged to detective Arima Hirotada. Eight years ago, she told Yuki that she was breaking up with him and secretly gave birth to their daughter Hana. She raised Hana on her own as a single mother. She visits Yuki in order to find a suitable donor for Hana who has leukemia, but she does not tell Hana or Arima that Yuki is donating his bone marrow.

Miura Takahiro as Arima Hirotada
Aoyagi Sumire’s fiance. An outstanding detective with Sakurada Nishi Police Precinct, he has keen insight and makes level-headed decisions. He prides himself in having the highest arrest rate in the precinct. A kindhearted man, he has been devotedly supporting both Sumire and her daughter Hana. He is put in charge of the murder case where Yuki Daichi was framed, and hunts for him without realising that he is Hana’s father.

Takashima Masanobu as Shibasaki Kaname
A businessman who is the CEO of Shibasaki Corporation. Besides running a diversified business including high-end clubs and pawnshops, he has amassed customers through investment consulting seminars. He appears to be a capable man but he is a cunning person who will resort to illegal and unethical means to get what he wants. He is an old acquaintance of Yuki Daichi and is also connected to the incident eight years ago.

Kuroki Hitomi as Kuga Sahoko
A lawmaker who is Tsukishima Kaede’s strongest ally and confidant. She made the acquaintance of Kaede’s family in her former job as a lawyer, and encouraged her to become a prosecutor. She treats Kaede like a daughter. She has taken the initiative in policy related to pediatric care because of her experience with her only son who has serious heart problems, and enjoys strong public support.

This blog contains information and musings on current and upcoming Japanese dramas but is not intended to be comprehensive.
View all posts by jadefrost →
This entry was posted in Fuji TV, Summer 2019 Dramas and tagged Higa Manami, Kuroki Hitomi, Miura Haruma, Miura Takahiro, Takashima Masanobu, Two Weeks, Yoshine Kyoko. Bookmark the permalink.