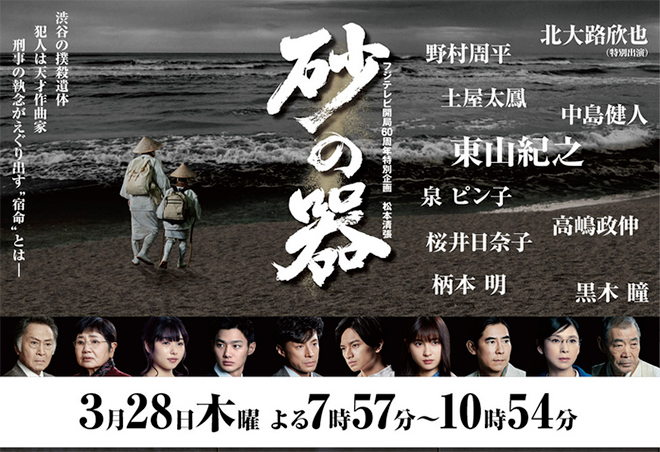 Date: From 7.57 p.m., 28 March 2019
Scriptwriter: Komine Hiroyuki (Suits, Himomen, Kaseifu no Mitazono Series)
Original Work: Suna no Utsuwa by Matsumoto Seichou
Cast: Higashiyama Noriyuki, Nakajima Kento, Tsuchiya Tao, Nomura Shuhei, Sakurai Hinako, Sugimoto Tetta, Izumi Pinko, Kitaoji Kinya (guest star), Takashima Masanobu, Kuroki Hitomi, Emoto Akira
Synopsis: During Halloween in October 2018, the streets of Shibuya in Tokyo are full of young people in masquerade. A middle-aged man is found dead in a place behind the subway station where no one will notice. An investigation task force is set up in Shibuya Nishi Police Precinct with detective Imanishi Eitaro (Higashiyama Noriyuki) also part of the team. The face and palms of the dead man have been smashed, and he remains unidentified. The police manage to obtain an eyewitness account from a youth in a bloodstained white shirt near the crime scene. However, is the youth the murderer or simply someone in masquerade? In addition, there is an eyewitness report of two men on a deserted street leading to the crime scene. One of them is presumed to be the victim while other young man is seen as a likely suspect but he cannot be clearly identified because it was dark. However, according to the eyewitness, the victim spoke with an accent from the Tohoku region and it is revealed that he said “Kameda hasn’t changed one bit” during the conversation. Imanishi teams up with the young detective Yoshimura Hiroshi (Nomura Shuhei) and they head to the vicinity of the crime scene to investigate. But they are unable to obtain clues on “Kameda”. Meanwhile, the talented composer Waga Eiryo (Nakajima Kento) who has started gaining public attention, announced his first concert after his return to Japan and performs a new piece titled Destiny. He refuses to talk about his past and private life even when he gives interviews. Waga was the culprit in the case that took place in Shibuya last night. He tells himself that his plan was perfect and has a good time with his fiancee Tadokoro Sachiko (Sakurai Hinako) and her father Shigeki (Kitaoji Kinya) who is currently a minister. On the night of the murder, Waga had actually visited his lover Naruse Rieko (Tsuchiya Tao) who lives in an apartment near the crime scene, and she had given him shelter. Just as the investigation looks like it will hit a dead end, Imanishi finds the fixation on Tohoku odd and visits a linguistic scholar to ask about dialects. That is how he learns that a part of the Izumo region has an accent that is similar to Tohoku too. Furthermore, it also has a place with the name Kamedake. Imanishi achieves a breakthrough after Shimane Prefectural Police identify the victim as a missing man called Miki Kenichi (Takashima Masanobu). He and Yoshimura go around the crime scene asking about Miki. Miki worked at an orphanage and volunteered in various activities. All the people who knew Miki told them that he was like Buddha and not a single person hated him. Why was such a good man killed? The investigation stalls yet again. However, Imanishi discovers a newspaper column written about a woman who scattered confetti from a train window, and he instinctively feels that this could be the criminal’s shirt. He hunts for the place where this confetti was scattered and finds scraps of it. It is soon established that the fabric has blood stains and the blood matches that of the victim’s. The woman is a bartender in Ginza and Waga’s lover Rieko. Waga learns that the police is closing in and grows desperate as he focuses on completing his new piece like a man possessed. Imanishi continues to trace Miki’s movements and discovers a connection between Waga and Miki. Then he stumbles upon the existence of Waga’s father Motoura Chiyokichi (Emoto Akira) … …
Official Website: www.fujitv.co.jp/sunano_utsuwa
Preview: Suna no Utsuwa CM