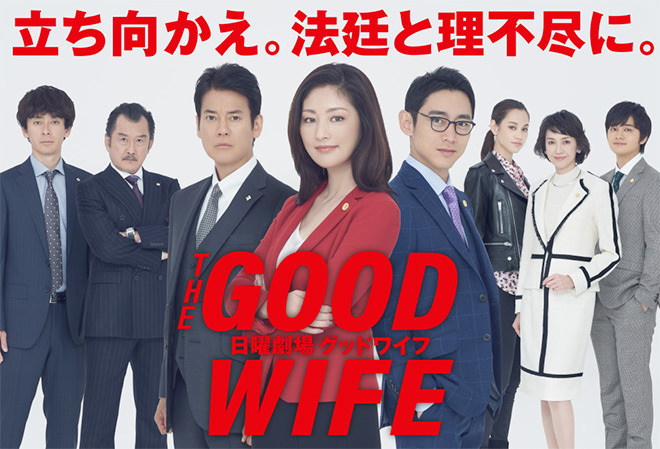 Story
Hasumi Kyoko was once an outstanding young lawyer but she resigned after having her first child. She lives happily with her husband Soichiro, who heads the Special Investigation Department of the Tokyo District Public Prosecutors Office, and their two children as a full-time housewife. However, this happiness crumbles in an instant one day when Soichiro is suddenly arrested on suspicion of corruption, and a sex scandal with a news journalist Toyama Aki also comes to light. The legal community is rocked by this huge scandal which gets extensive media coverage. At a press conference, Soichiro denies corruption but admits to his relationship with the journalist and offers an apology. However, he is arrested. Although Kyoko is devastated by her husband’s betrayal, she decides to make a comeback as a lawyer for the sake of her family. Tada Masahiro, who jointly runs the law firm, Kamiyama-Tada, gives her a helping hand. Masahiro did a legal apprenticeship at the same time as Kyoko and liked her in the past. However, setting those feelings aside, he has a high regard for her ability as a lawyer and convinces his partner Kamiyama Yoshie who opposes hiring Kyoko. With his help, Kyoko is hired on probation and given six months to compete with the young lawyer Asahi Kotaro for that one official position. She has to contend not only with public scrutiny as the betrayed wife, but also a 16-year void as a lawyer and fight against the odds every day. Nevertheless, she holds strong convictions and even turns her own weaknesses to her advantage and thrives.

Characters
Tokiwa Takako as Hasumi Kyoko
A lawyer who has been hired on probation at the law firm, Kamiyama-Tada. She has returned to the profession after being a housewife for 16 years due to a scandal involving her husband Soichiro. She is conscientious, cheerful and sociable. Because she is a perfectionist, she has difficulty relying on people and often ends up handling things all by herself. She passed the bar exam and graduated at the top of her cohort during her time in legal apprentice. She was a highly regarded young lawyer at the time she met Soichiro and got married. She became a full-time housewife also because their son Hayato is sickly. Her happiness crumbles after her husband’s scandal is exposed. She makes the decision to make a comeback as a lawyer for the legal fees and to protect their son and daughter. However, she stopped practicing law for too long and has difficulty finding employment. Then Tada Masahiro invites her to join his law firm, Kamiyama-Tada, and she goes to work for him. This is the beginning of her great battle as a wife, mother, lawyer and woman.

Koizumi Kotaro as Tada Masahiro
A partner of the law firm, Kamiyama-Tada. He has a sharp mind and is dependable. He is liked by females for his handsome looks and sincerity, and his clients have strong faith in him. However, he is unable to show his weakness(es) and does not have a true friend or a true girlfriend. He met Hasumi Kyoko back when they were legal apprentices and he was drawn to her beauty and personality. However, he kept his feelings to himself, deciding to tell the high-achieving Kyoko after he became a man who could measure up to her. When he was gaining attention in legal circles as an up-and-coming young lawyer, he heard talk of Kyoko’s marriage and felt depressed. After she got married, he threw himself into his work more than ever. Time passed and when he learns about the scandal involving Kyoko’s husband Soichiro. He meets her again after more than 10 years and invites her to his firm … …

Mizuhara Kiko as Madoka Michiru
A paralegal at the law firm, Kamiyama-Tada. She uses her wide circle of friends and will do whatever it takes to obtain crucial evidence in order to win lawsuits. Well-versed in all sorts of things, she is like a right-hand woman to the lawyers. Her performance has earned the confidence of both Tada Masahiro and Kamiyama Yoshie. Her private life is shrouded in mystery. No one even knows where she lives. The only thing they know is that she was a public prosecutor’s administrative officer in her last position. According to Hasumi Soichiro, she left the job.

Kitamura Takumi as Asahi Kotaro
A young lawyer who was hired on probation at the law firm, Kamiyama-Tada. The diligent and knowledgeable type, he did well in law school. He speaks freely to his superiors without fear. Because of that, he can be seen as impertinent. But his personality is like that of a young pup that effortlessly gets into the hearts of people. Even in office, Tada Masahiro and Kamiyama Yoshie are partial to him. He is handsome and should be popular, but his favourite Madoka Michiru snubs him. However, he is not discourage.

Takito Kenichi as Sasaki Tatsuya
A member of the Special Investigation Department of the Tokyo District Public Prosecutors Office. He has been under Hasumi Soichiro for eight terms. Because he stands out among his peers, even Soichiro favours him as a future candidate to be a top official of the Public Prosecutors Office. He has been a confidant of Soichiro who drilled into him the fundamentals of a public prosecutor since his earlier years. He gets his sense of justice from Soichiro, especially his lofty ideals. He takes pride in the fact that prosecutors uphold the country’s justice. He is put in charge of interrogating Soichiro after his arrest, and drives him into a corner with Wakisaka Hiromichi.

Hakata Hanamaru as Hayashi Mikio
Hasumi Soichiro’s personal attorney. He is a serious and reliable person. An acquaintance referred him to be the lawyer to clear Soichiro’s name. He is amiable and has a gentle air about him. But there are times when a sharpness in his gaze gives a hint of his brilliance. He has familiarised himself with Soichiro’s relationship with Wakisaka Hiromichi who replaced him as the new head of the Special Investigation Department, and the situation. He tries to determine the interpersonal relationships in the Tokyo District Public Prosecutors Office as well as the people who are his allies and enemies.

Kaku Chikako as Kamiyama Yoshie
A partner of the law firm, Kamiyama-Tada. She made a name for herself as an ace lawyer in a major law firm and takes pride in the fact that she competed shoulder to shoulder in an industry dominated by men. She is a very proud and dynamic woman who believes that she is a good judge of character. She has tremendous confidence in Tada Masahiro as a partner. She has no personal life, having given her life to work. She is skeptical of Hasumi Kyoko who returns to law practice after being a full-time housewife for 16 years.

Yoshida Kotaro as Wakisaka Hiromichi
The new head of the Tokyo District Public Prosecutors Office’s Special Investigation Department. He is an excellent prosecutor but with two terms under Hasumi Soichiro, who is a more outstanding prosecutor than him, his path to becoming the attorney general was considered to be tough. Soichiro was eventually appointed to head the Special Investigation Department which is considered to be the position of the next attorney general, while he was transferred to the Yokohama District Public Prosecutors Office. He regards Soichiro as a thorn in his side and wishes for his downfall. He takes Soichiro’s place after his arrest, and blocks his way in order to grab the second chance that he has been given.

Karasawa Toshiaki as Hasumi Soichiro
Hasumi Kyoko’s husband. The former head of the Tokyo District Public Prosecutors Office’s Special Investigation Department who is now in police custody for allegedly accepting bribes. A high achiever since he was a student, he has the qualities of a leader and cares for his junior colleagues. He is assertive and never daunted no matter who his opponent is. Although he has no tolerance for wrongdoings and crimes, he occasionally uses aggressive methods to fight it out. He gets to know a female journalist Toyama Aki while investigating a case and builds rapport by supplying information. One day, he gets drunk and spends the night with her. The mass media runs a story about the corruption allegation and his affair, and he is forced out of his post. At a press conference after news of the scandal leaked, he vehemently denies the allegation of corruption but acknowledges the affair with the journalist and loses his wife’s trust.

This blog contains information and musings on current and upcoming Japanese dramas but is not intended to be comprehensive.
View all posts by jadefrost →
This entry was posted in TBS/MBS, Winter 2019 Dramas and tagged Aibu Saki, Karasawa Toshiaki, Koizumi Kotaro, Takito Kenichi, The Good Wife, Tokiwa Takako, Yoshida Kotaro. Bookmark the permalink.