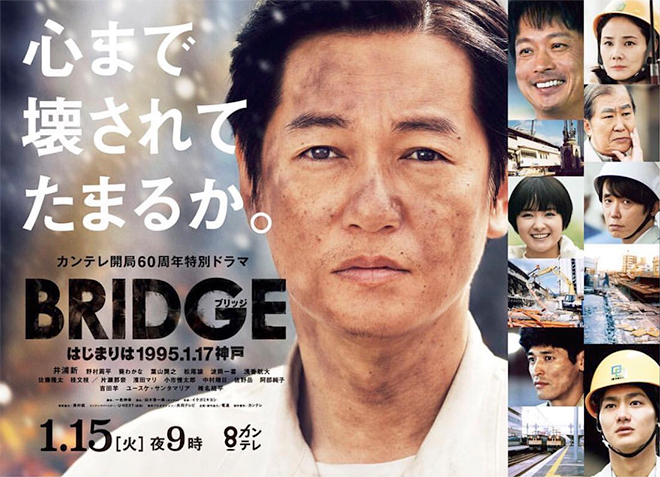 Date: From 9.00 p.m., 15 January 2019
Scriptwriter: Isshiki Nobuyuki (Haitatsusaretai Watashitachi, Otona no Natsuyasumi)
Cast: Iura Arata, Nomura Shuhei, Aoi Wakana, Hayama Shono, Matsuo Satoru, Namioka Kazuki, Asaka Kodai, Sato Ryuta, Katsura Bunshi, Katase Nana, Hamada Mari, Koichi Mantaro, Nakamura Yasuhi, Sano Gaku, Abe Junko, Yoshida Yo, Santamaria Yusuke, Shiina Kippei
Synopsis: On 17 January 1995, the Great Hanshin-Awaji Earthquake struck, destroying the city of Kobe in an instant and claiming more than 6,000 lives. JR Rokkomichi station, which was a key point that connected east and west, collapsed. No goods could be transported under such circumstances. Even a commute to Osaka had to be by foot. The people of Rokkomichi were devastated. Then one man appeared. Takakura Akira (Iura Arata) was the construction manager of Iwamakigumi, a construction company responsible for restoring JR Rokkomichi station. Kobe lost everything in comparison to Osaka a short distance away, which still went about its day as usual. Takakura reached a decision. Restoration work on such a scale would ordinarily take two to three years. However, his men used an unusual construction method called jack-up under instructions from the railway company JR. Although the pillars crumbled, the frame of the elevated tracks was sturdy. This section would be jacked up and secured. It was difficult and high risk work but would be able to greatly shorten the construction time. Takakura happened to meet a youth Kasuga Yutaka (Nomura Shohei) who grew up in Rokkomichi. Kasuga was appointed to take notes on the work. He began to film people battling with difficulty with his video camera. The restoration work was eventually accomplished in a mere 74 days amid harsh conditions. However, his secret was hidden in this video camera. In the autumn of 2018, a mysterious man (Shiina Kippei) appears in front of youths who are drawing graffiti on a monument in Kobe to the victims of the Great Hanshin-Awaji Earthquake. He is Kasuga 23 years later. He starts to tell them the feelings he had kept to himself.
Official Website: www.ktv.jp/bridge

This blog contains information and musings on current and upcoming Japanese dramas but is not intended to be comprehensive.
View all posts by jadefrost →
This entry was posted in Fuji TV, Winter 2019 Drama Specials and tagged Aoi Wakana, Bridge, Iura Arata, Nomura Shuhei, Santamaria Yusuke, Shiina Kippei, Yoshida Yo. Bookmark the permalink.