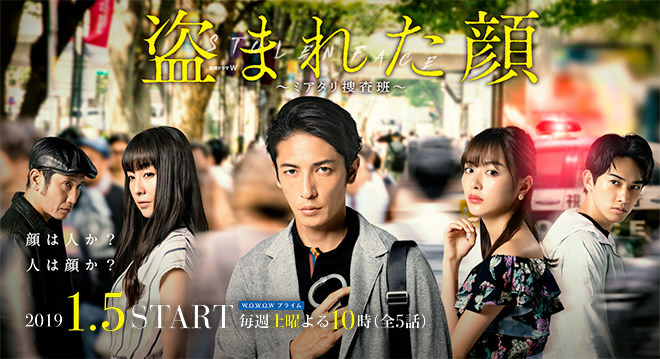 Story
Shirato Takamasa is an investigator who works for the Tokyo Metropolitan Police’s Criminal Investigation Liaison Division. He memorises the faces of wanted persons and only relies on this to spot them in crowds. Shirato watches crowds come and go in busy shopping districts everyday with his subordinates Ando Kanae and Tani Ryohei, in search of these fugitives with his outstanding memory and ability to distinguish features. One day, he sees an unlikely face in the crowd. It is that of Sunami Toru, a senior detective who was supposed to have died mysteriously four years ago. He was an outstanding detective as a investigator and a man whom Shirato admired. Just when Shirato is about to dismiss this as an illusion, he hears baffling rumours about Sunami. As Shirato investigates the case, both the Public Security Division and the Chinese mafia get into action and his life gets targeted before he realises it. In addition, his girlfriend Chiharu’s baffling behaviour starts to raise his suspicions … …

Characters
Tamaki Hiroshi as Shirato Takamasa
A veteran investigator of five years who has committed the faces of 3,000 people to memory. He is a leader who cares for his subordinates. However, watching thousands of faces on the streets every day wears him out. His father, who died alone, casts a shadow on him.

Shibukawa Kiyohiko as Sunami Toru
A capable investigator who was Shirato Takamasa’s senior. However, he brutally killed the Chinese mafia one after another four years ago. He was later murdered in what was considered revenge.

Uchida Rio as Ando Kanae
A new investigator whom Shirato Takamasa selected from the uniform police because of her outstanding ability to to distinguish features. She quickly produces results after joining the Criminal Investigation Liaison Division. She is good in judo and is the life of the team.

Machida Keita as Tani Ryohei
Shirato Takamasa’s subordinate. A mid-level investigator with the Criminal Investigation Liaison Division. He is honest and admires Shirato. As Ando Kanae starts to produce results, he feels vexed that he cannot perform because he is in a slump.

Maruyama Tomomi as Kawamoto
An officer of the Public Security Department’s Second Foreign Affairs Division at the Tokyo Metropolitan Police. He secretly met a Chinese mafia boss called Zhang repeatedly, and has been carrying out murky deals. He had been in contact with a wanted Chinese fugitive just before Shirato Takamasa arrested the man.

Wada Soko as Koike
An officer of the Tokyo Metropolitan Police’s Personnel Divison. He shares investigation information with Shirato Takamasa who joined the police force at the same time as him. He cautions Shirato not to get too deeply involved in Sunami Toru’s case.

Ito Ayumi as Chiharu
Shirato Takamasa’s girlfriend. A nursing care helping. They met through a dating website and are now living together. However, there is something baffling about her behaviour and he cannot grasp her true feelings.

This blog contains information and musings on current and upcoming Japanese dramas but is not intended to be comprehensive.
View all posts by jadefrost →
This entry was posted in Winter 2019 Dramas, WOWOW and tagged Ito Ayumi, Nusumareta Kao, Tamaki Hiroshi. Bookmark the permalink.