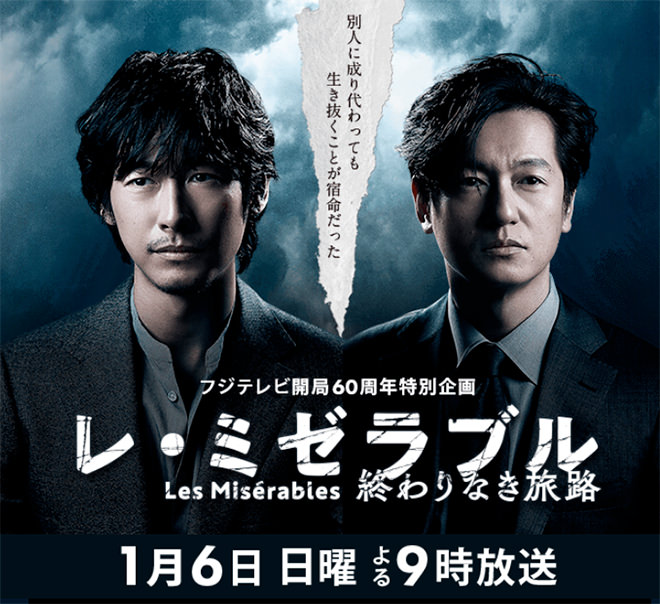 Date: From 9.00 p.m., 6 January 2019
Scriptwriter: Hamada Shuya (Zettai Reido Series, Yake ni Ben no Tatsu Bengoshi ga Gakkou de Hoeru, Naomi to Kanako)
Original Work: Les Miserables by Victor Hugo
Cast: Dean Fujioka, Iura Arata, Yamamoto Mizuki, Yoshizawa Ryo, Murakami Nijiro, Kiyohara Kaya, Matsushita Kohei, Shimizu Hiroya, Fukuda Mayuko, Hasegawa Kyoko, Kaneko Nobuaki, Tomita Yasuko, Terawaki Yasufumi, Ibu Masato, Katase Rino, Karina, Okuda Eiji
Synopsis: One day in Kobe in the 1990s, news of the escape of a juvenile murderer from prison spreads around. Two years earlier, 17-year-old Baba Jun (Yoshizawa Ryo) got into a scuffle with Saito Futoshi (Terawaki Yasufumi), a self-serving man who had cheated his mother Yuko (Tomita Yasuko) of all her money, and killed Saito in self-defence. A high school drop-out, Jun worked hard at part-time jobs to earn money for surgery for his younger brother who suffered from biliary atresia. But he was slapped with criminal charges and thrown into a juvenile corrective institution. One day, Jun hears that his younger brother is in critical condition and breaks out. However, his brother is already dead. A despondent Jun tries to commit suicide but is saved by Tokuda Hiroaki (Okuda Eiji) who runs a self-support facility. He hides his identity and begins to live at the place. This is where he meets a youth Watanabe Takumi (Murakami Nijiro) who aspires to be a lawyer. There is another boy Saito Ryosuke, who is the only son of the man that Jun killed. Ryosuke had cut ties with his unscrupulous parents. But when it became known to the world that his father was killed for committing investment fraud, he was harassed by the media as if he was the assailant’s family even though he was supposed to be the victim’s family. Then the Great Hanshin-Awaji Earthquake hit in 1995. This unprecedented natural disaster significantly changes the lives of the two boys. Some 10 years later, Jun (Dean Fujioka) has assumed Takumi’s identity. He opens a small lawyer’s office in a corner of Shinjuku in Tokyo and takes cases to defend the socially vulnerable. He also rehabilitates delinquent youth and provides free consultation to poor people. Ryosuke (Iura Arata) has become a detective with the Shinjuku Police Precinct’s Community Safety Division. He is in charge of many delinquent youth cases and is enforces strict control over them. One day, Ryosuke meets Takumi while cracking down on a brawl. The two men eventually develop a relationship of trust. However, Ryosuke finds out that this Takumi is his father’s murderer … …
Official Website: www.fujitv.co.jp/lesmiserables