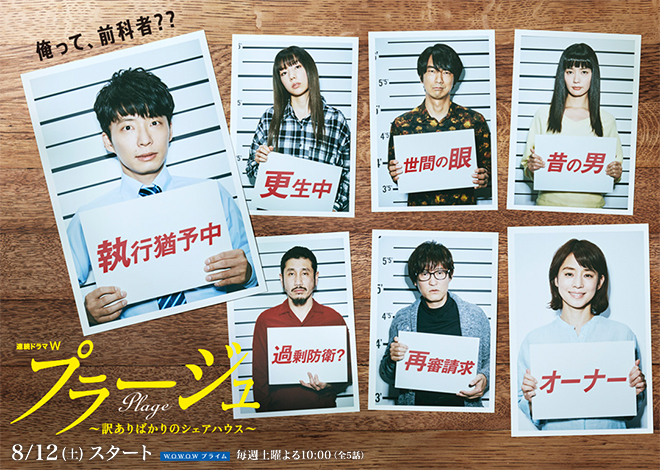 Story
32-year-old Yoshimura Takao is a boring salesman who has had a string of failures in his work at a travel agency and to make things worse, he is snubbed by the woman he likes. Then he ends up getting arrested for using stimulants which he did not really know he was taking to forget his troubles and given a suspended sentence. Takao is naturally dismissed by his company. On top of all that, the apartment he is living in goes up in flames … … “There’s nowhere else to go if it doesn’t work out here,” Takao is told before he is taken to a shared house which has a cafe called Plage on the first floor. It is owned by Asada Junko. The basic rent is 50,000 yen, a rotating schedule for cleaning, and only a curtain as partition for individual rooms but comes with delicious food. Takao begins to live with a light heart until his next job is decided. But he gets involved in all sorts of commotion caused by the flawed residents, Koike Miwa, Noguchi Akira, Yabe Shiori, Nakahara Michihiko and Kato Tomoki.

Characters
Hoshino Gen as Yoshimura Takao
An employee of a travel agency who unexpectedly becomes an ex-convict. He loses his girlfriend, job and home, and comes to Plage.

Naka Riisa as Koike Miwa
She is emotionally and physically hurt, and is not good at expressing her feelings. However, she gradually starts to open up to Yoshimura Takao. She goes to the house of a volunteer probation officer and helps with the housework.

Mashima Hidekazu as Noguchi Akira
He is the type who observes people’s words and actions and does not talk much about himself. His occupation is not known. He appears amiable but a part of him is shrouded in mystery.

Nakamura Yuri as Yabe Shiori
In the day, she works at a lunch box shop run by a kind couple and at night, she sometimes cheerfully helps at a bar too. She is like a big sister and has a cheerful personality but cannot run away from an ex-boyfriend she dated in the past.

Shibukawa Kiyohiko as Nakahara Michihiko
He gave up his dream of being a designer and works at a secondhand clothing store. He is the life of Plage and treats Yoshimura Takao like a younger brother. Some incident in the past led to the break up with his girlfriend but … …

Suga Shikao as Kato Tomoki
He had served almost five years in prison for some case but was released and there is a retrial now. Although he is taciturn, he has an interest in music and often plays the guitar in the cafe.

Ishida Yuriko as Asada Junko
The owner of Plage which has a cafe on the first floor and shared house on the second floor. There is a reason why she serves delicious meals every day and watches over the people who live there … …

This blog contains information and musings on current and upcoming Japanese dramas but is not intended to be comprehensive.
View all posts by jadefrost →
This entry was posted in Summer 2017 Dramas, WOWOW and tagged Hoshino Gen, Ishida Yuriko, Mashima Hidekazu, Naka Riisa, Plage. Bookmark the permalink.