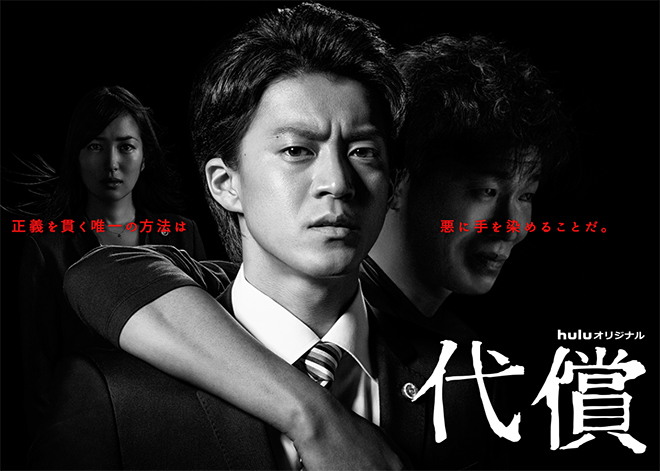 Broadcast
From 18 November 2016 (updated on Fridays)

Story
Okuyama Keisuke is a successful lawyer with a dark past. He suffers from severe obsessive-compulsive disorder as a result of abuse and betrayal when he was a young boy. One day, Keisuke receives a letter asking to defend his distant relative and psychopath “friend”, Ando Tatsuya, who is a suspect in a robbery and murder case. The sender is Tatsuya’s step mother Michiko. Keisuke is overcome by severe nausea and memories of a ghastly past. Tatsuya is the one who had robbed Keisuke of his own parents and happiness one after another by using all sorts of despicable methods. After that, Keisuke was repeatedly mistreated by Tatsuya’s family who adopted him. Keisuke decides to take a risky gamble to bury Tatsuya from society in order to protect his colleague Shiraishi Makoto whom he is dating. His reunion with Tatsuya is the start of a battle with a new nightmare. As he pretends to search for material to absolve Tatsuya, he ponders whether there is a way to prove Tatsuya’s crime. But Tatsuya is very popular and everyone is unanimous in insisting on his innocence. What is Tatsuya’s objective? And what fate awaits Keisuke?

Characters
Oguri Shun as Okuyama Keisuke
A competent lawyer with the law firm, Shiraishi, and a man with a promising future. He is remarkable for having won acquittals in the cases of false charges that he had been in charge of and is close to marrying Makoto, the daughter of Shiraishi Shinjiro, the head of his law firm. However, he has a secret that he cannot tell anyone. As a child, his parents and the people important to him were killed by Ando Tatsuya, a relative of the same age as him and he was repeatedly abused at Tatsuya’s home. He suffers from severe obsessive-compulsive disorder. Then one day, he receives a request to take a case. And that request is from none other than the very person who once knocked him down to the very bottom … …

Takahashi Tsutomu as Ando Tatsuya
A suspect in a robbery and murder case in which life imprisonment has been sought. He is an affable young man liked by everyone. But in truth he is a genius at manipulating other people and instigating crime without getting his own hands dirty. He has been skillfully manipulating the people around him since he was a child and killed the people important to Okuyama Keisuke one after another. He has an unusual attachment to Keisuke and there are glimpses of some onother motive for asking Keisuke to take his case.

Takanashi Rin as Shiraishi Makoto
A lawyer with the law firm, Shiraishi. Okuyama Keisuke’s fiancee. Her mother passed away when she was a child and she was raised by her father Shiraishi Shinjiro. She is a hardworking person and is passionate about her work. She feels a sense of uncertainty about Keisuke’s queer behaviour towards Ando Tatsuya and starts to probe into his past. However, Tatsuya even starts trying to put out feelers to her … …

Fuchikami Yasushi as Morota Hisato
A journalist pursuing Ando Tatsuya. He was Okuyama Keisuke’s friend in junior high school and has been very familiar with Tatsuya’s true character since that time. As he continues to gather materials in an attempt to bring Tatsuya’s real nature to light, he learns that Keisuke has taken Tatsuya’s case and they are reunited after 17 years.

Yanagi Erisa as Tsukuda Sayumi
A part-time worker who goes in and out of the house of Ando Tatsuya and Michiko. He gave a statement that he had a secret meeting with Tatsuya on the night of the robbery and murder. In fact, he is saddled with a “tragic past” that he still cannot get rid of his bitter animosity.

Yanagi Shuntaro as Taguchi Masato
Ando Tatsuya’s friend who he treats as younger brother. He takes part in various crimes as told by Tatsuya and his step mother Michiko.

Kataoka Reiko as Ando Michiko
Ando Tatsuya’s step mother. She is greedy for money and also flashy in her relationship with men. She made use of Tatsuya, her husband’s child by a former marriage, and extorted money from relatives. She is truly a bad person. After she adopted Okuyama Keisuke who had lost both his parents, she ill treated him. She is in cahoots with Tatsuya with whom she has a close relationship, and is still involved in various crimes.

Hirata Mitsuru as Yoshida Hajime
A doctor of psychosomatic medicine with Yoshida Clinic. He is like a father figure to Okuyama Keisuke and a person whom he can trust. He quietly watches over Keisuke who suffers silently from severe obsessive-compulsive disorder because of Ando Tatsuya and continues to support him. He and Shiraishi Shinjiro are old acquaintances.

Ishibashi Ryo as Shiraishi Shinjiro
The head of the law firm, Shiraishi. He believes that fulfilling the wish of the defendant is the true meaning of a lawyer. He has a high regard for Okuyama Keisuke skills as a lawyer. But on the other hand, he does not know what Keisuke is thinking sometimes and has misgivings.

Horibe Keisuke as Moteki Kazuyuki
A prosecutor of the Tokyo District Public Prosecutors Office. He is in charge of the public trial of Ando Tatsuya who was arrested as a suspect in a robbery and murder. He is a shrewd prosecutor and slowly but steadily starts to corner Okuyama Keisuke who has become Tatsuya’s lawyer.

This blog contains information and musings on current and upcoming Japanese dramas but is not intended to be comprehensive.
View all posts by jadefrost →
This entry was posted in Fall 2016 Dramas, Hulu and tagged Daishou, Ishibashi Ryo, Oguri Shun, Takahashi Tsutomu. Bookmark the permalink.