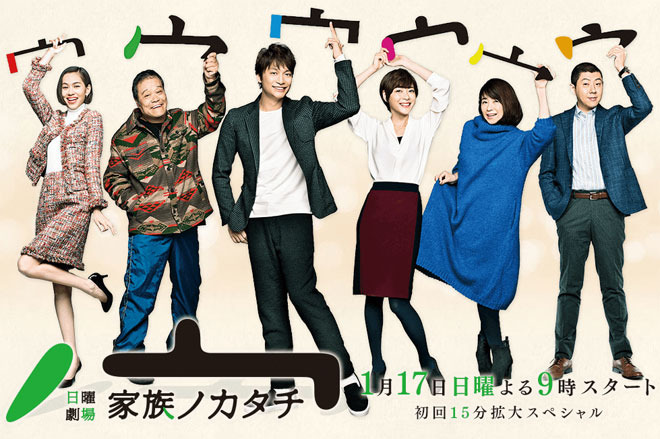 Story
39-year-old bachelor Nagasato Daisuke works for a stationery manufacturer. Although he is attuned to trends and interacts with other people flawlessly, he hates being hurt by love and enjoys living alone. This is a day that Daisuke has been eagerly awaiting. He has finally purchased his long-awaited apartment after many years of hard work. While his belongings are being transported, a woman’s girdle falls from the sky. When Daisuke looks up, he sees a lady peering down from a fifth floor verandah. He immediately takes it to her apartment, but the girdle is roughly snatched away and the door shut in his face. This is the encounter between Daisuke and 32-year-old divorcee Kumagai. “What’s with that girdle woman …” Daisuke mutters. Hanako is an office lady who works for a trading company and has the clear intention not to remarry. The next morning, someone calls Daisuke’s workplace with a complaint about a product he is in charge of. The female caller “Complainer Hanako” is even famous within the company. Daisuke who has received several email complaints that start with the line “Allow me to say a few words …” in the past, wearily handles the call, but she has already disconnected. When work ends, he declines a drinking session with colleagues again and silently trains alone at the gym. On the way home, he drinks his favourite beer at a beer bar and has a blissful moment that no one can disturb. However, it is short-lived. When Daisuke returns to his apartment building, the surroundings have been sealed off by fire trucks and a crowd of onlookers is abuzz. He discovers the girdle woman in the crowd. Hanako worries that it might be her apartment and Daisuke lectures her self-righteously. But the cause of the fire is actually unit 407 where he lives. The culprit who emerges from the circle of firemen is his dad?! Yozo, whom Daisuke has not seen in the past five years, suddenly came to Tokyo from the countryside, borrowed the keys from the caretaker and entered his apartment without asking. He had been enjoying himself smoking food in the verandah, but it was mistaken for a fire. On top of that, Yozo remarried a woman almost 30 years his junior without Daisuke’s knowledge. His wife Megumi seems to have run away after that and he brought his new 13-year-old stepson Kota here to stay … … Meanwhile Hanako’s mother Ritsuko makes the decision to live separately from her husband and comes to stay with her beloved daughter without consulting her. Daisuke and Hanako’s lives as swinging singles get disrupted because of parents who have no hesitation about enjoying their own lives.

Characters
Katori Shingo as Nagasato Daisuke
He works for ‘Penna’, a large stationery manufacturer and has now been put in charge of the Product Development Department’s Product Planning Unit. He is a precise person. Besides going to the gym six times a week, he makes an effort to check out books and movies that are hot topics and loves improving himself. In his 20s, he once considered marriage, but broke up with his girlfriend because he could not take that step. He has not thought about getting married since then. He does not find it an inconvenience to live alone and has no complaints. He instead believes it is a risk to welcome other people into his own living space and has no intention of closing the gap between other people more than necessary. By the time he realises it, he is without a girlfriend and still counting.

Ueno Juri as Kumagai Hanako
She works for the Beverage Ingredients Department’s Coffee Division of a general trading company, Teiko Trading. Although she is a capable office lady who is proficient in languages, she has a tendency of unintentionally pointing out other people’s shortcomings and bad habits. She has a routine of sending complaint e-mails about the shops and personal belongings that she regularly uses. She got married in her 20s but divorced in less than a year. She is called “woman not suited for marriage” by her colleagues. As her work obligations increase, she prepares herself to live alone despite a touch of uncertainty about the future.

Mizuhara Kiko as Tanaka Rina
A new employee at the general trading company where Kumagai Hanako works. In fact, she is a wealthy girl who got into the company using connections and has no passion and ambition in her work. Because she lived abroad during her childhood and returned to Japan, it bothers her that she is treated like she is strange at times. She is frank in her opinions about Hanako. She meets Nagasato Daisuke through Hanako and gradually starts to get attracted to him.

Tanaka Kei as Takase Kazuya
Kumagai Hanako’s ex-husband. He had continued working overseas since their divorce, but comes back to Japan after a long time.

Mizuki Arisa as Ono Mika
Nagasato Daisuke’s ex-girlfriend. They started dating during university days and even considered getting married at one point. But Daisuke decided that he liked being single too much and was not suited for marriage. They broke up after seven years of dating. After that, she got married to another man who is unappealing according to Daisuke, and now lives happily as a family of four with two sons.

Mizuno Miki as Nagasato Megumi
Nagasato Yozo’s second wife and Kota’s mother. While she is having difficulties in romance and work after breaking up with Kota’s father, she meets Yozo and they get married. However, she ends up disappearing from them.

Nishida Toshiyuki as Nagasato Yozo
Nagasato Daisuke’s father. A former fisherman. Although he had a taciturn and strait-laced character, he seems a changed man after the death of his wife and lives with abandon. One day, he remarried Megumi who has a son without even consulting with Daisuke. However, she ran away and he takes his new stepson Kota to Tokyo. They move into Daisuke’s apartment and start living under the same roof until he finds Megumi.

Fubuki Jun as Kumagai Ritsuko
Kumagai Hanako’s mother. She started to live in the countryside after her husband retired. This was their long-awaited dream, but she could not tolerate the coldness and drudgery of life. She made the decision to live apart from her husband without even discussing with Hanako and came back to Tokyo. Even though she is welcoming her 60th birthday, she thinks life is ahead of her, and ends up having confrontations with her daughter at every turn. But in truth, she is worried about Hanako’s future.

Episodes
#1: Son and Daughter who won’t Marry vs Extraordinary Father and Mother
#2: Ex-husband’s a Stalker? Crisis Closes in on My Castle
#3: Last Present from Late Mother to Father and Son
#4: Ex-husband who Wants to Remarry and Bizarre Triangular Relationship Breaks Out
#5: Divorce on Night Before Wedding Ceremony? Conjugal Bond that Connects Mother and Father
#6: You Too Dad? Second Wife is a Marriage Swindler!?
#7: Real Reason Why Dad Remarried a Hopeless Woman
#8: Reason Why Dad’s Dying
#9: Reason I Want to be Together with that Fellow
#10: The Proposal I Told Dad

This blog contains information and musings on current and upcoming Japanese dramas but is not intended to be comprehensive.
View all posts by jadefrost →
This entry was posted in TBS/MBS, Winter 2016 Dramas and tagged Fubuki Jun, Katori Shingo, Kazoku no Katachi, Mizuki Arisa, Mizuno Miki, Nishida Toshiyuki, Tanaka Kei, Ueno Juri. Bookmark the permalink.

7 Responses to Kazoku no Katachi