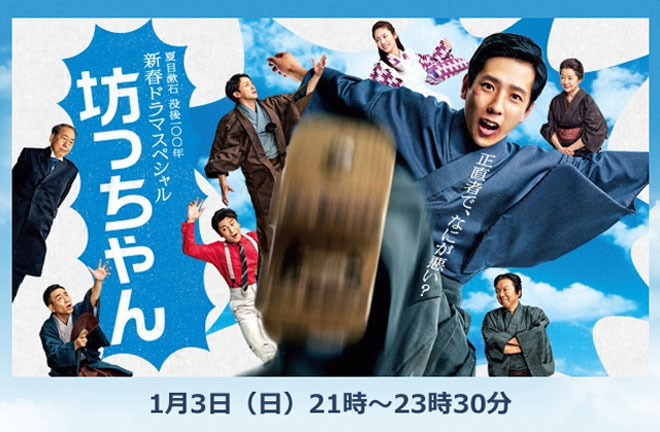 Date: From 9.00 p.m., 3 January 2016
Scriptwriter: Hashibe Atsuko (Ghost Writer, Boku no Ita Jikan, Osozaki no Himawari)
Original Work: Bocchan by Natsume Soseki
Cast: Ninomiya Kazunari, Matsushita Nao, Furuta Arata, Yashima Norito, Yamamoto Koji, Oikawa Mitsuhiro, Kishibe Ittoku, Miyamoto Nobuko, Matayoshi Naoki, Sato Koichi, Kobayashi Kaoru, Asano Yuko
Synopsis: Bocchan (Ninomiya Kazunari) inherited his parents’ reckless and very direct personalities. He has been causing problems since he was a child and is always treated like a troublemaker by the people around him. Only the family’s live-in maid Kiyo (Miyamoto Nobuko) praises him for his fine disposition and stands up for him in various ways. After graduating from physics school, Bocchan is recommended a teaching position at a junior high school in Matsuyama in Ehime Prefecture by his principal (Sato Koichi). Born and raised in Edo, Bocchan has never gone further than Kamakura, but he decides to take up the position because he has no particular job. Just after his arrival, he is told by the principal Tanuki (Kishibe Ittoku) to be a role model for the students and asks what this means. When the vice principal Red Shirt (Oikawa Mitsuhiro) tells him on behalf of the principal, Bocchan’s response of “I can’t”, dumbfounds the teachers. His colleague Yamaarashi (Furuta Arata), the maths teacher, calms things down and says he will take care of Bocchan’s lodgings. At a seat a distance away, the art teacher Nodaiko (Yashima Norito) is secretly talking to the vice principal for some reason. On the way to the lodgings, Bocchan hears that the English teacher Uranari (Yamamoto Koji) and the town’s beauty (Matsushita Nao) are secretly in love with each other. Furthermore, this female has designs on the vice principal. Bocchan thinks to himself that there is a lot in the countryside too as he arrives at the lodgings. His neighbour (Matayoshi Naoki) weighs on his mind. Then Bocchan finally starts to teach. However, he does not get along with the students. It quickly becomes well-known in the school that Bocchan eats two servings of dango at the dango shop and swims at the hot spring. He is mocked by the students, but that is not all. On his first night duty, they play a prank on him by putting grasshoppers in a mosquito net. He cross examines the culprits but none will admit to it and he decides that he has had enough of lies to people and to himself. Bocchan soon learns about Red Shirt’s despicable plan involving the parents (Kobayashi Kaoru, Asano Yuko) of the town’s beauty. Unable to forgive his dishonesty, Bocchan launches a swift and skillful rampage that starts to change the town and its people.
Official Website: www.fujitv.co.jp/bocchan