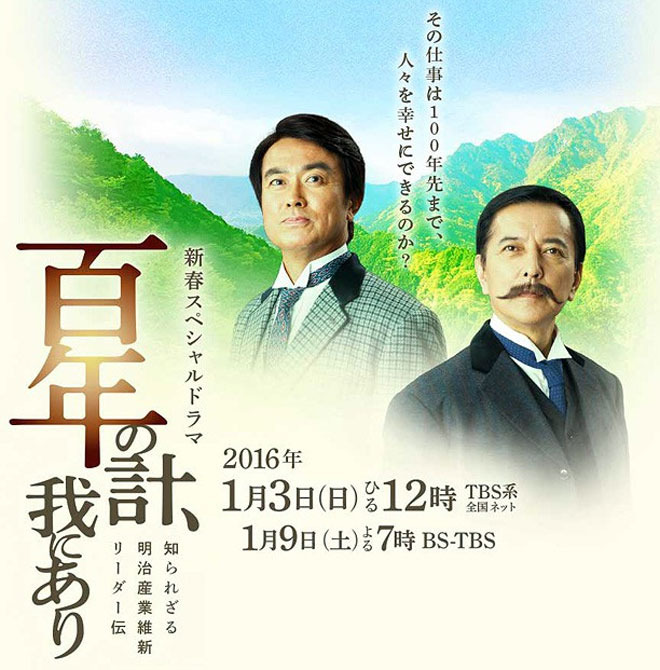 Date: From 12.00 p.m., 3 January 2016
Scriptwriters: Oikawa Mami (ST Aka to Shiro no Sousa File, Maruho no Onna, Piece), Takahashi Hideki
Cast: Enoki Takaaki, Ishiguro Ken, Asari Yosuke, Asaka Mayumi, Hiki Rie, Yamada Kinuo, Patrick Lample
Synopsis: Sumitomo’s first director general was Hirose Saihei (Enoki Takaaki) who grew up at the Besshi Copper Mine run by Sumitomo in Shiga Prefecture from young. He convinces the Sumitomo family to embark on modernising its mine for Japan’s sake 100 years into the future. Persistent and particular about modernisation at the hands of the Japanese, he was an active proponent of transferring Western technology. He made his subordinate Shiono Monnosuke (Asari Yosuke) study in France and learn mining technology. This is how the copper mine was rapidly modernised. But on the other hand, the smoke emissions from smelting mill caused environmental problems. It was Hirose’s nephew Iba Teigo (Ishiguro Ken) who volunteered to tackle this difficult situation. In order to solve the root of the problem, Iba proposed an incredible plan to move the modern smelting mill, which was completed less than 10 years ago, to another place just like the current. A furious Hirose was absolutely against this reckless plan. But Iba talked him into it and even carried out a huge reforestation plan to restore nature at the mountains of Besshi that had been devastated by mining and smelting that spanned 200 years. Iba would go on to become Sumitomo’s second director general. How far did the reforms of Hirose and Iba get?
Official Website: www.tbs.co.jp/hyakunen-kei

This blog contains information and musings on current and upcoming Japanese dramas but is not intended to be comprehensive.
View all posts by jadefrost →
This entry was posted in TBS/MBS, Winter 2016 Drama Specials and tagged Asari Yosuke, Enoki Takaaki, Hyakunen no Kei Watashi ni Ari, Ishiguro Ken. Bookmark the permalink.