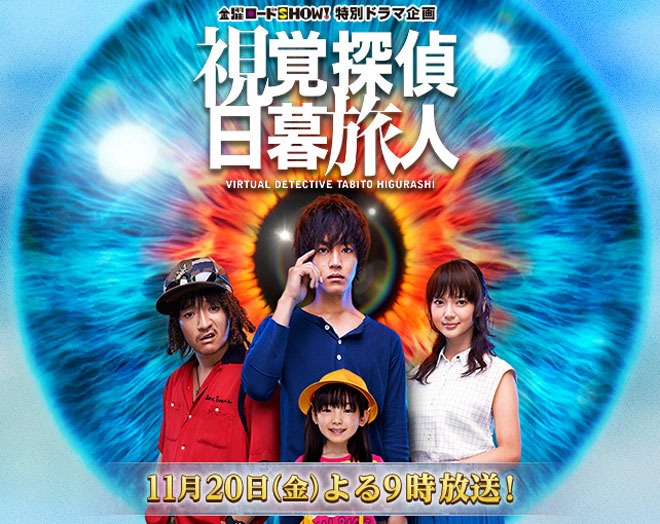 Date: From 9.00 p.m., 20 November 2015
Original Work: Tantei Higurashi Tabito no Sagashimono by Yamaguchi Kozaburo
Scriptwriter: Fukuhara Mitsunori (Ofukousan, Teen Court)
Cast: Matsuzaka Tori, Tabe Mikako, Hamada Gaku, Kinami Haruka, Sumida Moeno, Usuda Asami, Ochiai Motoki, Hashimoto Manami, Kinoshita Houka, Kuze Seika, Kikuchi Yukio, Ikushima Hiroshi, Nakano Hideo, Yamazaki Hajime, Kino Hana, Kitaoji Kinya
Synopsis: Higurashi Tabito (Matsuzaka Tori) is an investigator who lost four of his five senses due to a past incident and relies only on his sight to find things. He lives at his investigation agency together with his buddy and manager Yukiji Masahiko (Hamada Gaku) and his 6-year-old adopted daughter Momoshiro Tei (Sumida Moeno). Tabito is able to locate any item that a person is searching for. His investigation method is rather strange. It appears that his eyes can see things that are invisible to an ordinary person. Nursery school teacher Yamakawa Yoko (Tabe Mikako) takes care of her pupil Tei on a late shift but Tei’s parent does not come. She is overwhelmed by Tei who silently folds origami paper by herself and speaks like a grown-up. Tei eventually declares that she cannot wait and intends to go home on her own. Yoko panics and runs after her. In the process, she drops the charm of her treasured key holder that she wears on her waist. Tei is headed for a unit in a multi-tenant building in Kinshicho. When Yoko enters the room, a man is deep in sleep on a sofa. This man is Tabito. Tei tells her, “This is my father. Don’t wake him up.” She begins a microwaved meal as she listens to hard rock by herself. Hearing from Tei that she has no mother, Yoko is angered that Tabito leaves his daughter to her own devices and forces him to wake up. Tabito rouses, but cannot follow Yoko’s words as she rapidly talks on and on. However, he notices only the hook of the holder on her waist. The next day, Yoko is summoned by Tei and finds Tabito and Yukiji crouching down on the road. Tabito tells her that he will find the key holder immediately. She is taken aback. “How do you know that I’ve lost a key holder? Tabito explains that he can see “patterns of emotion”. When he does not answer Yoko’s questions and walks away quickly, she mutters whether he cannot hear her. Yukiji confirms that she is correct. Tabito is deaf. Yoko is told by Yukiji that Tabito does not even know the sense of smell, taste and touch. He senses everything with his eyes and sure enough Tabito locates Yoko’s keyholder charm in a park’s pond. However, Yukiji reminds Tabito to stop searching for things outside of work. Although Yoko does not believe in Tabito’s ability, she is concerned about Tei and Tabito. She barges into the office and meddles in their affairs, and witnesses his astonishing ability firsthand. However, Tabito collapses as a result of overusing his eyes. He is even warned by his physician Enoki Wataru (Kitaoji Kinya) not to use his eyes too much. Yukiji tells Yoko that Tabito used his eyes for her sake and asks her keep her distance. A crestfallen Yoko leaves the office. However, Tei later goes missing while out on an errand alone. Tabito immediately realises it when he wakes up and attempts to use his eyes. Enoki tells him that he will lose his sight if this goes on … …
Official Website: www.ntv.co.jp/tabito

This blog contains information and musings on current and upcoming Japanese dramas but is not intended to be comprehensive.
View all posts by jadefrost →
This entry was posted in Fall 2015 Drama Specials and tagged Hamada Gaku, Kitaoji Kinya, Matsuzaka Tori, Shikaku Tantei Higurashi Tabito Series, Tabe Mikako, Usuda Asami. Bookmark the permalink.