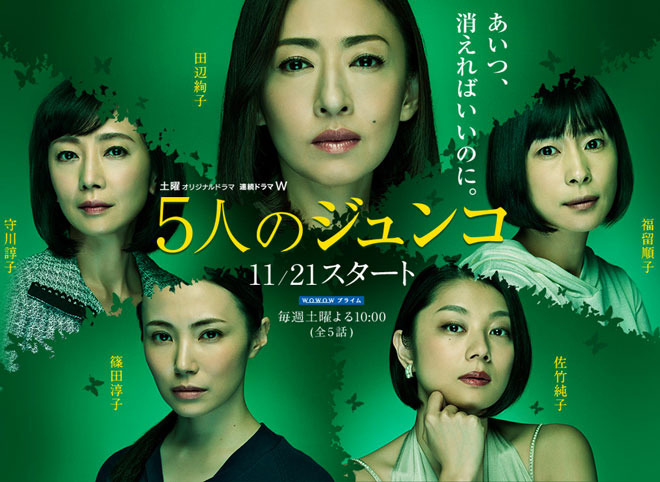 Story
Satake Junko is arrested as a suspect in a series of suspicious deaths. The murders of five men she allegedly killed are all over television talk shows every day. As the media coverage heats up, a journalist Tanabe Junko, who works for the popular non-fiction writer Kubota Mei, and Kubota’s new assistant Ukai Yuko begin to gather information on the cases in a search for the truth. Tanabe obtains information from Satake’s junior high school classmate that Shinoda Junko had been a good friend and goes to visit Shinoda’s company. Meanwhile, Fukudome Junko, a former workplace colleague and full-time housewife who had seen Tanabe on a television programme, comes to visit her. Tanabe wonders if she will provide information that will help them. But all that comes out from Fukudome’s mouth is idle talk about her worries regarding the hierarchy of company housing. Tanabe pulls herself together and continues gathering information on the cases. At one point, a person believed to be one of the victims linked to the Satake cases emerges. He is the son of the late Morikawa Junko. These Junkos – women of different circumstances who have nothing to do with the cases – find themselves at the mercy of the first name they share “Junko”. Before long, they start to get embroiled in a torrent of malice.

Characters
Matsuyuki Yasuko as Tanabe Junko
A journalist. She is devoted to her work as Kubota Mei’s right-hand woman. Gathering information on Satake Junko’s case in pursuit of the truth, she has numerous interviews with Shinoda Junko, Fukudome Junko and Morikawa Junko. She has her own past as well.

Mimura as Shinoda Junko
An office lady who works for a call centre. She was a friend who shared common interests with Satake Junko during junior high school. But at some point, she refused to go to school … …

Nishida Naomi as Fukudome Junko
An ordinary housewife who lives in company housing and has a 10-year-old child. She supports her husband Kota and manages the family expenses. She dreams of buying her own home someday.

Aso Yumi as Morikawa Mika (Junko)
The daughter of Morikawa Junko. Although she looks like her mother, her personality is the exact opposite. She frequently has troubles such as the employees of the bar that her mother left to her and money problems.

Koike Eiko as Satake Junko
A suspect in a series of suspicious deaths. A wicked woman who allegedly made a number of men support her and took five lives. She starts to take an interest in the past of Tanabe Junko who interviews her about the cases.

Tsuda Kanji as Tanabe Takaya
Tanabe Junko’s husband. He used to be a top reporter but is now in charge of a third-rate gossip magazine.

Watanabe Makiko as Kubota Mei
A popular non-fiction writer who is a regular on many television programmes and magazines. She gave birth to her eldest daughter a short time ago/

Kobayashi Ryoko as Ukai Yuko
A new assistant. She meddles in Tanabe Junko’s work. She is interested in Tanabe’s past.

This blog contains information and musings on current and upcoming Japanese dramas but is not intended to be comprehensive.
View all posts by jadefrost →
This entry was posted in Fall 2015 Dramas, WOWOW and tagged 5-nin no Junko, Aso Yumi, Koike Eiko, Matsuyuki Yasuko, Mimura. Bookmark the permalink.