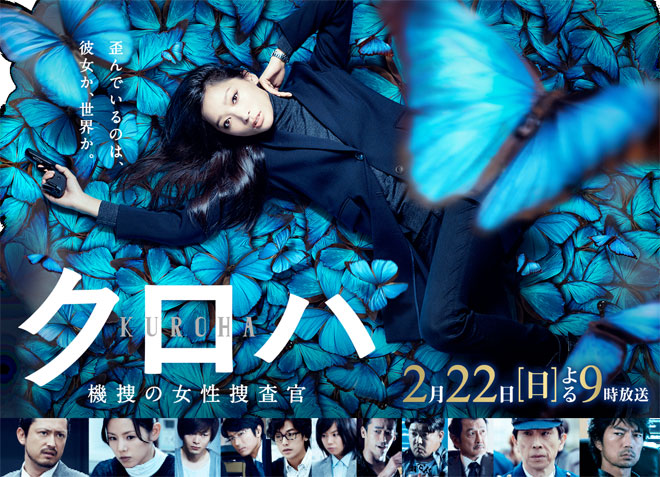 Date: From 9.00 p.m., 22 February 2015
Scriptwriter: Takahashi Yuya (Kindaichi Shounen no Jikenbo N, 35-sai no Koukousei, Perfect Blue)
Original Work: Pla Baroque by Yuki Mitsutaka
Cast: Anne, Ikeuchi Hiroyuki, Konishi Manami, Nakamura Tomoya, Mashima Hidekazu, Fukushi Seiji, Nomura Masumi, Kobayashi Naoki, Yoshida Kotaro, Danta Yasunori, Nakamura Toru
Synopsis: Detective Kuroha Yu (Anne) is a sharp shooter who works for the Mobile Investigation Unit of Kanagawa Prefectural Police’s headquarters. Her unit would rush to the scene and conduct the initial investigation when a case occurs. One day, the bodies of 14 men and women are found frozen to death in rental containers in the harbour district. Kuroha, who was the first person to make the discovery, is assigned to the investigation task force for the mass suicide. During the investigation, a suicide note is found. The task force leader, Kaga Kota (Ikeuchi Hiroyuki), believes this case is a straightforward mass suicide. However, Kuroha insists that they should search for the mastermind who assisted the suicides, and has a confrontation with him. That night, Kuroha asks her elder sister, Ryo (Konishi Manami), who is a psychiatrist, for her opinion on the unnatural suicides. Ryo’s advice that there should have been other suicide notes equal to the number of people, spurs Kuroha to set out to investigate on her own. There is a group on the Internet called “Wisdom of the Deep Forest” which talks freely about crimes at night. Kuroha interacts with the anonymous online citizens under the pseudonym, Ageha. One night after the case, a man who introduces himself as Raiun (Kobayashi Naoki) joins the group. The topic that night is euthanasia. Raiun expounds his own theory on euthanasia when a member called BJ (Red Rice) says he cannot understand it. Raiun’s views draw Kuroha’s attention. Kuroha’s low-profile investigation turns up one suicide note more than the number of dead bodies. Realising that there is a person who has not committed suicide yet, Kuroha and the rest of the task force search for this remaining person. But as they get closer to the heart of the case, something sinister beyond all imagination takes root … …
Official Website: www.tv-asahi.co.jp/kuroha

This blog contains information and musings on current and upcoming Japanese dramas but is not intended to be comprehensive.
View all posts by jadefrost →
This entry was posted in TV Asahi, Winter 2015 Drama Specials and tagged Anne, Ikeuchi Hiroyuki, Kuroha, Nakamura Toru, Yoshida Kotaro. Bookmark the permalink.