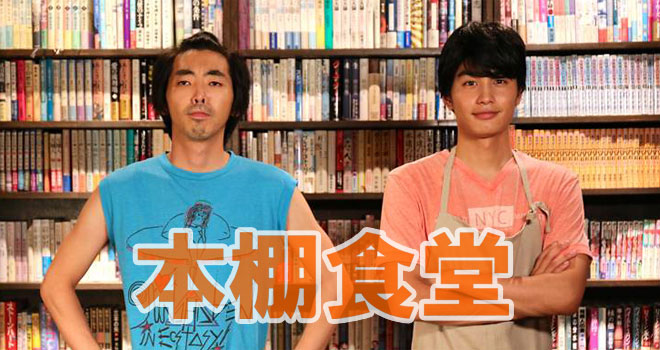 Story
Himekawa Rosanna is a popular girls manga writer who had a hit with her debut work ‘Awkward Moment’. In truth, Himekawa Rosanna is the pen name of writing duo Sanada Nishiki and Yamada Jiro. The bookshelves of the secret library in their home office are lined with novels, essays and manga full of delicious scenes and descriptions. The two of them are hard-core gourmands with all these contents in their minds. When they are under the pressure of manga series deadlines, they would routinely escape from reality and into the “2D gourmet” in the books, forget about their deadlines and end up standing in the kitchen. Nishiki and Jiro pursue the 2D gourmet while dodging the chasers of Sakurada Miki, their looming editor from hell. Will they be able to have their fill of 2D gourmet?

Characters
Nakamura Aoi as Sanada Nishiki
A 25-year-old native of Tokyo’s Edogawa ward. Because he was tormented as he grew up with three older sisters, he is not good with females. In an environment surrounded by his sisters’ girls manga, ‘Oishinbo’, the only manga for boys’ in the house, became his favourite book to the extent that he could memorise everything. He is in charge of male characters, as one half of Himekawa Rosanna.

Emoto Tokio as Yamada Jiro
A 27-year-old native of Gunma Prefecture. He is a daydreamer with an extremely inflated sense of self. When he was a fourth grade elementary school student, he took part in a Gunma elementary school students’ cooking contest. He ripped off ‘Cooking Papa’ material and won. He has not been able to forget that pleasurable sensation and starts to get hooked on “2D gourmet”. He is in charge of female characters, as one half of Himekawa Rosanna.

Yui Ryoko as Sakurada Miki
The originator of the manga artist Himekawa Rosanna. She scouted Sanada Nishiki after seeing the manuscript he brought for gourmet manga. She made Sanada partner Yamada Jiro who was an assistant at that time. Nicknamed “Monster Sakurada”, her chasers make even influential writers quake. She is a single, very aggressive woman who takes the initiative in relationships with men.

Yamashita Rio as Ume-chan
Himekawa Rosanna’s assistant. She is cool, good at her job but does not talk much. Her true identity is unknown. No matter how busy she is, she would take a break for meals.

Aizawa Rina as Kurata Sumire
A neighbour of Sanada Nishiki and Yamada Jiro. She is living together with Sugita Kenji. She is majoring in food science in graduate school.

Makita Sports as Sugita Kenji
A neighbour of Sanada Nishiki and Yamada Jiro. He is cohabiting with Kurata Sumire. He seems to be involved in risky business from his looks, but is actually the president of a respectable company. He loves the food that Sanada and Yamada cooks.

This blog contains information and musings on current and upcoming Japanese dramas but is not intended to be comprehensive.
View all posts by jadefrost →
This entry was posted in NHK, Summer 2014 Drama Specials and tagged Hondana Shokudo Series, Makita Sports, Nakamura Aoi. Bookmark the permalink.