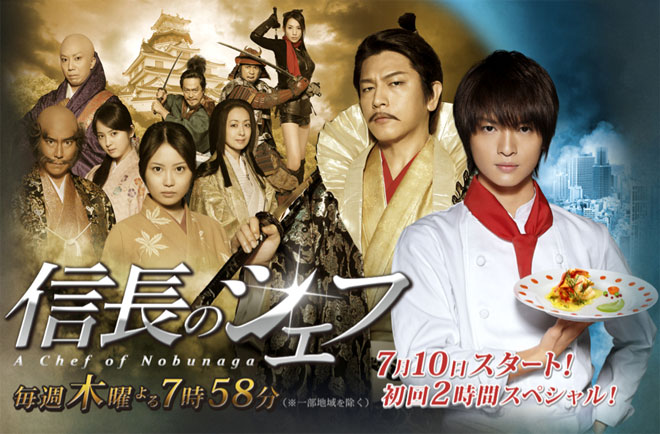 Story
Ken has decided to remain in the Sengoku era and live as Oda Nobunaga’s chef. He is taken along to the battle between the troops of Azai Nagamasa and Asakura Yoshikage. While the two armies are exhausted from the long-drawn battle, Nobunaga bypasses Nagamasa and proposes to make peace with Yoshikage. He orders Ken to make a suggestion for this purpose. Realising that it will soon be the New Year, Ken and Natsu set foot on the Asakuras stronghold of Mt Hiei as merchants, and treat his troops to the traditional zouni soup of their hometown, Echizen. The troops are reminded of the flavours of their hometown. Just as their morale is being worn down, Nagamasa is notified that they are coming down Mt Hiei. Guessing that this is another trick of Nobunaga’s chef, Ken, Nagamasa lets loose pursuers with the intention of capturing Ken. Ken is saved in the nick of time by Akechi Mitsuhide. But when he hears Mitsuhide say, “The people targeting the master’s life are not only enemies outside,” he feels uneasy. At that moment, the monk Kennyo and shogun Ashikaga Yoshiaki are having a secret meeting at Ishiyama Hongan-ji. There is a mysterious beauty, Karen, who waits on Kennyo. Like Ken, she seems to be a patissier who has come from the same future … … In addition, Matsunaga Hisahide who carries a missive from Yoshiaki is with Takeda Shingen of Kofu. With the construction of a new Azuchi Castle, Nobunaga invites Hisahide as a vassal. However, the people are Nobunaga are unanimous in their opinion that Hisahide is a dangerous person. Ken is ordered to “show Hisahide’s heart through banquet food to entertain him” … …

Characters
Tamamori Yuta as Ken
A French chef who has gone back in time from the present to the Sengoku era. Although he lost his memory, he retained his wealth of knowledge about Japanese history and cuisine. Because of that, his culinary skills were acknowledged by Oda Nobunaga and he ended up working as Nobunaga’s personal chef. He also enjoys Nobunaga’ trust due to the numerous unreasonable demands from Nobunaga which he has met.

Oikawa Mitsuhiro as Oda Nobunaga
A Sengoku era general with foresight and charisma. He wages war under the pretext of unifying the nation and works towards his ideal of a country. However, in order to achieve his goal, he realises that cannot just use military force. He banks on using Ken’s culinary skills to solve political problems.

Shida Mirai as Natsu
A young swordsmith who saved Ken while he was on the brink of death. She follows Ken when he becomes Oda Nobunaga’s chef, and works under him as an apprentice, but has to disguise as a male because females are barred from the general’s kitchen. Although she likes can, she is not able to express her feelings.

Sasaki Nozomi as Karen
A mysterious beauty who has taken refuge with Kennyo at Ishiyama Hongan-ji Like Ken, she is believed to have come from the future.

Takashima Masanobu as Takeda Shingen
One of the best, famous generals of the Sengoku era. Called the “Tiger of Kofu”, he becomes Nobunaga’s long-time enemy.

Saito Yuki as Nouhime
Oda Nobunaga’s legal wife. It is not known if she is a friend or foe to Ken, but she looks at him with cold eyes.

Inagaki Goro as Akechi Mitsuhide
Oda Nobunaga’s vassal. In history, he later attacked his lord in the famous Honnoji Incident just as Nobunaga was about to dominate the whole country. He shows an interest in Ken who says he has come from the future, and tries to find out something. He tells Ken the way to return to the future.

This blog contains information and musings on current and upcoming Japanese dramas but is not intended to be comprehensive.
View all posts by jadefrost →
This entry was posted in Summer 2014 Dramas, TV Asahi and tagged Inagaki Goro, Oikawa Mitsuhiro, Shida Mira, Takashima Masanobu. Bookmark the permalink.