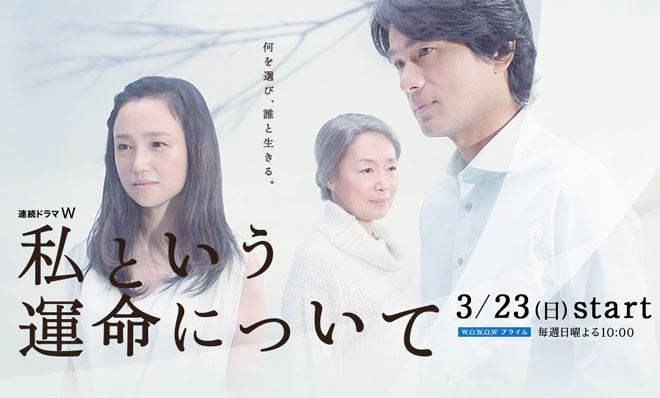 Story
In 1993, the economy is in the doldrums. Fuyuki Aki works in a big electronics manufacturer as the first female in its main career track. But unlike the male employees, she is not even allowed to test her ability and feels frustrated by her current situation. Meanwhile, Aki learns that her colleague and ex-boyfriend Sato Yasushi is marrying Otsubo Arisa, a junior who works in an administrative position, and she feels unsettled. Aki is favoured by Yasushi’s mother Sachiko, but she tells her that they broke up two years ago. She feels a void for not being able to spread her own wings in the male-dominated world, along with an anger at the male species. So she could not accept the feelings of the straightforward Yasushi. On the morning of the wedding ceremony, Aki receives a letter from Sachiko. It reads “I believed you and I shared the same destiny. Aki-san, why did you misjudge?” Aki is bewildered by the feelings of pain that inundate her. As if resisting these words, Aki tries to take control of her own destiny but … …

Characters
Nagasaku Hiromi as Fuyuki Aki
The first female in the main career track at a major electronics manufacturer. Despite being outstanding, she is not given the same opportunity to demonstrate her ability like the male employees. Because of that, she cannot take the step to marriage with her colleague Yasushi and decides to break up. However … …

Eguchi Yosuke as Sato Yasushi
Fuyuki Aki’s ex-boyfriend. He joined the company in the same year and works for the popular overseas division. Although he is kind and diligent, he lacks hunger. He decides to marry another woman in order to get over Aki and try to embark on a new path.

Ikeuchi Hiroyuki as Inagaki Junpei
A passionate industrial designer. He meets Fuyuki Aki after she moves to the Fukuoka branch office and they become a couple.

Miyamoto Nobuko as Sato Sachiko
Sato Yasushi’s mother. She runs a sake brewery in Nagaoka, Niigata Prefecture. When she was first introduced to Fuyuki Aki by her son, her instinct was that “this girl is meant to be my daughter-in-law”. She thinks of Aki as her biological daughter and still wishes for marriage between Yasushi and Aki.

Shiomi Sansei as Fuyuki Shiro
Fuyuki Aki’s father. A university professor. He worries about his unmarried daughter and son who has a sick wife.

Miura Takahiro as Fuyuki Masato
Fuyuki Aki’s younger brother. A newspaper reporter. He decides to get married before Aki who is taking forever to settle down.

Ota Rina as Fuyuki Saori
Fuyuki Masato’s wife. Despite her serious heart illness, she takes life in her own hands. She decides to try to love Masato and goes ahead with marriage.

Fujisawa Ema as Otsubo Arisa
A regular office lady who is Fuyuki Aki’s junior. She is to tie the knot with up-and-coming Sato Yasushi and becomes the envy of female colleagues.

This blog contains information and musings on current and upcoming Japanese dramas but is not intended to be comprehensive.
View all posts by jadefrost →
This entry was posted in Spring 2014 Dramas, WOWOW and tagged Eguchi Yosuke, Nagasaku Hiromi, Okada Yoshikazu, Watashi to iu Unmei ni Tsuite. Bookmark the permalink.