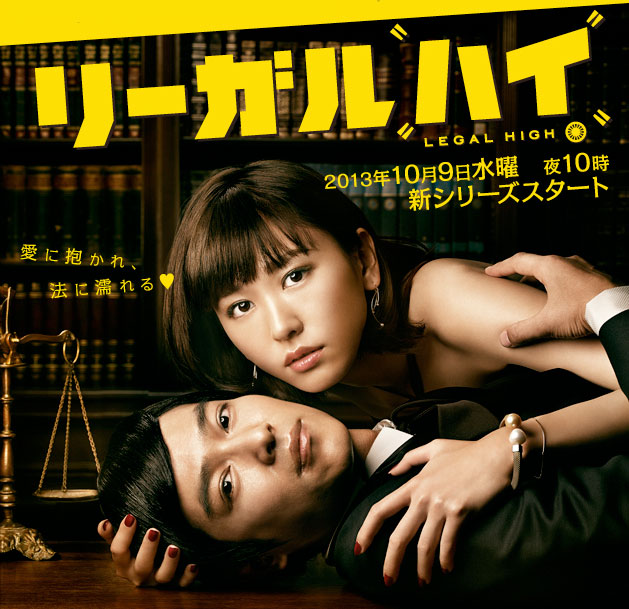 Story
The combination of Komikado Kensuke and Mayuzumi Machiko has produced an extended winning streak in court. This time, Komikado and Machiko take a case by fans who claim that they were deceived by their idol whose love problems had been exposed. Having driven the defendant into a corner with preposterous logic, Komikado appoints Hanyu Haruki and not Machiko to take his turn. Hanyu appeals to human nature and gets the idol to admit to the charge. That night, a triumphant celebration is held at Komikado’s law firm. Hanryu, the prosecutor, has been at the law firm to gain practical experience but it comes to an end today. Komikado seems charmed by Hanyu. He invites him to quit being a prosecutor and join his firm. However, Hanyu says that he is seeking his own path and bids Komikado farewell. At that moment, Komikado’s rival Miki Choichiro is asked a favour by his veteran lawyer Isogai Kunimitsu who wants to give up a case that he is in charge of. Miki will not allow it, but he believes that the client has not hope of winning a verdict of not guilty. Machiko reports to Komikado that a gritty case has come. In fact it is the case that Isogai had dropped. The client is Ando Kiwa who has been sentenced to death on charges of murder and attempted murder of the president of a transportation company and his daughter. During the second hearing, there are even allegations that the suspicious deaths of the husbands of the twice divorced Kiwa were because of insurance money. Komikado visits the prison with Machiko. Although he is reluctant, he accepts Kiwa’s proposal. Furthermore, the two of them also succeed in meeting the public prosecutor in charge of the trial through arrangements made by Hanyu. The person introduced is Daigo Minoru, an eccentric chief public prosecutor.

Characters
Sakai Masato as Komikado Kensuke
A pig-headed, sharp-tongued, cynical, temperamental spendthrift, but a competent lawyer who has never lost a court case. A genius at strategising the victory in every case he takes, he thinks that winning is everything. He unapologetically says, “Winners are justice.” “Court cases are games.” His father Seizo was a lawyer who was respected not only by the local legal community but also Tokyo’s. However, he was a tyrant at home. His father was exceptionally harsh in schooling him since childhood and he entirely rebelled. He never studied for his exams and went to the law faculty of a third-rate university. Maybe he was in some way emulating his father. In his third-year, he made up his mind to start studying for the bar exam. He passed it in one shot while in school and became a lawyer. He used to belong to Miki Choichoro’s law firm, but was fired for problems such as tactics that were barely legal and an arrogance that led him to demand outrageous legal fees. He took along many big corporate clients when he set up his own firm. His private office doubles as a luxurious dwelling. Furthermore, he is successful in his investments, and because he charges exorbitant consulting fees, he can live comfortably without working. He has been away from the courts for a long time. He overcharges and turns away requests of little importance, and lives a leisurely life. He has a great love for money, prestige and women. Needless to say, he has a terrible reputation within the industry, and is even mocked as a swindler. However, behind that demeanour are values that would rouse him to go all the way and fight anything that rocks what is right and wrong. His creed is “Lawyers certainly do not exist to influence people’s lives, but only to work for the interest of clients.” “Don’t rely on judicial precedents, create precedents!”

Aragaki Yui as Mayuzumi Machiko
A female lawyer who passed the bar exam by studying extra hard and is filled with a sense of mission for social justice and the socially vulnerable. She is a ridiculously serious, clumsy person who crams studies too much. Her nickname is the “girl who memorised the whole book of six major laws”. Because her sense of justice is too strong, she lacks flexibility. If the other party’s convictions are different from her own, she will not compromise and instead pick fights that tend to get out of control. The eldest daughter of an education-obsessed salaryman, she had been the class representative since first grade in elementary school. The people around her gave her the nickname, “morning drama heroine”. From elementary school to high school, she was in an affiliate of Ochanomizu University. However, her failure to qualify for the university was the greatest setback in her life. She entered the law faculty of Waseda University whose entrance exam she had taken as a backup measure. That motivated her to be a lawyer. She has her own unique fashion sense, taste and ideas. Incidentally, she is tone deaf. Perhaps her inability to read situations is the reason why she has no friends. Because she is not savvy about the world, she gets despondent when she sees social reality in a variety of contexts, but her innate optimism makes her bounce back quickly. She clashes with Komikado Kensuke whose personality and convictions are the exact opposite of hers, over every little thing. However, she is also similar to him in that they are both regarded as a nuisance by the legal community and do not fawn on people because of their extreme personalities. She gets pushed around by Komikado’s willfulness and also attacked by his caustic tongue, but she is not daunted and snaps back at him. At times, it is the opposite situation. She does not know if she feels respect and love for Komikado. At least, she will not admit to it.

Okada Masaki as Hanyu Haruki
The young representative of the legal firm Nexus. His father is an employee of a leading trading company and his mother is a writer of children’s literature. He returned to Japan after living abroad with his family from a young age, and entered the legal circle from Keio University Law School. During his university days, he backpacked around the world and still continues to keep in touch with the people he met at that time through email or phone. This experience impressed on him the magnificence of being more connected than ever before and the importance of friends. He believes that because the law is created by humans, it is not perfect. Rather than administer justice through law, points of compromise should be found for a win-win solution. It is because of this that he became a lawyer and set up the law firm Nexus with a buddy. The maxim of Nexus is to have the lightheartedness of a cafe where everyone can put in an appearance. Although he is a lawyer, he feels accessible and personable to many people. But unlike Komikado who would resolve every dispute as a win or lose game and force opponents to yield an argument, he aims for a solution which both the plaintiff and the defendant will accept. He is a natural at deception. This coupled with his innocent smile even ensnares Komikado. On the other hand, he privately shows an interest in Machiko and appears to have more than just friendly feelings for her. He tenaciously takes action whenever he has the opportunity and keeps watch on her.

Koyuki as Ando Kiwa
A woman who has received the death sentence in the first hearing for murdering the president of a transportation company whom she was romantically involved with to get insurance money. She has been imprisoned. Her association with the company president started right after his wife died from illness. Before he was killed, he had given her more than a total of 100 million yen in cash, car and apartment. She has been married twice. Her first husband’s manner of death is undetermined. Her second husband committed suicide. She reaped hefty insurance money from both. She has made enemies of the women in the world and is the talk in the mass media. Komikado Kensuke ends up representing her.

Furutachi Kanji as Isogai Kunimitsu
A veteran lawyer with Nexus. He used to work for Miki Choichiro’s law firm and was praised as an ace. The true state of affairs is that he would always be made to take on trials that he had no change of winning. He is a worldly-wise man who has gone through hardships. Ando Kiwa’s trial spurs him to resign from the firm and join Nexus. The youthful, free atmosphere at Nexus does not quite agree with him.

Namase Katsuhisa as Miki Choichiro
The head of the law firm Miki, which is located in a big, high-rise building. Komikado Kensuke’s former boss. He was a former ace public prosecutor who built many criminal cases against felony and graft among bureaucrats, politicians and big business for the prosecution at one time, but suddenly quit and switched careers to be a lawyer. During his time as a prosecutor, he met Komikado, who was then a budding lawyer, on a case, and saw Komikado’s qualities as a lawyer. After he became a lawyer and started his own office, he brought Komikado in, taught him the knowledge and skills of the legal profession and groomed him. As Komikado gradually started to distinguish himself, Miki felt close to him. But on the other hand, could not stand his behaviour as he grew out of hand. It appeared that the office was taken over by Komikado, and then he lost his favourite pet hamster because of Komikado. Miki has been unusually hostile to Komikado since then. He in fact has an interesting history with Komikado’s father, Seizo, who was a legendary lawyer.

Satomi Kotaro as Hattori
A valet who is named an employee of Komikado Kensuke’s law firm. The exact opposite of Komikado and Mayuzumi Machiko, he is generous, good-natured and always with a smile. He is good at cooking and is a domestic person. He does everything with ease from Komikado’s personal care to help with work. Although he cannot keep up with complex discussions related to the law, the random comments he makes often become hints for Komikado and Machiko to win trials. His past is a mystery and he has unexpected special skills.

This blog contains information and musings on current and upcoming Japanese dramas but is not intended to be comprehensive.
View all posts by jadefrost →
This entry was posted in Fall 2013 Dramas, Fuji TV and tagged Aragaki Yui, Koyuki, Legal High, Namase Katsuhisa, Okada Masaki, Sakai Masato. Bookmark the permalink.