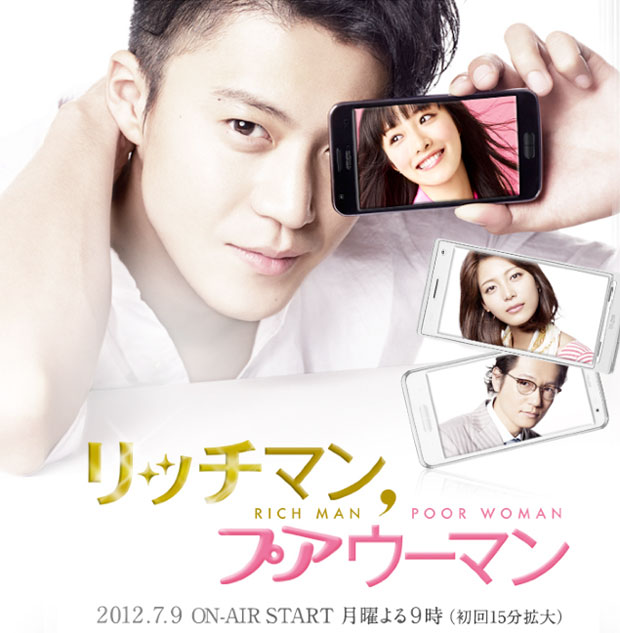 Story
At 29, Hyuga Toru is the popular young president of the IT company, Next Innovation, which is said to have a market capitalisation of 300 billion yen. Asahina Kosuke, who saw Toru’s potential, proposed to form a company. Eight years ago, the company was started in a room of the old student union building, and became an instant success. On the other hand, Sawaki Chihiro, a fourth year student at Tokyo University’s faculty of science, has not landed a job and spends each day scrambling for interviews. One day, while on her way to an interview, Chihiro notices the high-rise building that Next Innovation is in. It is a sophisticated office where stylish people work in contrast to her suit and old, low heels. At that moment, Hyuga discloses a plan to create a system to manage family registers online to Asahina and the director Yamagami Yoshiyuki. Hyuga is eager to do it before the country embarks on the work, but Yamagami shows reluctance because the initial investment would consume the company’s money. Several days later, Chihiro arrives at Next Innovation for a company information session. The hall is packed with students so she sits in the front row. Hyuga appears on stage and after he finishes his story, he starts asking the students in the front row questions. Chihiro’s turn finally comes. Suddenly asked for her number of tentative job offers, Chihiro honestly discloses that she has none. Hyuga mockingly wonders if it is the era where even Tokyo University graduates get no informal job offers or if Chihiro has a great number of flaws … … Then, he declares that she and others without tentative job offers should leave. An angry Chihiro counters that even if she was not chosen by other companies, it does not mean she is dead wood, and informs him that her name is Sawaki Chihiro. Hyuga freezes. It is the name of his mother whom he has been looking for. Some days later, Hyuga hears from Asahina that the Ministry of Internal Affairs and Communications is the first hurdle for them to proceed with the online family registers system. However, he is not well-liked by its vice-minister Fujikawa Masako. That is when it strikes him that Chihiro is like Fujikawa and he summons her over. He thrusts a thick file at Chihiro when she arrives and orders her to memorise it by tomorrow for a luncheon party hosted by the Minister of Internal Affairs and Communications that they are to attend. The next day, a nervous Chihiro talks about the significance of the project and leaves Fujikawa with a good impression. But she makes the mistake of saying that the introduction of Next Innovation’s technology would prevent the disappearance of pension records as they take their leave, and Fujikawa’s face darkens because she was formerly from the Social Insurance Agency … …

Characters
Oguri Shun as Hyuga Toru
The president of Next Innovation. His management skills are neither outstanding nor is his ability to attract large capital or have a long-term view of the future. The website he did as a hobby at home quickly generated cash and he found him a billionaire. Because he dislikes people, he keeps thinking that all those who approach him are after his money. The people around him call him various names, “”billionaire”, “master of mobile games”, “con man”, “eccentric”, “geek”. He takes an interest in Sawaki Chihiro who suddenly appears before him and is completely different from him.

Ishihara Satomi as Sawaki Chihiro/Natsui Makoto
A fourth year Tokyo University science faculty student who is job hunting. She has been a hardworking person since young, studying diligently and living in a down-to-earth way. However, she is tactless as well as shy. This makes it difficult for her to find employment and her job hunt has been a complete failure. One day, she attends a Next Innovation’s company information session, and through a strange turn of events ends up working for Hyuga Toru. His tendency to make remarks that hurt people without giving a second thought aggravates her, but before long, she senses his idealism and loneliness because of that, and starts falling for him.

Aibu Saki as Asahina Yoko
Asahina Kosuke’s younger sister. A restaurant chef. She dropped out of high school and went on to a vocational school for culinary arts. After that she went to California for training and was voted one of 100 promising young chefs. With this recognition of her abilities, she is assigned to be the chef of a newly opened restaurant at the building where Next Innovation is located. She is a rare female in the male-dominated culinary business. She met Hyuga Toru way before her brother and soon falls in love with him.

Arata as Asahina Kosuke
Asahina Yoko’s older brother and the vice-president of Next Innovation. After graduating from Tokyo University, he worked at a major telecommunications company. After that, he met Hyuga Toru who is his complete opposite. Seeing Hyuga’s potential, he proposed that they start a business and Next Innovation was founded. He is mild-mannered, popular and also good at all sports. Because he and Hyuga have different personalities, they do not clash. Instead Asahina is the one who gives concrete form to Hyuga’s ideas. Theirs is a relationship where they complement each other and have formed strong bonds.

Sano Shiro as Yamagami Yoshiyuki
Next Innovation’s accountant. “I’ll give you an interesting job,” that was Asahina Kosuke’s promise to him to get him to join the company. Although he is an analog person, he can change to suit the situation because of his flexible personality. He has faith in Asahina but dislikes Hyuga Toru’s impudence.