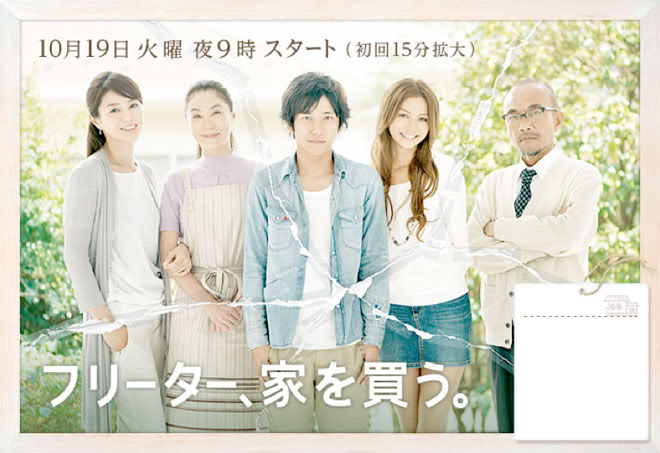 Story
Take Seiji, who graduated from a third-rate university, found work at a mid-sized components company. However, he could not become accustomed to the corporate culture and left the company in just three months. His father, Seiichi, who has been dedicated to working as an accountant at a mid-sized trading company, is angry that Seiji quit without consulting him. But Sumiko speaks up for her son. Seiji believes that he can be employed immediately if he set his mind to it and would find a company that fits him. However, his job hunt does not go as well as he wishes and his CVs are returned by the companies he had interviewed with. A staff member of the government’s employment agency sees Seiji’s resignation from his previous company as the problem, and suggests that he consider employment at a F&B chain and not just his desired work in planning and development. Seiji has no intention to change his mind in spite of this. Ordered by his father to contribute to the household, Seiji takes a part-time job for the time being. However, when interpersonal relationships go badly, he immediately quits and moves to another part-time job. Annoyed at his father’s lectures each time they come face-to-face, and his mother’s concern, Seiji confines himself in his own room on the second floor when he is at home. Seiji’s older sister, Ayako, who is married to a general practitioner, also worries about her younger brother’s future. Then one day, Seiji, who had shut himself in his own room and played a computer game all day, calls out to his mother when he feels hungry. However, there is no reply. So he has no choice but to come downstairs, only to find his mother sitting down in the kitchen with food from the fridge scattered about on the floor and table. Sumiko sways as she repeatedly mutters, “Sorry, I could not die today too.” Seiji and Ayako bring their mother to a hospital. They are told that she is suffering from depression and needs to undergo therapy to relieve the stress that is the cause of her condition, along with the efforts of the family. Seiji, who regrets that he had been hard on his mother, decides to find another job. He starts a part-time construction work at Daietsu Civil Engineering which is run by Daietsu Sadao. There, he meets Chiba Manami, an employee of a major general contractor who has been transferred to Daietsu Civil Engineering …

Characters
Ninomiya Kazunari as Take Seiji
A freeter. After graduating from a third-rate university, he joined a mid-sized components company but resigned after just three months. While part-timing here and there, he learns that his mother is suffering from serious depression and resolves to start working at a construction site.

Karina as Chiba Manami
An employee of Kijima Construction. Her dream is to be an architect but she does not want to be one who can only draw paper designs and sweats it out at construction sites. She has had a great love for bridges since she was a child, and is a geek who can go on forever about bridges.

Igawa Haruka as Nagata Ayako
Take Seiji’s older sister. The wife of the director of Nagata Hospital. She has one son called Tomoya. Her policy on child raising does not correspond with that of her mother-in-law, Noriko, and their relationship grows strained.

Takenaka Naoto as Take Seiichi
Take Seiji’s father. A stubborn father who does not pay much attention to his family and thinks his unemployed son is a useless fellow.

Asano Atsuko as Take Sumiko
Take Seiji’s mother. A full-time housewife. She is an affectionate mother who is always worried about Seiji but finds herself caught between her husband and son and comes down with depression.

This blog contains information and musings on current and upcoming Japanese dramas but is not intended to be comprehensive.
View all posts by jadefrost →
This entry was posted in Fall 2010 Dramas, Fuji TV and tagged Asano Atsuko, Freeter Ie o Kau, Igawa Haruka, Karina, Ninomiya Kazunari. Bookmark the permalink.