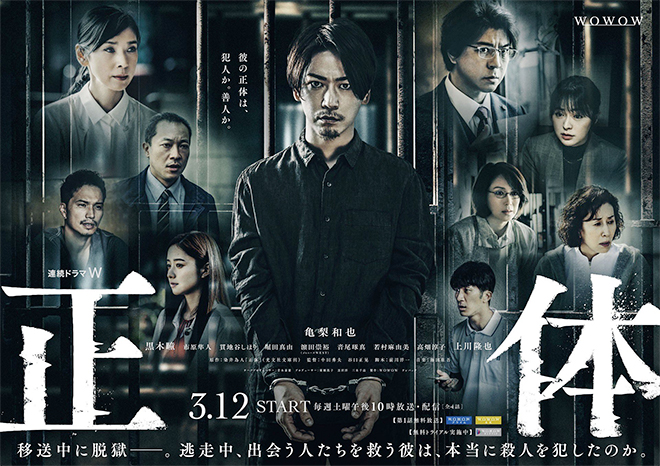 Synopsis
Kaburagi Keiichi has been arrested for the murder of a couple and sentenced to death. He suddenly feels ill in prison and collapses. However, while he is being transported to a hospital, he manages to escape from a toilet at a service area in an unguarded moment and gets away. Kaburagi’s jailbreak is widely reported by the mass media and the police mount a manhunt but are not able to arrest him. He becomes a fugitive, changing his name and appearance at each place he hides. Kaburagi encounters all sorts of people including construction site worker Nonomura Kazuya, writer and director Ando Sayaka as well as lawyer Watanabe Junji who was falsely accused of molest and helps them out of tight spots. Why is he saving people? Is this his revenge for being framed? And what is his true self? When Nonomura and the others realise that he is a criminal on death row and on the wanted list, they begin to question whether he is truly a murderer.

Characters
Kamenashi Kazuya as Kaburagi Keiichi
He was arrested as a suspect in the murder of a couple and sentenced to death. He escapes while being transported to a hospital and saves the people he meets at his hiding places from various predicaments while on the run.

Kuroki Hitomi as Io Yuko
The mother of the man in the case of the dead couple that Kaburagi Keiichi allegedly killed. She is suffering from the early onset of dementia. As the only witness of the case, she has been traumatised and is recuperating at a nursing home.

Ichihara Hayato as Nonomura Kazuya
A colleague at Ushikubo Engineering that Kaburagi Keiichi hides at as a construction site worker after changing his name to Endo Yuichi. He teams up with Kaburagi to change the poor working conditions and a friendship eventuallly begins to develop between them.

Kanjiya Shihori as Ando Sayaka
A writer and director of an online publisher that Kaburagi Keiichi hides at after changing his name to Nasu Takashi. She is concerned about Kaburagi who has no relatives and they start living together. However, she falls in love with him.

Hotta Mayu as Sakai Mai
A colleague at Aoba nursing home that Kaburagi Keiichi hides at as a staff after changing his name to Sakurai Koji. He is concerned about Io Yuko who is currently recuperating at the home and has been diligently supporting her.

Kamikawa Takaya as Watanabe Junji
A lawyer who was falsely accused of molest. He was about to jump from an overhead bridge when he was saved by Kaburagi Keiichi. He makes every effort to clear his name with Kaburagi’s help.

Wakamura Mayumi as Sasahara Hiroko
A part-time staff at a bread factory that Kaburagi Keiichi hides at after changing his name to Kyuma Michisato. She is the younger sister of Io Yuko. She is suspicious and wary of Kyuma who has been asking her probing questions.

Takahata Atsuko as Kondo Setsue
Sasahara Hiroko’s fellow part-timer and a housewife who fell victim to a phone scam involving calls from people pretending to be relatives in distress. She feels disconsolate that she was scammed, and Kyuma Michisato offers her a helping hand.

This blog contains information and musings on current and upcoming Japanese dramas but is not intended to be comprehensive.
View all posts by jadefrost →
This entry was posted in Spring 2022 Dramas, WOWOW and tagged Kamenashi Kazuya, Kamikawa Takaya, Kanjiya Shihori, Kuroki Hitomi, Maekawa Yoichi, Okunuki Kaoru, Shoutai, Takahata Atsuko. Bookmark the permalink.