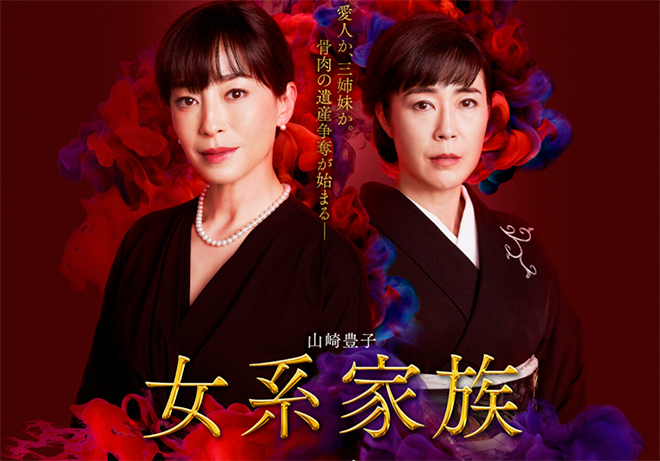 Date: From 9.00 p.m., 4 & 5 December 2021
Original Work: Nyokei Kazoku by Yamazaki Toyoko
Scriptwriter: Tsuruhashi Yasuo (Shiroi Kyoto (2019), Keikan no Chi)
Director: Tsuruhashi Yasuo
Cast: Miyazawa Rie, Terajima Shinobu, Mizukawa Asami, Yamamoto Mizuki, Watanabe Eri, Hasegawa Tomoharu, Yamamura Momiji, Ito Hideaki, Yo Kimiko, Yakusho Koji (guest star), Okuda Eiji
Synopsis: The Yajimas run Yajima Shoten, a cotton wholesale business of long standing in Semba, Osaka. Generations of women in the family have kept the business going. When fourth generation owner Yajima Yoshizo (Yakusho Koji) passes away, leaving an estate worth several billion yen, his will is read by general manager Ono Uichi (Okuda Eiji). Yoshizo has three daughters – eldest daughter Yajima Fujiyo (Terajima Shinobu) got married but divorced three years ago and moved back home; second daughter Chizu (Mizukawa Asami) took a husband with the intention of assuming the business; and third daughter Hinako (Yamamoto Mizuki), has been shielded by their aunt Yoshiko (Watanabe Eri) because she is still somewhat naive. However, the contents of the will that is disclosed is beyond the imagination of the women. It turns out that the name of their father’s mistress Hamada Fumino (Miyazawa Rie) is mentioned and she will also have a share of the inheritance. Of course the sisters and their aunt dispute the will. Furthermore, it is obvious that Fumino is carrying Yoshizo’s child. The men surrounding Fujiyo, Chizu and Hinako including Umemura Yoshisaburo (Ito Hideaki), a teacher of traditional Japanese dance whom Fujiyo is on friendly terms with; Chizu’s husband Ryokichi (Hasegawa Tomoharu), and Ono get involved not only in the inheritance but also engage in an intense battle mired in desire and jealousy.
Official Website: www.tv-asahi.co.jp/nyokeikazoku

This blog contains information and musings on current and upcoming Japanese dramas but is not intended to be comprehensive.
View all posts by jadefrost →
This entry was posted in Fall 2021 Drama Specials, TV Asahi. Bookmark the permalink.