Posted on September 7, 2021 by jadefrost 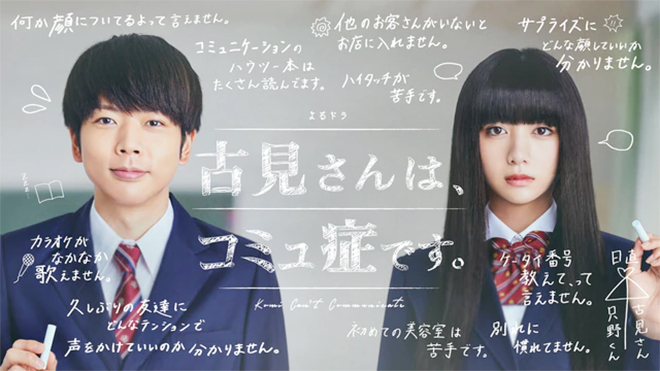 Story
Tadano Hitohito qualified for the school of his choice and became a first-year high school student in April this year. He is determined to spend the next three years peacefully and stay out of trouble. On the morning of his first day in school, he encounters a beautiful girl Komi Shoko while changing his shoes at the entrance. She looks like she has stepped out from a fashion magazine centrefold. Tadano nervously greets her without missing a beat. However, Shoko remains silent and does not respond. A depressed Tadano wonders if he is at fault. But there is a heartrending reason for Shoko’s attitude. She has a communication disorder which makes her feel uncomfortable being around people and cannot look at a person’s face and say what she thinks. Figuring out that Shoko is terrible at communicating with people, Tadano sets out to help her achieve her dream to make 100 friends and quickly discovers that sitting next to Shoko has made him the enemy of everyone in their class.

Characters
Masuda Takahisa as Tadano Hitohito
His motto is to go about everything in an ordinary fashion in an effort to lead an uneventful high school life. Although he admits to being good at reading situations, he does not know much about the subtleties of gender. However, he has a talent for seeing the best in people and his observation skills are so exceptional that it even amazes his form teacher.

Ikeda Eliza as Komi Shoko
Tadano Hitohito’s classmate who sits next to him. She is the school beauty but has great difficulty in social situations and tends to wonder how she should speak to people. She yearns to overcome this problem, make friends and enjoy high school life. She feels privately distressed that she has difficulty doing so.

Yoshikawa Ai as Manbaki Rumiko
She has trouble fitting in due to her flashy, colourful make up, heavily tanned skin, and manner of speech. She seems lively and strong-willed. But in contrast to her appearance, she feels stressed and is in poor health due to loneliness. As she cannot truly say that she wants to eat with someone, she always ends up leaving the classroom alone when it is lunch break.

Yutaro as Osana Najimi
Tadano Hitohito’s childhood friend. He has astounding communication skills that enables him to get close to anyone and become friends. Tadano remembers him as a boy but when they meet again in high school, he is wearing girl’s uniform for some reason and his gender is not known. He has actually been a acquainted with Komi Shoko since elementary school.

Onishi Ayaka as Isagi Kiyoko
Tadano Hitohito and Komi Shoko’s classmate. An extreme clean freak. She becomes a candidate to be the president of the student council and Shoko even volunteers to assist her. But she turns down her offer because she does not want to make use of Shoko’s popularity.

Mizubata Junpei as Katai Makoto
A student in the same academic year who has an unusual attachment to Tadano Hitohito on the first day of school. He has a big build and swept back dyed blonde hair. Even though he looks extremely tough, this is just an armour which serves as his method of preventing people from looking down and making fun of him, based on his junior high school experience when he ended up being absent from school.

This blog contains information and musings on current and upcoming Japanese dramas but is not intended to be comprehensive.
View all posts by jadefrost →
This entry was posted in Fall 2021 Dramas, NHK and tagged Komi-san wa Komyusho desu. Bookmark the permalink.