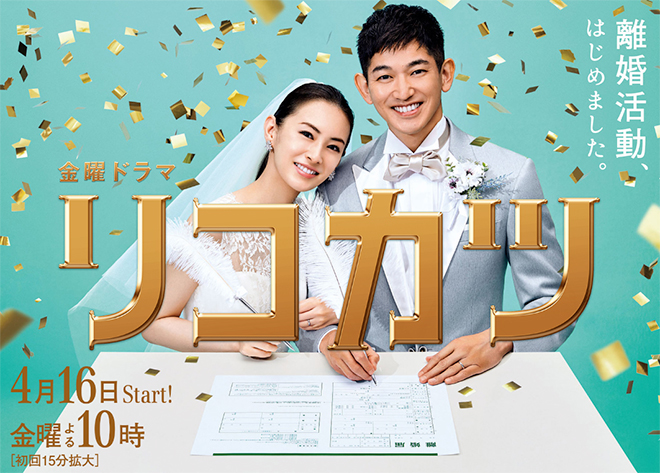 Story
Fate led to Mizuguchi Saki and Obara Koichi to tie the knot. They met by chance three months ago when Saki had an accident on a snowy mountain and was rescued by Koichi who is with the Air Rescue Wing of the Air Self Defence Force. Saki is a fashion magazine editor who grew up in a modern and liberal family while Koichi had a strict, conservative upbringing in a military family. Their lifestyles and values could not be more different but the two of them vow to start a happy life following a whirlwind romance. However, on the day after their wedding, Saki is awakened by the sound of a bugle at 4 am in the morning and made to recite the Obara family’s motto by Koichi. At work, she complains to a junior colleague Sanbongi Natsumi and is told that she would have probably been better off with her ex-boyfriend Aoyama Takaya. On one of their days off, Koichi proposes that they eat out. Saki is pleased but just about everything he does from his fashion sense to his choice of restaurant is wrong. In addition, he imposes his view on her and she ends up venting her frustrations. They get into a big quarrel and decide to get a divorce. But they have difficulty breaking the news that they are already getting divorced to their families, colleagues and friends after their lavish wedding ceremony. They therefore decide to do it in secret. Their parents have surprises in store for them. As Saki and Koichi try to tell Koichi’s parents over dinner that they are considering getting a divorce, his mother and father beat them to it by announcing their own divorce. In addition, there is a a disquieting undercurrent between Saki’s father and mother … …

Characters
Kitagawa Keiko as Obara (Mizuguchi) Saki
A editor for the fashion magazine, marie claire mode. She has been a serious and diligent since childhood. But she was always complimented for her beauty and hardly recognised for her steady efforts. She meets Obara Koichi just after breaking up with Aoyama Takaya, her boyfriend of five years. She is fashion conscious because she works for a fashion magazine. Raised in a modern and liberal family, she is honest with herself. Although she is capable at work, she is terrible at household chores.

Nagayama Eita as Obara Koichi
A medic with the Air Rescue Wing of the Air Self Defence Force. His father was also a Self Defence Force officer. As he was raised in a strict family, he is the classic straight-laced guy with naturally old-fashioned and conservative values. He is well regarded within the Self Defence Forces and trusted by his subordinates. He likes simplicity and fortitude, and basically dresses the same way all the time which makes Mizuguchi Saki call him unfashionable. He is a simple, warm and very serious guy.

Takahashi Mitsuomi as Aoyama Takaya
Mizuguchi Saki’s ex-boyfriend. A capable lawyer who works for a law firm. He has chosen to stay single by choice as he thinks marriage is costly and also risky. He has a way with women – stylish, smart and attentive.

Shirasu Jin as Minazuki Ren
A popular romance writer who became famous after publishing his novels online. He is selfish and has a sharp tongue. Although he is called a romance guru, he does not think that love exists in this world.

Tanabe Momoko as Ichinose Jun
An assistant pilot with the Air Rescue Wing of the Air Self Defence Force. She is actually secretly infatuated with Obara Koichi and thinks that she is a better match with him than Mizuguchi Saki.

Miyazaki Yoshiko as Obara Kaoru
Obara Koichi’s mother. A full-time housewife who is good at cooking. She does the housework and raised their son well. She has been a good wife to her husband Tadashi and the image of an ideal mother to Koichi. She has devoted her life to them for so many years, and is in fact secretly in the process of getting a divorce … …

Sakou Yoshi as Obara Tadashi
Obara Koichi’s father. A former Self Defence Force officer who comes from a family of Self Defence Force personnel from generation to generation. He is now retired and has been living with his wife Kaoru ever since Koichi got married. He leaves family matters entirely to Kaoru and cannot do household chores at all. In fact, he stubbornly believes that a wife should follow her husband.

Hiraiwa Kami as Shikahama Kaede
Mizuguchi Saki’s married older sister whom she is close to. She has a daughter who is in the second grade in elementary school. She seems to have a good relationship with her husband but she actually has a secret. Unlike the serious Saki, she is the laidback, carefree type.

Mitsuishi Kotono as Mizuguchi Midori
Mizuguchi Saki’s mother. She is the writer of Miracle Beauty Mizuguchi Midori and a popular model who looks young for her age. She pays a lot of attention to her appearance and is the type who likes to be fawned over. She appears to be free-spirited but in fact also has a secret that she cannot tell her family … …

Sano Shiro/Hirata Mitsuru as Mizuguchi Takeshi
Mizuguchi Saki’s father. He still shows off his name card with the major advertising agency Denpakudo even though he retired half a year ago. He was a creator and formerly an accountant at Denpakudo. He is an incurable flirt but means no offense.

This blog contains information and musings on current and upcoming Japanese dramas but is not intended to be comprehensive.
View all posts by jadefrost →
This entry was posted in Spring 2021 Dramas, TBS/MBS and tagged Eita, Kitagawa Keiko, Rikokatsu, Sano Shiro. Bookmark the permalink.