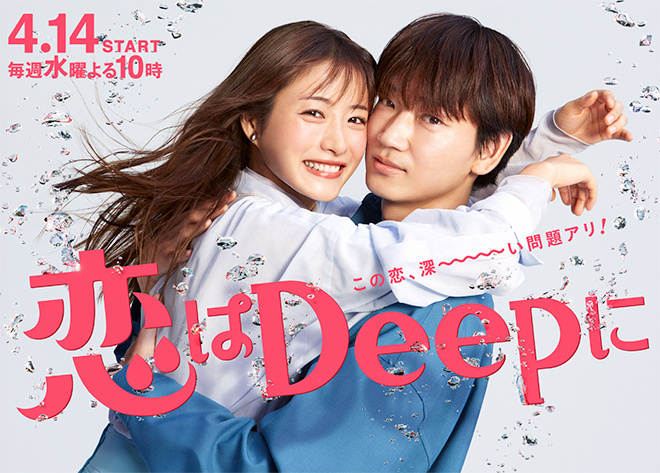 Story
Nagisa Mio, an oceanographer at Shibaura University of Marine Science and Technology, is very interested in fishes and loves everything about the sea. Despite her cheerful smile and kind, good-natured personality, she is reticent about her family and past. Hasuda Rintaro, the second of three sons of a wealthy family, is feared by the people around him as he comes across as someone who is hard to approach. But beneath that armour is a young man with a pure heart and no airs. He has been summoned back to Japan due to his father Taro’s poor health and made to spearhead a resort under development by Hasuda Trust. Mio learns that a massive seaside resort is being constructed at Hoshigahama Beach. While Mio wants to protect the marine life in the ocean and opposes the resort’s development, Rintaro is staking his life on it. They meet each other when Mio appears on a TV programme where Hasuda Trust is one of the sponsors, and have the worst kind of encounter as a result of their opposing views on environmental conservation and resort development. But the next day, Mio is asked by Rintaro’s older brother Kotaro, who has an adversarial relationship with him, to join the resort development team. Rintaro and Mio who seem as if they live in different worlds eventually fall in love. However, it turns out that theirs is a forbidden romance because Mio has a secret that will shock everyone. Just what is she all about and where is their love headed?!

Characters
Ishihara Satomi as Nagisa Mio
A specially appointed researcher at the office of Shibaura University of Marine Science and Technology’s Professor Kamoi Tadashi. She is familiar with marine life and surprises people by comparing everything to fishes. She always has a cheerful smile and is kind and goodnatured with everyone. She cannot say no when asked and is a pushover. She has difficulty talking about her background and some things are a mystery. She laments the pollution of the sea with plastic waste. Feeling a duty to protect the sea, she gets into action to stop the seaside resort development by Hasuda Trust.

Ayano Go as Hasuda Rintaro
The tsundere second son of the Hasuda family. He is demanding when it comes to work and is feared by the people around him as he seems to be someone who is hard to approach. However, he has the heart of a pure, simple-minded young man beneath this armour. He distanced himself from his family and went to study in England after something happened at the sea that he visited with his family when he was a child. He had been advancing in his career with a well-known consulting firm in London, but returns to Japan and is put in charge of a seaside resort development project. His personality is the exact opposite of his older brother Kotaro who was raised to be the heir and the brothers’ reunion brings their intensifying conflict into the open.

Imada Mio as Miyamae Aika
Nagisa Mio’s confidant. A specially appointed researcher at the office of Shibaura University of Marine Science and Technology’s Professor Kamoi Tadashi. She has a bright, kind, dependable and refreshingly frank personality. As she is considerate and caring, she has a tendency to put her own matters on the back burner and unconsciously give other people priority. She supports the research lab which is in danger of being merged, acting like an unofficial leader who takes charge of its individualistic members. She is very accustomed to Mio’s unfathomable behaviour and even though she senses something is going on, she believes Mio will not stop being an important friend and accepts her as she is.

Watanabe Keisuke as Hasuda Eitaro
The third son of the Hasuda family. An employee at Hasuda Trust’s Resort Development headquarters. His lax attitude at work is lamented by senior colleagues. Because of his eloquence he comes across as a carefree playboy but he is actually a capable guy who graduated from Tokyo University. He is earnest, kind at heart and takes notice of details. He occasionally says things that he is passionate about. It pains him to see his two older brothers at odds with each other and he hopes they will mend relations. He has no interest in the power struggle.

Fujimori Shingo as Tsurukawa Yusaku
An employee with Hasuda Trust’s Public Relations Department. He was Hasuda Rintaro’s ex-classmate and a close friend. They are reunited as colleagues when Rintaro returns from London and become good partners on a personal and professional level. He is the only person who is able to make jabs at Rintaro and also gives him advice on romance while Rintaro lets his guard down around him.

Hashimoto Jun as Kamoi Tadashi
A professor at Shibaura University of Marine Science and Technology. He is an authority in marine biology. One year ago, he welcomed Nagisa Mio to his office. He is kind and easygoing but has a keen eye and mind, and is also quick to make decisions. He has been struggling to prevent his research budget from being cut by the government and university. His wife passed away several years ago and he had been living alone. However, he ended up living with Mio and now makes lunch boxes for two every morning.

Otani Ryohei as Hasuda Kotaro
Hasuda Trust’s senior managing director. The eldest son of the Hasuda family who is expected to be the next CEO. He received strict education from young to groom him to become the successor and joined Hasuda Trust after graduating from Tokyo University. He gained experience working under his father Taro who is the chairman. He is a great businessman and even though he is confident about his popularity within the company, he feels irritable and anxious when his second brother Rintaro returns to Japan. He plots to kill off the seaside resort development project that Rintaro is in charge of and repeatedly opposes him.

Kaga Takeshi as Hasuda Taro
The father of the three Hasuda brothers. He is the Chairman and CEO of Hasuda Trust, a large real estate company. He makes his second son Rintaro come back to Japan from London in order to entrust a resort development project that is important to the company to him.

Theme Song
Kaitou by back number

This blog contains information and musings on current and upcoming Japanese dramas but is not intended to be comprehensive.
View all posts by jadefrost →
This entry was posted in NTV, Spring 2021 Dramas and tagged Ayano Go, Imada Mio, Ishihara Satomi, Koi wa Deep ni, Otani Ryohei. Bookmark the permalink.